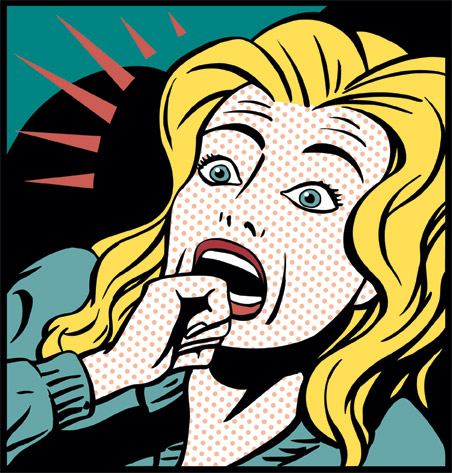 A woman contemplates what five decades of living really means.

I’m turning 50 this month. But it’s starting to feel like someone else’s party.

You know the drill. As soon as you hit 49, everyone wants to know how you’re celebrating the Big Five-O. There are serious social expectations that you’ll greet the Big Day with a Big Splash. A quiet hello to one’s second adulthood, second act, third age or whatever sociologists are calling it these days is, apparently, taboo.

Call me chicken, but I cringe at the idea of a party invented mostly for the sake of poking fun at my unwelcome ascent into the ranks of the AARP. Frankly, the only fantasy I’ve fostered is going to a Tom Jones concert so I could toss my hotel room key onto the stage, pretending for a moment that it was 1969 all over again and that I were a younger and prettier version of myself. Which in itself is a very telling statement about how it feels to be facing 50.

As Erica Jong writes in her memoir, Fear of Fifty, women are terrified at turning 50 because we don’t know what we can become when we are no longer young and cute. Living in a cosmetic-surgery-obsessed society, where aging is viewed as some sort of horror show instead of just another phase of life, doesn’t help any, either.

Thankfully, though, I’m more inner-directed than outer. So while I would be lying if I said I didn’t wish I would wake up one day to find that Dr. 90210 had visited in the night and given me back my 35- or 39- or even 45-year-old face, the things that are haunting me most go a lot deeper than any surgeon’s scalpel.

Don’t get me wrong: I am deeply grateful for what I’ve got. Overjoyed, in fact. At 50, many of us have lost at least one parent (as I have) or are taking care of elders who are fighting Alzheimer’s or cancer or some other disabling disease. There’s nothing like the wake-up call of mortality to remind us how lucky we are to be healthy, whole (and, furthermore, simply sucking air). Sure, we might complain about our aching backs, our overactive bladders or that crepey skin that is suddenly creeping around the knees. But if we’ve made it this far without some dreaded disease or loss of limb (or mind), we are more than fortunate. Which, I suppose, is reason enough for the boisterously boozy blowouts that frequently mark this rite of passage.

But you’re still going to wake up the next day and ponder what it all really means. On his 50th, my boyfriend downed multiple margaritas, donned a silly sombrero and began impersonating an intoxicated, speech-slurring Judy Garland—over and over again. We laughed until our stomachs hurt. But the next morning, he pulled the covers over his head, muttering sadly, “I can’t believe I’m 50.” He got over it quickly enough—mostly, I think, by reminding himself that being around beats the alternative. But to deny there is some kind of adjustment process would, I suspect, only slow down progress. Like anything else in life, 50 is best faced head-on.

It is also, like anything else, as individual as our fingerprints. After talking to a few friends about how 50 looks to them, I was amazed at the disparity of their responses. Mixed in with the expected laments (“Will I have enough money for retirement?” “Will anybody hire me after 50?” “Will men find me attractive after 50?” “I can’t wait for the empty nest,” “I dread the empty nest”) were some I didn’t see coming. One said it didn’t mean a thing to her—“another day, another dollar.” Another said she was mostly bothered by how quickly she now gains weight, and how hard it is to lose it. Predictably, the clichés rolled in: “Age is just a number.” “It’s all in the attitude.” “It’s never too late to become what you might have been.” Some offered consolation and encouragement. “But you don’t look 50, Cathy.” “It gets better after 50—trust me.” And, my particular favorite (not): “50 is the new 30.” Oh, please.

For me—and, I suspect, for many—50 is a signal that it’s time to take stock (though, admittedly, some are more preoccupied with stock options). Where have we been and where are we going? Are we comfortable with the choices we’ve made in our lives? If not, is it too late to do anything about it?

These questions began nagging at me last year, when I suddenly found myself applying to graduate school, thinking maybe there was still time to reclaim one of my original dreams: to be a college counselor. I was accepted into the program and planned to start in the fall. But when I was hit with a whopping tax bill the following month, the cold splash of reality stung my face. How on earth did I realistically expect to finance this? And then—the more crucial question—how old would I be when I finished? When my calculations turned up the magic number of 54, my fantasy fizzled. Nobody hires you after 50, after all. Right?

At 40—even at 45—I was comforted by the thought that there was plenty of time for such changes. I’d like to think there’s still time now, and I’m trying to get past this mental hurdle because I certainly don’t want to greet the Big Five-O in a negative space. But I doubt I’m the only one with an eye on the clock, and it seems appropriate here to say so.

Still, the better part of wisdom says that radical career change (or radical change of any kind) isn’t necessarily the key to making the most of one’s 50s. Maybe it’s all about—pardon the expression—baby steps, as long as they move you in a joyful direction. If time truly is running out, don’t we owe it to ourselves to move fast and furiously toward the thing that makes our little heart go pitapat, whether it’s picking up a paintbrush or, in my particular case, a guitar or microphone?

Beyond the quest for self-fulfillment, other new questions are buzzing around my brain. If I died tomorrow, is there any important business that would be left undone? Are my papers in order? Should I burn a CD to be played at my celebration of life, write my own obit? Should I try again to rebuild a relationship with my father before it’s too late?

I didn’t set out writing this essay to reach any big conclusions. But maybe it goes something like this: At 50, we’d like to think we’re old enough to have all the answers. But then we realize there are no answers. The key lies in being wise enough to ask ourselves, at long last, the right questions.