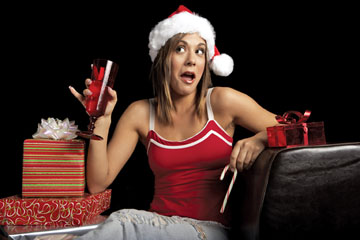 Party with your co-workers&emdash;and still have a job come Monday.

When I caution you to drink minimally at your company’s holiday party this season, know I do so from personal experience.

It would have been bad enough had my drunken antics at an office holiday party years ago (different job, different industry) been limited to slamming down three glasses of cognac (a drink that’s meant to be sipped, mind you) in a row, eating off co-workers’ dinner plates and, as the night wore on, developing a frightening inability to sit upright without assistance. But all that paled in comparison to what happened during the gift exchange. I had brought a Green Day CD&emdash;Dookie, to be specific&emdash;and all evening I had been ambivalent about giving it up. When I ended up with a coffee gift set (I’m not a coffee drinker), well, I didn’t exactly hide my disappointment, expressing obvious displeasure about the coffee and whining audibly about the now-forfeited Dookie. Oh, did I mention that the gift set was from the company’s president, who had flown up from Southern California to attend the party?

Luckily, that job was only a temporary stop on my career path and, through that holiday party experience, I learned a valuable lesson: Don’t be fooled by the word party. Work-related holiday gatherings are not the place to see who can do the most shots in an hour. But not everyone knows this. Just ask local etiquette experts.

When the business and social meet, it’s kind of scary, says etiquette expert Rebecca Black, owner of Etiquette Now!, a social and business etiquette consulting firm based in Davis. You know your rules when you are at the office, [but] when you mix it with social, the lines become blurred.

In fact, when it comes to office party behavior, it’s better to err on the side of worklike conservative. Shirley Willey, owner of the Carmichael-based Etiquette & Company, which teaches business etiquette to professionals and college students, describes company holiday parties as an extension of the workplace, only with holly and eggnog.

Following are eight ways to make sure this year’s company bash is not your last.

1. Drink minimally, if at all. It is the No. 1 hot button on the poor-form scale&emdash;drinking to excess, Willey says. That’s not surprising, considering almost every company party horror story involves an overuse of alcohol. It’s a fact: Lowered inhibitions can spell trouble.

Drinking to excess doesn’t just lower your inhibitions, it lowers your gross motor skills. At her construction company’s holiday party last year, Mary watched as co-worker Karen attempted to get down on the dance floor after downing too many cocktails. Instead, she fell down on the dance floor multiple times, ending up with a broken foot. Karen’s cast, which she had to wear for a couple of months, served as a reminder to her&emdash;and her co-workers&emdash;of her night of excessive drinking. I’m sure it will be talked about for years to come, Mary says.

2. Save the hootchy-mama clothes for the nightclub. All that time at the gym may have rendered you a righteous rear end, but the company party is not the time to display your buns of steel with a backless dress that goes down to there. Same with the front end. Whether you’ve been graced by nature, a good cosmetic surgeon or Victoria’s Secret, keep the sisters stashed away. Spilling-out-of-your-dress cleavage won’t up you any rungs on the professional ladder (and may instead garner you attention you’d rather avoid).

Men aren’t completely off the hook when it comes to appropriate attire, either. Jeans and baseball caps are usually no-nos, as are T-shirts and sandals. A good rule of thumb for both sexes: Always dress up a notch, Willey says. You can always remove a tie or string of pearls.

3. Act classy, not cliquey. The company party is not the time to hang around with the same old gang. One of the reasons to even attend the holiday party is to network. This is supposed to be an event of inclusion and celebration, says Black, who also cautions against complaining and gossiping and advises listening more than talking. Circulate, avoid twosomes, and try to spend at least 10 minutes in each group, Willey says.
Also remember the party is not the time to exchange gifts with your office buddy. This is best done outside of the party, away from the office even, not in front of the rest of your co-workers.

4. Choose your date wisely. Your own behavior may be beyond reproach, but if your date is slammin’ down drinks at the bar, bumping and grinding on the dance floor or otherwise acting inappropriately, it’s going to reflect on you in your boss’s eyes.

Your date may be your biggest fan, but you don’t want her telling your boss how much you deserve a raise. Your date may really like the dinner, but having him gnaw a piece of chicken right down to the bone isn’t going to impress your host, even if your host is Emeril. And the last thing you want is for your companion to sit there like a bump on a log.

Well, actually, if you’re Jim, maybe you do, considering his date, Linda, and her out-of-control behavior at his engineering company’s gathering. Linda, it seems, failed to understand the concept of know your limit in regards to alcohol. Heavily intoxicated, she tried to persuade the bartender to give her free drinks (even after being cut off), lost her shoes, openly flirted with other men at the party&emdash;many of whom had wives or girlfriends present&emdash;had a crying fit and threw up in the bathroom repeatedly. The highlight, according to Jim’s co-workers, involved her antics out on the dance floor, which included a futile attempt to do the splits (and resulted in her toppling over). Let’s just say that all that was missing was the pole, recalls Jim’s co-worker Mike.

5. Eighty-six the public displays of affection. Holding hands is tasteful, holding butts is tacky. As Willey cautions, Don’t get tangled up in the mistletoe&emdash;literally and figuratively. And if such displays involve a co-worker, go splash cold water on your face&emdash;or wherever else you might need it.
But if twinkling holiday lights and the warmth of the season prove too much for you and your date to hold back your affection for each other, make a point to leave the gathering for a private locale.
And the nearest utility closet doesn’t qualify.

6. Remember, this is a holiday party, not a Christmas party. While the proliferation of Christmas trees and images of Santa clue us in to the fact that Christmas is the dominant holiday this time of year, respect and acknowledge that your co-workers may not all celebrate Christmas. Don’t discuss religion&emdash;or politics, money or sex for that matter, Willey says. Safe topics for casual conversation include holiday plans, recent travels, great restaurants, pets and sports. Keep it fun and open, she says.

7. Be a gracious guest. First of all, show up. The office party is not something to blow off, even if you don’t stay the whole evening. If it’s an open house, I would suggest staying for at least 30 minutes; if it’s a dinner, stay for the meal, Willey says. On the flip side, don’t overstay your welcome, she cautions. Take your cues from your host and don’t be the last to leave.

And don’t forget to thank your bosses. Black says to thank them for their guidance, for the party and for the work. Willey suggests saying your thanks in writing. A thank-you note is the best 39 cents you can spend in business today, she says. It’s such a reflection on the class act that you are.

8. Gift appropriately. The company gift exchange is not the time to show up with a $185 sterling silver pen from Tiffany & Co. A simple gift is a nice gesture but it shouldn’t be too elaborate. We never want to appear as if we’re apple polishing, Black says. Make sure your gift is gender- and religion-neutral, she advises, suggesting a gift certificate to Starbucks. Other great gifts, according to Willey, include gift certificates to movies, treats for pets, travel books, potted plants and anything gourmet. It doesn’t have to be extravagant, just personal, she says. Give a gag gift only if you know that’s the theme, and even then, do so tastefully. Black recalls someone who brought a Christmas tree&emdash;decorated with condoms&emdash;to a company gift exchange.

And finally, don’t bring a gift you really want to keep for yourself and will regret relinquishing at the party. That’s advice from personal experience!

Although the company party is not officially work time, unofficially it is. While it’s a bad scene if an employee’s behavior gets out of hand, when it’s the boss wearing the lampshade, it sets the tone for the rest of the staff and could create liability issues. In best-case scenarios, it just leads to good water-cooler talk.
When the owner of the company Jane worked for showed up with not one but two gifts, it seemed like a generous gesture. The vibe changed when the gifts&emdash;part of a gift exchange game&emdash;were opened. Turns out the big boss brought sex dice with flavored body paint and a blow-up doll. Most people thought it was pretty funny that he thought it was appropriate, but others who hadn’t been there as long just were dumbstruck, Jane recalls. The best part was at the actual party, because he laughed so loud when those gifts were opened. It was extensive water-cooler conversation the next year.

And it’s all well and good when the boss can let down his hair and have a drink with the gang. But when you have to accompany him to the bathroom, well, that’s carrying employee bonding a bit too far. Doug’s heavily inebriated boss asked for assistance to the men’s room during their company’s holiday party. Doug reluctantly obliged, only to be thanked unintentionally with a shower of vomit. I had a new office with a corner view within two weeks. True story, Doug says.

Finally, being able to get out and boogie on the dance floor with everyone is one thing, but finding yourself dirty dancing inside a hula hoop with a female employee is quite another. That’s what happened at Sue’s company bash one year. The man&emdash;a division vice president who oversaw between 3,500 to 4,000 employees&emdash;later vomited in the elevator on his way up to his hotel room. After that incident, our parties were never the same, Sue says. They were very serious, more formal dinners with very little alcohol served. Gone are the days of relaxed get-togethers where everyone actually got to know one another.

There’s Nothing Selfish About Self-Care