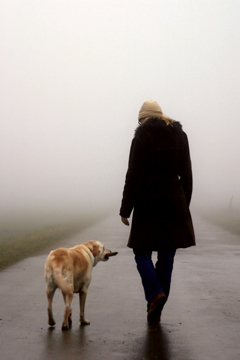 It’s January and the pea soup is upon us. Read how one local citizen copes.

Back in my younger years, I had a boyfriend who, for a time, resided in a vintage Airstream on a slough south of Sacramento in the Delta. He and the Airstream hunkered down on a low-lying section of Ryer Island that faced two obstacles every winter: too much rain and too much fog. Both could be deadly.
But because I was young and crazy, I’d make the winter drives from Sacramento to Ryer Island, taking at least one and sometimes two ferries to get there. Most of the year, the journey was heavenly. I love the rivers that feed and surround us, that bless and curse us depending upon their moods. In winter, however, I made many unwise drives along tiny roads atop precarious levees in heavy fog, often in the deepest dark of night.

I would sometimes crawl along those roads in my tiny Honda, desperate for clarity, something to guide me through the thick, cold air, or at least for a helpful car&emdash;even a truck&emdash;to follow, grateful for the lights of Sacramento when they appeared in the distance. I was terrified, every time.
And one foggy night just before I left for home, this boyfriend said to me, in a rare Zen moment (or perhaps a sarcastic one), You need to embrace the fog.

So I tried that very night, breathing deeply as I careened around the sharp curves of the levees, knowing the thick wall would occasionally break open into clean dark. I learned to have faith in the drive, tried to find metaphor in journeying without seeing clearly, decided I would not be intimidated by a high-pressure cloud trapped on the ground.

It was the beginning of one Central Valley girl’s quest to embrace the fog.
Fog does not come on little cat feet here. With apologies to Carl Sandburg, ours, as every local knows, arrives by dump truck, as if celestial beings backed up a super-duper big loader and deposited pile after pile of thick white mist that instantly gets sucked to the ground.

You say fog to people from Nebraska and they think San Francisco&emdash;wispy, slow-moving, low-hanging clouds that drift lazily and, with luck, lift into sparkling cold blue skies.

We know that fog means tule, and we don’t mean elk. We know fog as a dense curtain that hits the ground with a thud and stays there. For days and days and days. We know the experience of driving to Auburn or El Dorado Hills just to catch a glimpse of sun. I have friends who linger under their happy lights for much of January to lift their spirits.

It’s a tough, tough month, no matter how you cut it.

Although I have been known to decamp to Hawaii, when possible, in early January, that still leaves approximately two to four weeks to practice embracing the fog. Here’s some of what I do:


Walk a levee. It’s here, so why not go out in it? Sure, it’s cold&emdash;bone-biting cold&emdash;but a brisk walk on a levee (I’m fond of the ones on the American River) gets you a great view, especially of winter wildlife taking wing or burrowing in. When the old dog used to get squirrelly in the winter, he and I took to the levees around Sac State on the pretense of checking the water level, although he tugged hard on his leash trying to flush birds and real squirrels. As the river rises, this can either be scary or a testament to the powers of engineering, depending on where you are.

Or your favorite park. Trees look ghostly in fog, so your favorite park takes on a new coat and wears it well. If you’re at all inclined, take along pen and paper and make up new similes for fog&emdash;dense as a . . . or white as a . . .&emdash;or a sketchpad. Bundle up and hit one of the biggies (Capitol, McKinley, Land, Goethe, Discovery, Hoffman, even Folsom Lake State Park) or a neighborhood smallie. Swing on a swing. Admire the bare trees and skinny stalks that will grow roses in a few months. Toss food to the ducks and geese (if there are any) or just walk. I admire the fishermen and women hip-deep in the frigid water at places like Sacramento Bar across from the Lower Sunrise Recreation Area. That’s what I call embracing fog!

Jik Jak. I’m talking ice cream, my favorite flavor made by Vic’s, sold at the original Riverside location and at Burr’s Ice Cream in East Sac (which in my mind is really Vic’s East). Jik Jak, a blend of chocolate ice cream, fudge, malt, cinnamon and almonds, is easily my quickest way to winter nirvana. It’s not a flavor for everyone. (You either like it or you don’t, the servers tell you, and they let you sample.) Sure, it’s cold, but eat it inside a cozy ice cream parlor on a winter evening with other sufferers around you, and it just makes life a little better. Note: Jik Jak is one of Vic’s winter flavors. It’s only made Octoberish through Januaryish. It’s gone by spring, like the fog. Get it while it’s here.

Drive the Delta roads&emdash;carefully. Ride a ferry. Either heading up or downriver, driving the levee roads (very, very carefully) in winter is like heading to Middle Earth. It’s mystical&emdash;the mighty Sacramento can be churning like a washer or imitating the Big Muddy in Mississippi, but this is our great river Delta. There are dozens of miles of roads on both sides, with some fabulous old bridges crossing the water at many points. I particularly love the drive south through the storybook towns of Locke and Walnut Grove. There are many places to safely pull over and watch the water run toward the ocean. And take your car on the Real McCoy ferry from Rio Vista to Ryer Island or the cable J-Mac ferry across Steamboat Slough to Grand Island&emdash;two of the best short, free rides on water.

Have tea with a friend, preferably by a warm fire. My late husband courted me over steaming mugs of tea by a roaring wood stove in his grandmother’s old miners’ cabin not far from where gold was first discovered. It worked. I think there’s something magic about fire and something hot to drink with someone you like. Think of it as a good reason to call a friend you’ve not seen in too long and suggest a visit in a cozy place.

Binkit and a book/movie/snuggle. Even better, if you have a loved one, someone you can cozy up with, there’s no better excuse than It’s soooooo cold out there. You can watch a movie or, if you’re both the type, read books under your favorite binkit on the sofa, or . . . snuggle.

Hit a bookstore with a friend. My best friend and I love to meet for dinner and then head to a bookstore for some browsing (sometimes buying) and hot chocolate in the bookstore cafe. It always banishes our blues and gives us new conversational material.

Or, if all else fails, escape. You could try:

Driving to the snow. For those who prefer their winter water solid, remember that there’s often sun up Tahoe way while we’re drowning in the tule fog. And if you engage in winter sports, January can be the best time to find swell snow not far away.

Driving to the sun. For those who, like me, prefer nonsolid water, that aforementioned drive up Interstate 80 to Auburn or Grass Valley or up Highway 50 to El Dorado Hills or even Placerville often delivers sun. Schedule a lunch stop at a favorite restaurant or explore new spots you otherwise might ignore. Ironically, you might consider driving to the North Coast or San Francisco, a city known for fog. In winter, it’s frequently warm and sunny there&emdash;far less so in summer. Remember that Mark Twain is thought to have said, The coldest winter I ever spent was a summer in San Francisco. Yes, but winter days often sparkle there.

Flying to a tropical island. Pack it in. Make airline reservations. Hawaii’s cheap after the New Year’s crowd comes home. Sometimes it’s a lot easier to embrace the concept of fog from a sandy place with occasional warm, friendly rain showers and the smell of plumeria in your nostrils.

I say, whatever works.