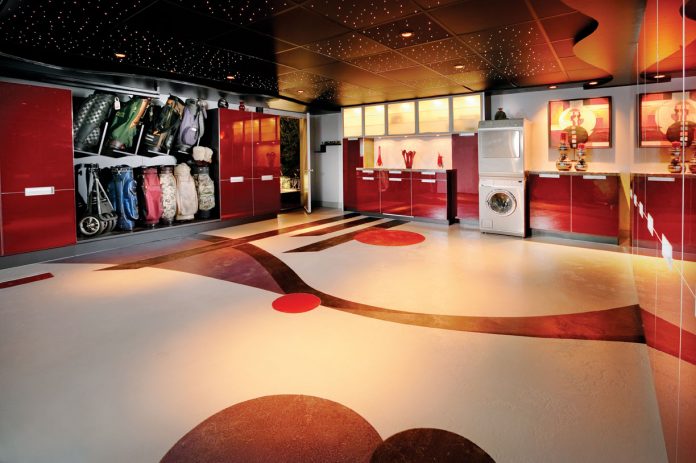 America’s love affair with the car spills over to the parking space.

Move over, kitchen: Americans have rediscovered the garage. Search HGTV.com and you’ll find tips for cleaning, decluttering, reorganizing, renovating or tricking it out, if that is your desire. If it’s not, the photos of gleaming floors, shiny cabinets and cobweb-free storage may have you casting hungry eyes at the space you usually scamper through on your way to the house. On Amazon.com, you’ll find a bumper crop of books that clearly show the garage is not just a scrap heap or a place to park the car. Last year, the National Association of Home Builders announced that Americans spent $3 billion on garage renovations. That’s not construction; that’s remodeling and renovation, says Bill West, the Fort Collins, Colo.-based author of Your Garagenous Zone: Innovative Ideas for the Garage (Paragon Garage Company, 2004). West says he fully expects the trend to keep ramping up until no one remembers how awful garages used to be. After all, he adds, it’s really a drive-in closet.

Campus Commons resident Jeanne Reaves took on her garage as the final phase of a whole-house remodel. I needed to put some new cabinets in, she says. I wanted something that was fun . . . something that would make me feel good.

The immaculate concrete floor has a snazzy etched-in design in gray, black, violet and cranberry&emdash;the ideal accent for her brazenly red German-made Poggenpohl cabinets. Reaves shelved the idea of red cabinets in the kitchen, but the garage? Perfect.

What’s sure to bring any garage-remodeler wanna-be to her knees are Reaves’ nooks, bins, pullout shelves, drawers and cabinets. There’s a place for golf shoes and socks, jackets, tools, books and laundry supplies. There’s even a cabinet designated for changing the hangers on clothing fresh from the cleaners.

Oh, there are lots of special things going on, says Oliver Aden. A principal designer with Poggenpohl Kitchens on Power Inn Road, he’s been working with Reaves on her home’s interior and knew she wasn’t interested in the garage as a second-class space. Everything was very well thought out, he says. Obviously, Jeanne wanted to create a special look in terms of design, but it was also important to figure out what goes where. For example, Reaves’ nine golf bags were measured so they would fit precisely into their own niche. To make access to top shelves a snap, a stepladder was designed into the base of one of the cabinets.

When the conversion was nearly complete (a bench for putting on her golf shoes is still in the works), Reaves celebrated by inviting in a crowd of friends and people who worked on the project. But she doesn’t need a reason to turn the garage into party central. At the flip of a switch, a mind-bending display of fiber optics turns the black ceiling into a galaxy of twinkling lights. It’s really over the top, Reaves says, laughing. There wasn’t any place in the house where I could do this. So when I did the garage, I thought, hmmm: I could do that out here. I really did want something that would make me smile.

The surprising part? With all that glamour going on, Reaves still uses the garage to park her cars.