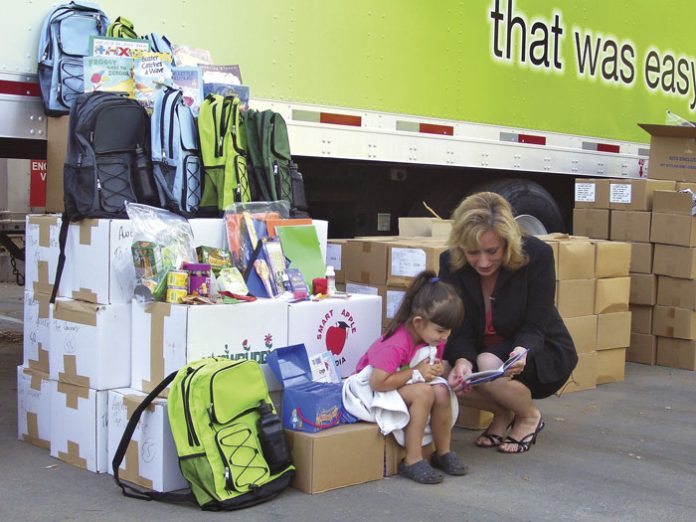 Economic times may be tough, but they’ve inspired new ways of thinking about how to meet the many needs of our community.
That’s the conclusion of the Community Services Planning Council’s president/CEO, Nancy Findeisen, after reviewing the nominees of this year’s People Helping People Awards, which honors local businesses, organizations and individuals for their contributions to bettering our community.
“People and groups are looking beyond money and engag-ing in a whole range of service,” Findeisen says. “There’s a lot of creativity going on.”
Of the 58 nominations for this year’s awards, all were of high quality, she says, which made choosing the winners exceptionally hard.
“We want to see everyone recognized, and we’re exploring ways to do that throughout the year,” Findeisen adds. “For now, our winners are some wonderful people and organizations doing special work that makes you proud to live in this community.”

The Executive Leadership Award
Winner: Sotiris Kolokotronis
As founder and owner of SKK Developments, Sotiris Kolo-kotronis has left an indelible footprint on the Sacramento region. His developments include more than 1,500 single-family homes and 1,200 apartment units, in addition to retail and commercial space. Somewhere amid all those projects, he has found time to serve and support almost 30 community organizations, including WEAVE, River Oak Center for Children and the Crocker Art Museum. As Rachel Iskow of the Sacramento Mutual Housing Association puts it, Kolokotronis’ volunteer work demonstrates his “deep commitment to the Sacramento region, compassion for the people who live here and an admirable vision for our future.”

The Dick Cable People Helping People Media Award
Winner: CBS 13/CW 31
Never have the words stuff it helped so many. In 2008, the CBS 13/CW 31 Stuff the Bus campaign collected thousands of dollars’ worth of backpacks, school
supplies, toiletries and other necessities for more than 5,000 homeless children throughout the region. Now in its fifth year, Stuff the Bus aims to break the cycle of homelessness by giving these children the supplies they need to attain educational—and lifelong—success.

The Exceptional Community Support Small Business Award
Winner: Barcellona Inc.
Since 2006, Barcellona Inc. has taken on—with great success—all the marketing and public relations programs for HomeAid Sacramento as a pro bono campaign. HomeAid Sacramento—the philanthropic arm of the North State Building Industry Association, which supports the building of dignified housing for homeless families to help them rebuild their lives—has seen tremendous increases in both monetary and in-kind support, as well as increased reach to its target audiences as a result of Barcellona’s design work, website development and marketing expertise—valued at more than $150,000.

The Exceptional Community Support Award
Winner: Delagata Corporation
Delagata supports more than 40 community organizations through two initiatives: Building Bridges, which promotes understanding, tolerance and unity; and Closing the Gap, which focuses on helping people with limited resources pursue a better future. Both initiatives made great strides this past year. For example, Closing the Gap delivered hundreds of thousands of dollars in employees’ time, expertise, materials and financial assistance to provide high school students with scholarships, internships, tutoring and counseling to increase their academic performance and connect them with potential employers.

The Hands On Sacramento Award for Encouraging Employee Volunteerism
Winner: Pulte Homes, Sacramento Reno Division
From 2004 through 2008, Pulte Homes, in cooperation with John Laing Homes, oversaw the planning and construction of PEACE for Families’ 12,500-square-foot shelter in Placer County for women and children victims of domestic violence. (PEACE stands for Placer Extends A Caring Environment for Families.) Pulte donated more than four years of staff time to the safe-house project, from the land and purchasing departments to the construction team. Now complete, the PEACE for Families shelter is expected to serve more than 3,000 women and children this year alone.

The Sustained Community Support Award
Winner: UC Davis Health System
For more than four decades, the UC Davis Health System has been mobilizing its manpower—and its money—to benefit the Sacramento region. One in four UCDHS employees volunteers in the community. From the maintenance staff to the corporate suite, employees contribute more than 5,500 hours every year in direct, hands-on volunteer work. This past year, UCDHS and its employees helped more than 14,000 local residents and provided more than $100 million in uncompensated health care to individuals and families who couldn’t afford to pay for it themselves. That’s on top of $500,000 in annual cash donations and sponsorships UCDHS gave to assist local nonprofits in serving low-income, disabled and uninsured people.

Youth Volunteer Award
Winner: Rebecca Krumdieck
A Girl Scout for more than 13 years, Rebecca Krumdieck is no stranger to volunteer projects. To pursue her Gold Award, the highest award in Girl Scouting, she needed to come up with a special community service project. Her idea came to her after visiting Woodcreek Nature Center in Roseville, where she learned hyacinth—an invasive water plant—was choking out native plants, creating a breeding ground for mosquitoes and preventing birds from fishing in the Woodcreek wetlands. Krumdieck worked with the city of Roseville and Woodcreek Nature Center to plan, promote and conduct a cleanup event focused on removing the hyacinth. She even organized a free lunch for the more than 170 volunteers who showed up to help. To make sure her project lives on, she developed a poster and a skit to educate area elementary school students about invasive plants at the nature center.

The Service Club and Association Achievement Award
Winner: Kiwanis Club of Placerville
When a crisis occurs or when people just need help, the Kiwanis Club of Placerville is one of the first groups to step in and make a difference. This past year alone, the 58-member organization raised more than $35,000 in two weeks to help communities hit by South Lake Tahoe’s Angora fire, and provided holiday baskets and toys to more than 50 local families. That’s in addition to distributing more than $30,000 in scholarships and other support to 25 local child and youth programs.

Senior Volunteer Award
Winner: Reuben Jessop
After retiring from the United Way in 1985, Reuben Jessop made El Dorado County his new home with every intention of contributing something to his new community. Now, almost 25 years later, it’s fair to say he’s accomplished that mission and more. In 2005, Jessop and two other citizens founded United Outreach of El Dorado County, dedicated to helping the homeless in the area. By the end of 2007, United Outreach helped provide food, shelter and showers to more than 300 county residents. In addition to serving on the boards of United Outreach and Job One, Jessop is a weekly literacy volunteer at Folsom State Prison, belongs to the Rotary Club of Cameron Park and serves as president of his church council.

Unsung Hero Award
Winner: Gordon Christensen
They call Gordon Christensen the “Kan Man.” For almost 10 years, ever since he was diagnosed with diabetes, the retired heating and air conditioning technician has been collecting and recycling aluminum cans. All of the money he earns—more than $50,000 so far—gets donated to local charities. One of his biggest beneficiaries has been the River Oak Center for Children.

Special Award: Association Exceptional Community Impact
Winner: Sacramento Metro Chamber of Commerce—Leadership Sacramento
Since 1985, the Metro Chamber’s Leadership Sacramento program has been preparing future leaders for decision-making positions and service-minded roles that benefit the Sacramento region. As part of that program, every year the all-volunteer class takes on a community improvement service project for a local charity, program or nonprofit. For the past 24 years, Leadership Sacramento’s classes have been making an incalculable contribution to the region. Since 2001, the program’s projects have contributed almost 5,000 volunteer hours and more than $330,000 in cash, grants and in-kind donations to organizations such as the Sacramento Crisis Nursery, Mercy Education Resource Center, Women’s Empowerment and Lilliput Children’s Services Kinship Support Services Program.