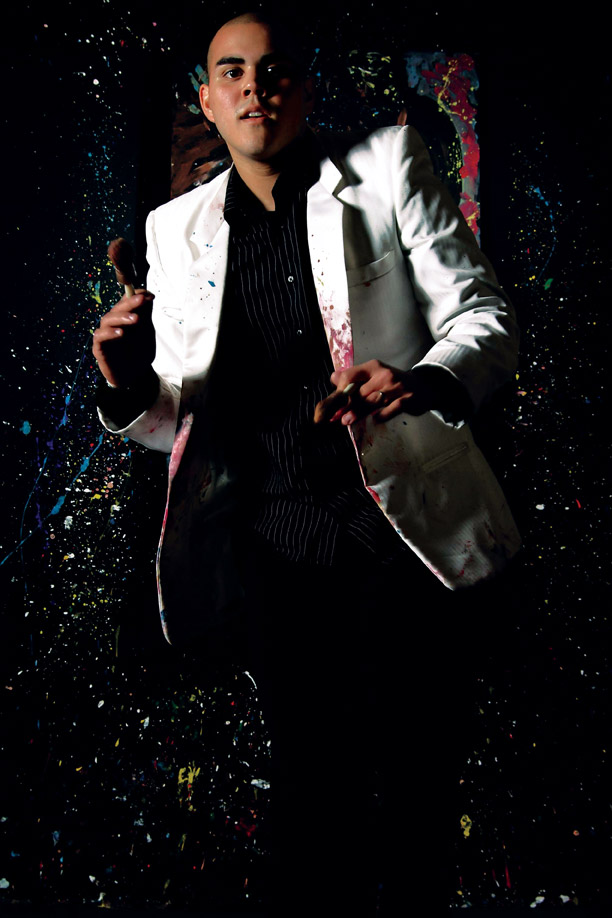 A swath of brown. A dab of black.

A slash of white. With a paintbrush in each hand, David Garibaldi bounds and rebounds from a 6-foot canvas on stage. Hit the Road, Jack plays at a heart-thumping volume. Garibaldi whirls, swirls, jumps as he loads the brushes with paint and leaps at the canvas. Five, six, seven minutes pass. The song ends; an image emerges. What is it? Garibaldi turns the canvas upside down. It’s Ray Charles. The crowd laughs. Cheers. Applauds.

Garibaldi burst onto downtown’s nightlife scene in 2003, mostly working clubs and bars, painting music greats like Charles, Bono, Prince and Jagger. Today, his Rhythm and Hue show (garibaldiarts.com) is a smash hit at $500-a-ticket fundraisers, concerts and corporate get-togethers. And this fall, he’ll be painting one of the most famous faces in the state.

Where do you perform?
I’ll do anything from a talk at a high school to a fundraiser for the Sacramento Theatre Company to a concert in New York.

Ever paint anybody other than popular musicians?
Beethoven, Einstein. I did Csar ChÃ¡vez for the Sacramento Hispanic Chamber of Commerce.

Ever paint anyone who happened to be in the audience?
Yes. Those are the most challenging because they’re right there watching you. . . . I’ll be painting the governor at a private party this fall.

Are you nervous?
Yes.

Where do you want your career to go next?
All I want is to connect with people and be an inspiration for them to live their lives with passion. That’s what I really want. At $50 a pop, the World Cocktail served in New York’s Trump World Tower gained fame for a while as the planet’s priciest mixed drink. Seems like everyone’s got one now, including the MGM Mirage in Las Vegas, where they shake up a $100 margarita. Is Sacramento measuring up at the bar? At Il Fornaio on Capitol Mall, we are. Savvy sippers there finish off their Italian repasts not with a mixed drink but with a snifter of Louis XIII de Rmy Martin Fine Champagne Cognac. (Trump’s World Cocktail is concocted with Rmy Martin XO.)

Made with grapes from the Grande Champagne area of Cognac, France, Louis XIII is poured from a handblown Baccarat bottle designed especially for it&emdash;a fitting vessel for what some say is the world’s finest brandy. It’s very prestigious, says Daniel Shinaut, Il Fornaio’s GM, adding that he has sampled it and finds it sufficiently impressive to recommend. It’s the home run . . . the top of the game. And at $125 a glass, decidedly world-class.

It’s cool, it’s hip, it’s so . . . compact. While living the loft life may seem like a no-brainer, if you’re moving from, say, a 3,500-square-foot home into a 676-square-foot loft, or even a 2,092-square-foot loft penthouse, what are you going to do with all your stuff? Lucky you, the folks at L Street Lofts understand your dilemma. This summer, at their first loft-living workshop, architect and interior designer Donald Fugina fielded lofty questions from buyers and inquirers. What did they want to know? Among other things, how much stuff they would have to pitch if they bought.
Want to find out how much stuff you won’t need if you slip into an urban identity? Call (916) 446-5638 to sign up for this month’s loft-living workshop, Sept. 13 from 6 to 7:30 p.m. at Fugina’s showroom, 2620 21st St. Call the same number to take a hardhat tour of the new lofts at 1818 L St. There’s one every Friday.