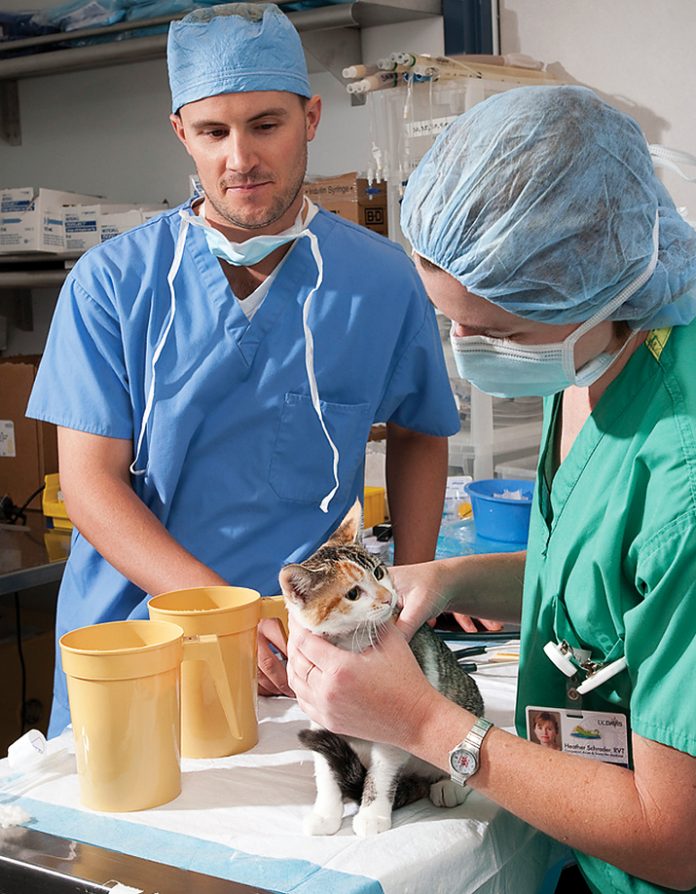 Fiona was one sick little dog.

After inhaling a foxtail during a run with her owner, the year-and-a-half-old Chihuahua was close to death. In a last-ditch effort to save her life, her owner—himself a vet—brought her to UC Davis’ William R. Pritchard Veterinary Medical Teaching Hospital, where a cardiologist performed a rare and risky surgery to remove scarring in her chest and around her heart. Six weeks later, Fiona was as good as new. Says her owner, Davis resident Rock Irvine, “We loved this little dog and felt she deserved a chance.”

For animals like Fiona, UC Davis’ world-class veterinary hospital is often the court of last resort—the place they go when there are no other options. It cares for the sickest of the sick: animals with acute kidney failure, heart defects, brain cancer, massive trauma and other life-threatening ailments.

If you are a pet owner and live in the Sacramento region, UC Davis’ vet hospital could one day save your animal’s life. It’s the veterinary equivalent of the Mayo Clinic or Memorial Sloan-Kettering Cancer Center—a place where medicine’s sharpest minds gather.

Located on the university campus, the vet hospital is one of the jewels of the UC system. California’s only veterinary teaching hospital, it treats about 30,000 animals a year, all creatures great and small, from horses to ferrets—even, recently, a zebra and a pair of Galápagos tortoises. While most of its patients live within 250 miles of the hospital, some come from as far away as Canada, the Caribbean, Europe and Asia.

How does UC Davis differ from a standard veterinary hospital? For starters, it’s a teaching hospital. So it’s staffed by faculty from Davis’ highly regarded School of Veterinary Medicine—board-certified specialists in more than 30 specialty services, from orthopedic surgery and oncology to cardiology and neurology.
By any measure, their workplace is superior to any other veterinary facility in the region—in fact, it’s better than many human hospitals. It operates an ICU and an emergency room. It has its own in-house blood bank. It offers diagnostic imaging services such as ultrasound, CT, MRI, digital radiography and nuclear medicine. And it has the most sophisticated equipment money can buy, from a heart-lung machine for bypass surgeries to a multimillion-dollar linear accelerator for tumor radiation therapy.

“There’s no place in California that has all this under one roof,” says veterinarian David Wilson, who runs the hospital.

Take, for instance, the cardiology department. It’s headed by Leigh Griffiths, a charming Englishman who recently began performing open-heart surgery on dogs, using the same equipment and techniques as his counterparts in human medicine.

The oncology department is another standout, offering state-of-the-art treatments such as stereotactic radiosurgery, electron therapy and intensity modulated radiotherapy. And the renal dialysis program provides traditional hemodialysis for animals in renal failure, plus therapies such as hemoperfusion (to treat animals that have ingested poisons such as antifreeze) and apheresis (to treat immune-mediated diseases such as myasthenia gravis, a neuromuscular disorder). There are only one or two other programs even remotely like it in the United States.

Anyone can bring a pet to UC Davis for primary care such as vaccinations, spay and neuter procedures, and checkups. And not just cats and dogs, but any pet: rabbits, lizards, birds, fish. But most animals are referred by an outside veterinarian because they have a problem that’s either too serious, complex or mystifying for the vet to handle. A golden retriever with a puzzling skin tumor, for instance, was referred to Davis’ oncology department, which diagnosed an unusual form of lymphoma. During an ultrasound, doctors at Davis found an even bigger problem: cancer of the spleen. The dog had surgery to remove the splenic tumor, then went on to have chemotherapy for the lymphoma.

Making sick animals well is only one of the hospital’s missions. Research is another. For patients, there’s a side benefit: If they qualify, they get to participate—at no cost—in clinical trials of promising new medicines and protocols. UC Davis, for instance, belongs to the National Cancer Institute’s trial consortium, giving patients with certain cancers access to treatments that aren’t available to the public.

Not every pet owner can afford the life-saving treatments available at UC Davis. And that’s OK, says Griffiths. As a teen, he worked at a vet’s office. A cat that had been hit by a car was brought in, and the vet said it was hopeless. “I thought to myself, ‘They’d never say that about a person,’” Griffiths recalls. “I don’t have to decide for a client if they should do something. But I think it’s important that we’re able to offer cutting-edge medical and surgical procedures for those who want them.”

A NEW BREED OF VET

Local veterinarians increasingly are turning to alternative and complementary therapies such as acupuncture, chropractic and Chinese herbs to treat animals with chronic conditions such as arthritis and allergies.
“It’s another tool in my toolbox,” says veterinarian Signe Beebe, owner and director of Integrative Veterinary Center in East Sacramento (pictured below). Alternative treatments for animals include reiki, homeopathy, magnetics and Eastern medicine practices such as acupuncture, ayurveda, massage, Chinese herbs and Chinese food therapy. All work by seeking to restore alignment to body systems and energy.

Both Western medicine and alternative medicine have their place in the veterinary world, according to integrative vets. “What I like to say is, if your dog gets hit by a truck, go to a Western trauma center,” explains veterinarian Kris Dailey with Animal Wellness Center in Davis. “But chronic stuff—this hurts here, that doesn’t work there—often responds better to complementary medicine.”

Alternative and complementary medicine are rapidly gaining acceptance with traditional vets and consumers. Both Beebe and Dailey get referrals from other veterinarians throughout the region. And as more pet owners embrace alternative treatments for themselves, they also seek it out for their companion animals.

In the Sacramento region, the most frequently requested alternative treatment is acupuncture, which works by stimulating specific points on the body, enabling the body to heal itself. It’s used to treat neurological disorders such as seizures, gastrointestinal problems such as diarrhea and colic, musculoskeletal problems such as back pain and degenerative joint disease, and chronic conditions such as hypothyroidism and skin problems. Marilyn Koski, a veterinary acupuncturist at UC Davis’ veterinary medical teaching hospital, says her service received a lot of calls following a recent Wall Street Journal story about acupuncture’s effectiveness.

Beebe recently saw a 5-year-old German shepherd cross suffering from autoimmune emolytic anemia, which destroys red blood cells. Even after being treated by a traditional vet with steroids, immunosuppressive drugs and blood transfusions, the dog was close to dying. Its desperate owner brought the animal to Beebe, who used acupuncture, along with Chinese herbs and food therapy. Eight months later, it’s doing great. “The dog completely recovered,” she says.