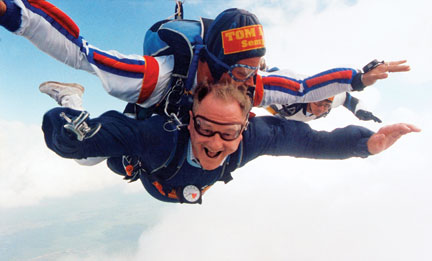 B.T. Collins packed a whole lot of living into his 52 years, and he attracted a lot of attention doing it.

He never could keep his mouth shut, a trait that earned him slots on all the major news networks and in many of the world’s best-known newspapers and magazines, says his sister Maureen Collins Baker in her new book, Outrageous Hero: The B.T. Collins Story. The book chronicles the life of a man who worked relentlessly for causes he believed in.

In 1967, Collins lost an arm and a leg in Vietnam, where he was serving as a Special Forces (Green Berets) captain. Afterward, he graduated from law school, passed the bar and worked as chief of staff for democratic Gov. Jerry Brown. When Brown appointed him director of the California Conservation Corps, Collins reinvigorated the organization, coining the motto, Hard work, low pay, miserable conditions. In 1981, while serving in that post, Collins called a press conference at which he drank a cup of malathion to prove to anxious corps members that they’d be safe working in a pesticide-treated environment.

Collins’ appeal&emdash;or notoriety&emdash;transcended party lines. In 1990, republican Gov. Pete Wilson appointed him director of the California Youth Authority. Soon Wilson asked him to run for the California Assembly, which he did, and he won. He held that office until his death from a heart attack in 1993. Aside from his irreverent behavior, he will be remembered as a tireless supporter of WEAVE and for championing the creation of the California Vietnam Veterans Memorial in Capitol Park.

Maureen Collins Baker will appear for a signing of Outrageous Hero: The B.T. Collins Story on June 4 at 7 p.m. at Borders on Fair Oaks Boulevard. Skiing was not out of the question for Collins. At a gathering of California Conservation Corps members, Collins states, I’m going to work you to death! Collins at the Vietnam Veterans Memorial in Washington, D.C.