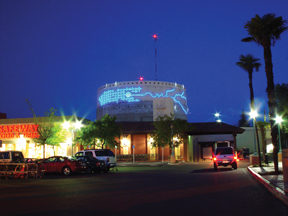 One hundred feet in the air, towering above 33rd Street near Alhambra Boulevard in East Sacramento, nearly 3 million gallons of water slosh gently to the vibrations of the city. Known as the Alhambra Reservoir, the polyhedron-shaped concrete tank that holds the water was built in 1937 and still stands like a sentinel, channeling water from surrounding tributaries and wetlands into Sacramento’s neighborhoods.

Throughout the years, the reservoir has confirmed its stalwart presence in various ways. During World War II, it was painted entirely in camouflage as a symbol of the conflict abroad. In the 1950s, the city installed a booster pump system to help maintain steady water pressure. In 1996, city work crews performed a seismic retrofit. The structure’s bottom 100 feet, once occupied by a blood bank, now house the special operations and training facility of the Sacramento Fire Department.

But it was not until 2004 that the function of the reservoir was more completely integrated with its outward appearance. The city of Sacramento, in conjunction with the Sacramento Metropolitan Arts Commission’s Art in Public Places program budgeted $360,000 for a work of art to adorn the ready-made canvas. Michael Bishop, a Fulbright scholar and professor of art at Chico State, designed the 400-foot-long aerial map that spreads across the west wall of the tower. Jagged strands of gold-colored aluminum stream into a circular icon of the tower that fills and empties with aquatic-blue light and then moves into a lattice. At night, the work of art can be seen for miles. It’s the grid of the water system and of the city. It goes from an organic form into a more geometric form, explains Bishop, who says the final stages of the project entail gathering tower-inspired drawings and letters from local schoolchildren to store in one of the vessels that decorates the side. Bishop included the 12-foot-tall embellishments to complement the relief of an Indian maiden pouring water out of a vessel above the main entrance.

This particular project raises some questions and issues about our resources, says Bishop. In fact, Bishop was able to secure a $15,000 advanced technology grant from SMUD that helped pay for the nearly 2,000 feet of blue LEDs (light-emitting diodes)&emdash;a technology that uses less electricity than neon or incandescent lighting. It’s not overtly there, but this project does suggest issues of maintaining our system and being dedicated to conservation, says Bishop. Good public art is contemplative&emdash;it makes you think and ask questions.