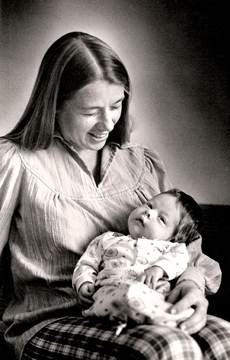 It was 1975. As Sacramento and the rest of the nation prepared for the bicentennial celebration of the signing of the Declaration of Independence, a pregnant woman named Glo Wellman moved from Detroit to Markham Way near Sacramento City College. She had just taken a job at the college teaching child development. Wellman says she quickly found obstetrics in Sacramento, particularly birth practices, to be mired in the past, and she set off to declare her own independence.

Wellman, 24 at the time, was determined to be an active participant in the birth of her first child. Women were winning the battle for rights everywhere but the delivery room, she says, where drug-addled mothers, often with doctor-mandated restraints binding their hands, gave birth without family support. A sterile, safe environment for newborn and mother, to be sure, but not a nurturing one. Wellman and a group of like-minded women formed the Society for Humanized Birth to push for change.

Birth for years before had been managed by the medical community, and there was just so much acceptance around that, that birth was seen by many as needing medical intervention, Wellman says.
Ann Reed was another founding member of the society. Birth was all about convenience for the hospital, she says. The women in this group were aware of the reasons hospitals were good places to give birth; they just thought the hospitals were out of touch and not willing to be kind and gentle.

The society, which grew to more than 70 local members, called for the empowerment of mothers in making medical decisions, the option for fathers and relatives to be present during birth, and for homestyle birthing rooms in hospitals. At meetings members educated each other on the birthing process, listened to talks from experts and launched letter-writing campaigns to area hospitals. With the help of progressive physicians such as Dr. Les Michaels along with his wife, Peggy, changes were made.

Wellman labored before the birth of her son, Wade, on March 19, 1976 in a new homestyle birthing room at what is now Sutter General Hospital. Wade was born by Caesarean section, but Wellman says her labor was eased by the homelike setting. The battle was not won, though. The county closed the birthing room shortly after it opened because it didn’t meet the health standards of the time, Reed says; the unpleasant delivery of her first child, Justin, that June was in a Sutter Hospital surgical suite. Both women say setbacks were inevitable, but they knew that with work, the society’s efforts would pay off. There were people around the nation that thought the same, seeing birth as a normal, natural process, a joyous process that should be celebrated, Wellman says. We were a powerful little group.

Wellman and Reed lost touch with the society as they moved out of the childbearing portion of their lives, and both say the group slowly faded away. Wellman left Sacramento after just 15 months in the city, moving to Santa Rosa, where she had two more children. Reed gave birth to her second child in 1977 and remains a Sacramento resident.