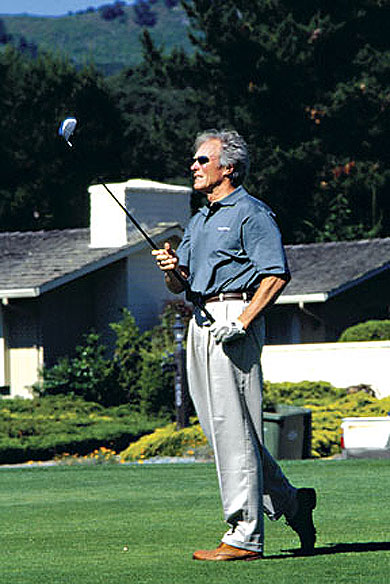 WHEN YOU HEAR CLINT EASTWOOD’S NAME

mentioned or see it in print, it’s frequently accompanied by the words, “consummate,” “legendary” or “treasured.” Eastwood is one of the planet’s most beloved movie stars, and his body of work as an actor, producer and director has secured for him most of his industry’s highest accolades, including the Oscar and a Life Achievement Award from the American Film Institute. He is part owner of golf’s Holy Grail: the Pebble Beach Golf Links. His wife, Dina, a former newswoman, is gregarious, good-natured and gorgeous. His clothing company, Tehama, is developing as an industry leader for smart, tailored looks for the links. What’s more, he owns a private golf course in Carmel that also bears the name Tehama.

Eastwood seemingly has everything going his way, but it’s difficult to conjure any green-eyed envy for a guy who appears to go about his business in a lunch-pail kind of way. Men would be on cloud nine sharing a pitcher of beer with him, while women would be in seventh heaven at a chance to get to know him. You just get the feeling he’s going to tell you the truth.

Golf Digest recently ranked Eastwood in the upper half of its Top 100 Celebrity Golfers, but when he steps up to the first tee, he’s one of us-another member of the foursome. And maybe that’s part of his ongoing fascination for the game of golf and part of our fascination with him.

Despite an extended location shoot for his latest movie and a schedule busier than a Pebble Beach tee sheet, Eastwood and his wife, Dina, made time to answer a few questions about golf and about life. Dina said, “This is about Clint. He’s the one people want to know about.” Most of the following then comes from Clint, but Dina’s few remarks are a delightful bonus.

WHAT WAS YOUR FIRST ASSOCIATIONAL WITH GOLF?
When I was in the Army, at Fort Ord (near Monterey), I was running the swimming program, and they had golf clubs you could check out and play with. That’s how it started. A couple friends and I went out and played . . . tried to play anyway.

WHAT IS THE ATTRACTION TO GOLF?
It’s a game that tests your concentration and self-control. And golf is always played in beautiful places: lots of lawns, trees, scenery. Tennis courts all look the same, but golf courses have such a nice, open-space feel to them.
Dina: “My father coached my high school team and, like most of the girls, I never took up the game. I later moved to the Monterey Peninsula and fell in love with a golf addict, so I caved in! I actually love it. It calms me down and lets me be competitive in a great way.”

HOW HAS YOUR ASSOCIATION WITH THE GAME OF GOLF CHANGED OR AFFECTED YOUR LIFE?
It’s enriched my life. I’ve met a lot of great people, and I guess the various people I have met through golf are people with like-minded interests.

MOST UNUSUAL THING THAT’S HAPPENED TO YOU ON THE COURSE?
There have been a few…
Dina: “Well, you stopped our wedding music as I was getting ready to walk down the aisle to allow my dad to finish on the 18th hole at Shadow Creek! (Both laugh.)

BEST SWING TIP?
I’ve had so many swing tips over the years, and they’ve all been good. The best is to continue the swing downward instead of sweeping it outward. That’s been told to me by almost every pro I’ve ever played with.

FANTASY FOURSOME?
Bobby Jones, Ben Hogan, Sam Snead and me. Julius Boros, if they were allowing fivesomes to play that day. Modern day, the people I’ve been fortunate enough to play with: Arnold Palmer, Jack Nicklaus, Gary Player.
Dina: Mine would be Clint, Michelle Wie and Tiger Woods or Vijay Singh if Tiger wasn’t available.

YOU’VE PLAYED WITH PRESIDENTS. WHO HAD THE BEST GAME?
Distance means a lot, because you have to be out there to get to use shorter clubs coming in to the hole. But I think “good around the greens” for scoring.
Dina: All Clint’s buddies and I call Clint the “chip-master.”

DOES A WAGER IMPROVE YOUR ROUND?
No, not always. It depends on whether you win or not.

HOW DOES NORTHERN CALIFORNIA GOLF STAK UP WITH THE REST OF THE COUNTRY?
Northern California has some of the best courses anywhere. If you think about Pebble Beach, Cypress Point, up to San Francisco Golf Club, The Olympic Club, and some of the smaller, lesser-known courses such as Fall River Mills, Coyote Moon, Lahontan, Edgewood in South Lake Tahoe, there’s a ton of really good ones around. Again, some of the best.

MOST MEMORABLE MOMENT ON THE GOLF COURSE?
I’d have to say getting a couple holes in one—one recently at Tehama. That was nice.

WHAT ERAS IN GOLF HAD THE WORST AND BEST CLOTHING?
Sixties styles were probably not conducive to playing.
Dina: All that lovely thick polyester.
The knickers and bow-tie look of the ’20s was a fun look. I don’t know how comfortable it was. I think the present day is probably the best.

HOW DID YOU GET INVOLVED IN THE CLOTHING INDUSTRY?
It started with talk at the bar with my friend Nancy Haley. She had left Sport Haley and wanted to start a new line. She liked the name of the Tehama Club, and wanted to name the line “Tehama,” so I went in with her. It’s been a good match.

For the rest of the article pick up a copy of the 2006 Northern California Golf Guide.