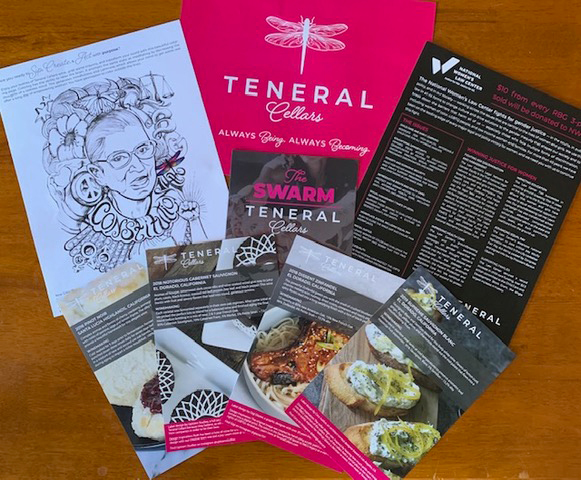 From early in her career, Jill Osur knew she felt most energized and grounded when supporting her community and contributing to the greater good. In the aftermath of George Floyd’s death and Black Lives Matter protests in the summer of 2020, she wondered how she could bring positive change in such challenging times. The social unrest and the pressure of a global pandemic coalesced into a catalyzing internal force that demanded she find a way to align her values and actions. She decided to form a company with the aim of elevating and supporting women and the causes important to them. The result was a new kind of winery: Teneral Cellars—“a digital company producing incredible wine for a like-minded, mission-driven community that sips, creates and acts with purpose,” says its mission.

Based in the Sierra Foothill community of Fair Play, Teneral Cellars strives to break and bend norms in an industry that has long been boxed in by tradition. Osur, the CEO and founder, says she and her team pride themselves on being industry disruptors that influence progressive social change. How? By providing clear messaging, supporting women, embracing technology and building community.

Teneral takes action to bring women to the forefront. The wine industry has long been a male-dominated workspace. For example, in 2017 (according to Data USA), 43% of the enology and viticulture degrees at three major winemaking universities were awarded to women, but less than 15% held positions as head winemakers. Teneral Cellars helps close that gap by sourcing fruit from women farmers and utilizing the skill sets of women winemakers. Likewise, partners and vendors are carefully screened. The process favors women and their supporters across the entire supply chain.

Teneral Cellars utilizes advancements in technology and is 100% digital, which is an anomaly in an industry deeply steeped in tradition. Born partly out of necessity (due to the pandemic), the team at Teneral designed their customer experiences to be virtual which has been a hard pivot for many more conservatively developed brands. While there is no tasting room to visit, wines can be purchased via the website, which is built on Shopify. The entire shopping experience is contained on this platform, and the data collected is generated in real time and allows Teneral Cellars to adjust quickly when needed as they get a deeper understanding of specific customer needs, buying patterns and priorities. As added value to the customer, there are QR codes on the bottles that link right to the company website, and a vast number of opportunities for customers to taste and connect online to increase engagement with the brand. 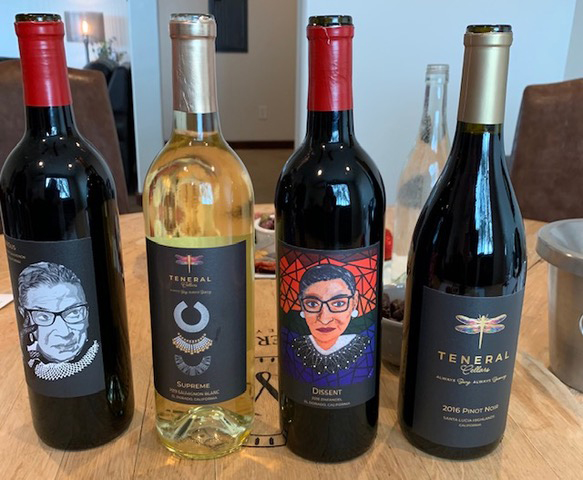 Teneral Cellars also focuses on building a community that supports and elevates its members. Their wines are best accessed through their digital wine club, The Swarm. The wines are well-made and stand on their own, but also serve as an instrument to bring like-minded individuals together in an online community. Swarm members have access to a full calendar of virtual events that include cooking classes, live music and panel discussions on a wide range of women’s topics.

Each quarterly release will be specifically themed and produced. The first Swarm release, which debuted in March for Women’s History Month, included wines that pay tribute to Supreme Court Justice, Ruth Bader Ginsburg, who passed away this past September. Included in this first collection are:

A portion ($10) of each purchased three-pack ($96) is being donated to the National Women’s Law Center which fights for gender justice by driving “change in the courts, in public policy, and in our society, especially for women of color, LGBTQ people, and low-income women and families.” The beneficiary will rotate each quarter to complement the theme. Teneral is committed to donating directly to organizations with priorities, like climate change, equality, and racial justice, that are important to today’s women.

Every element of the club shipment is carefully considered and developed. In the package, club members will find their wine selections, recipes, information about the charity that is the intended recipient of the donations and a letter explaining the significance of the current collection.

Each label’s original artwork is designed by a woman or someone supportive in the community.

The enclosed recipes are designed by Georgina Whalen (@georgina.whalen), the “food and lifestyle creator” behind the blog A Noted Life. Her recipes pair with the wines and are inspired by the theme. For example, Georgina offers a recipe of Char Siu Style Pork Chops Over Sesame Noodles to pair with the Teneral Dissent Zinfandel. Whalen’s inspiration for this recipe came from the fact that “RBG frequently took her daughter to the Kings Highway branch of the Brooklyn Public Library that sat above a Chinese restaurant. They would pour over books for hours and, as reported in The New York Times in the ’90s, RBG associated the scent of Chinese food with the pleasures of reading.”

Finally, Teneral Cellars has their own sommelier who is also the VP of Wine & Customer Experience, Vicki Tomiser. She contributes to their blog, Grit & Grace, and regularly pops up on their social media feeds offering wine tasting notes and education.

Ruth Bader Ginsburg once said, “Real change, enduring change, happens one step at a time.” Jill Osur and Teneral Cellars aim to be one of those steps on the long road to positive change.