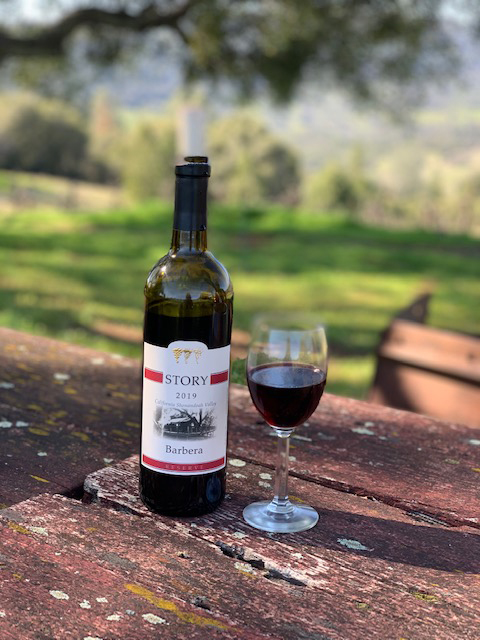 For over a year, my wanderlust has been frustrated and stifled. I’ve dreamed of vacations in far off lands, drinking regional wine, exploring unusual cuisines, nestling in at a neighborhood pub in an unfamiliar place, listening to music, chatting with locals and absorbing the vibe and local culture. Obviously, in 2020 and early in 2021, exotic holidays were the stuff of fantasies, so my husband and I have made do with quick, although infrequent, getaways.

This past weekend, we scheduled one such escape to Amador County for an event called “The Birth of Wine . . . Qvevri Wine Unveiling.” It sounded unusual (what’s a qvevri?) and intriguing so we sent in our RSVP and then made the journey out to Plymouth—to Story Winery—to check it out.

When we arrived, the winery was bustling. Not sure of where to go, we called my contact, Levan Beridze, the visiting Consul General of Georgia (the country) in San Francisco. He picked up the phone and said he’d meet us in the parking lot. Walking our way was a tall man with short dark hair, sunglasses, a well-fitting navy coat and a huge smile. Levan greeted us like we were old friends and assumed the role as our gracious and gregarious Georgian host and tour guide. 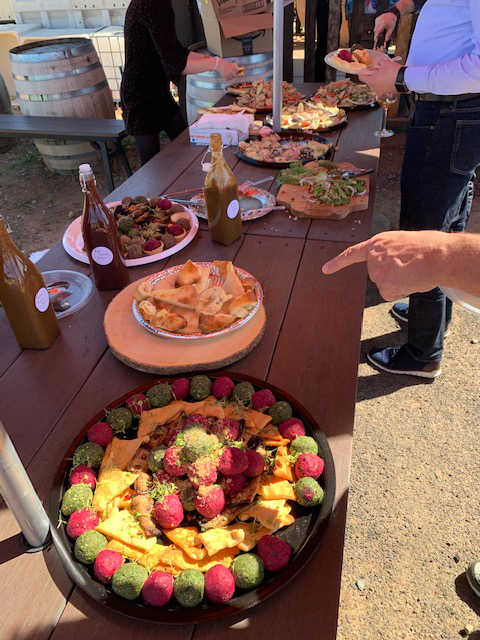 With repeated references to Georgia, you may wonder, where is this going? Let me establish some back story before I continue. Story Winery was purchased by Georgian businessman, David Dediashvili, in 2019. David committed to protecting Story’s traditions and history as one of the oldest wineries in Amador County. He retained the winemaker, Rob Campbell, who has continued to make the styles and types of new world wines for which the winery is known. However, David wanted to introduce something new by offering something old—by incorporating some of the Georgian winemaking traditions that had been handed down in his family and community for generations. Enter the qvevri.

A qvevri is a large clay egg-shaped vessel used in winemaking that is lined with beeswax, and it houses the grape juice until it has fermented. These containers have been used in Georgian winemaking for centuries. In fact, archaeological evidence found just south of the nation’s capital, Tbilisi, has shown that these pieces have been used to make grape wine in Georgia as far back as 8,000 years ago, making Georgia the birthplace of wine, a designation its people honor and celebrate. Wine runs through every aspect of their way of life. The country boasts more than 500 indigenous grapes, “roughly one sixth of the world’s total number of grape varieties” according to winesgeorgia.com. Approximately 50,000 acres are under vine (75% white, 25% red), and the number of family wineries applying for commercial licenses continues to climb. The most important grape varieties planted are Rkatsiteli (white) and Saperavi (red). (Interestingly, just behind China and other eastern European countries, the United States is the largest export market for Georgian wines.)

Returning to our celebration at Story, the focal point of the event was a ceremony to reveal what was inside the qvevri. The top was opened, and then a small red clay pitcher was used to retrieve the wine and pour tastes for guests. What we sampled was Carneros Chardonnay, that had been fermented underground on its skins since the 2020 harvest (approximately six months). The wine was gold in color and dry. Because of extended contact with skins, it even showed a hint of tannin and grip. I picked up notes of mineral, flint, ripe apples and citrus. For comparison, the winery also offered a sample of their new-world styled Carneros Chardonnay, which was markedly lighter in color and body. 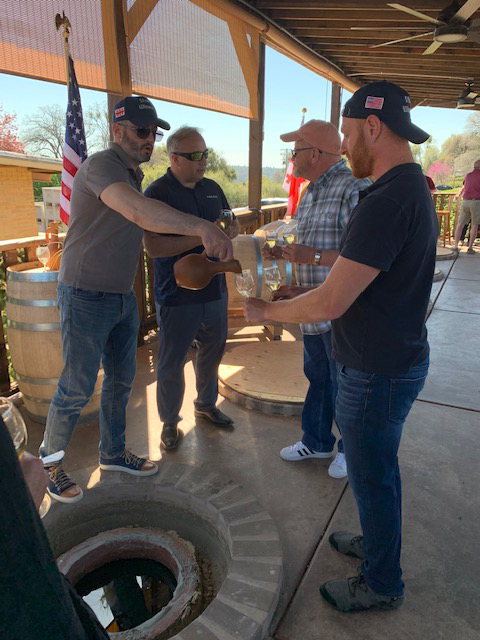 There are currently numerous qvevri scattered around the Story property, and six qvevri in the ground fostering and creating wine. The chardonnay we sampled will now be put into barrel, and then bottled for sale. Zinfandel and syrah are being made in the other buried qvevri, and will be opened at a later date.

Once we had a chance to taste the two chardonnays, we headed over to the edge of the ancient Mission grape vineyard (planted circa 1894) where long tables were covered in vibrant and inviting Georgian-inspired dishes. With plates in hand, eyes wide and mouths watering, we sampled everything. We tried pkhali—brightly colored balls made with a mix of beets, spinach, other vegetables and walnuts. There were delicate eggplant rolls dotted with pomegranate seeds, a salad made of cucumbers, tomatoes, cheese and herbs, and a candle-shaped dessert called churchkhela made of walnuts that had been strung together and dipped in thickened grape juice. We stuffed ourselves on imeruli khachapuri, round soft bread stuffed with ooey gooey delicious melted cheese. My husband and I had no preconceptions about Georgian food, but we decided almost instantly that we were enthusiastic fans and would actively seek it out in the future.

After we gorged ourselves, we decided to take our distended bellies out for a short walk down to the tasting room which sits amongst huge shady trees. There are picnic tables scattered around the grounds overlooking a majestic canyon that leads down to the Cosumnes River.

Seated at a table, we continued to take everything in as we slowly sipped on a bottle of Story Reserve Barbera and listened to the live traditional Georgian music playing in the distance. Soon, we were joined by a collection of memorable and affable Georgian characters.

Levan, our host, returned to the scene. He passionately told of tales of Georgian history and intermingled a quick language lesson. Bordered by Russia to the north, the Black Sea to the west, and Turkey, Armenia and Azerbaijan to the south and east, Georgia is at the crossroads where eastern Europe and western Asia intersect, and is situated at the end of what was once the Silk Road. Although Georgia is a very small country (geographically smaller than the state of Maine), it has had great historical significance and suffered through many battles, wars and occupations because of its location and resources. From advantour.com: “Historically, Georgia was a part of the Arab, Ottoman, Persian and Russian empires, which explains why the Georgian language has many loan words from Turkish, Persian, Arabic and Russian. The standard greeting in Georgian, “Gamarjoba!”, has a close connection with the word gamarjveba, meaning “victory,” and reflects the country’s complicated past of seemingly endless battles and attacks.“ (The Georgian culinary culture is equally influenced by the various factors listed above.) 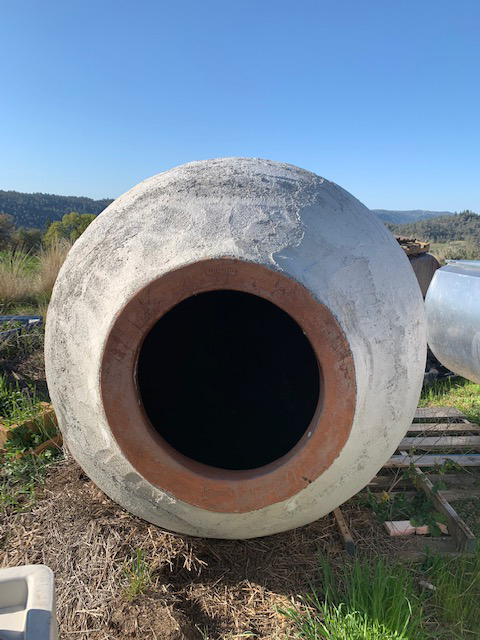 Our imaginations were further captured by the described beauty of the landscape. Georgia is a land decorated by vineyards, and covered in mountains, with over one-third of the geography being contained therein. Along the northern edge is the Greater Caucasus Mountain Range, to the south the Lesser Caucasus Mountains. Those two ranges are intersected by yet a third set of mountains called the Likhi Range.

Whether one seeks outdoor adventures, historical and cultural tours, culinary and wine excursions, or seaside resorts, it seems there is a reason to visit. Tourism in Georgia is on the rise.  With a population of just 3.7 million people, Georgia hosted more than 9 million visitors in 2019. That number is expected to grow to 11 million by 2025.

The more we learned, the more we wanted to know. To that end, we were next joined by Victor Eristavi, an effusive and friendly Georgian winemaker and storyteller who lives and makes wine at Eristavi Winery in the Bay Area. He took us on a verbal tour around the country of Georgia, introducing us through story to the foods and wines of his homeland. (We also discovered that we can enjoy those Georgian delicacies here in Northern California at Bevri Restaurant in Palo Alto.)

Finally, we had the pleasure of chatting with George Bakuradze, the Georgian winemaker who is consulting with Story’s winemaker (Rob Campbell) to incorporate some of the traditional winemaking techniques into the program at Story. Soft spoken, but clearly passionate and proud of his heritage, Bakuradze entertained us with stories about the trials and tribulations of qvevri winemaking as we all shared a bottle of wine into the early evening.

At the end of the day, as we headed to our car, my husband and I grinned from ear to ear. Our already beautiful day had turned into something unexpectedly magical that transported us to a land far away. Through food, wine and engaging conversations with kind and welcoming strangers, we left Story Winery feeling we had traveled. We left, with gratitude in our hearts, knowing we had new friendships and a little bigger, broader and brighter view of this amazing world. It was truly a great day!

In closing, a quote from Story Winery’s event invitation: “The legend goes, when God was dividing up the land on Earth for each nation, the Georgian people were too busy celebrating and drinking vast quantities of delicious wines (as per usual) and when they arrived to the God’s allotment of land event (late, with a hangover of course) there was none left for them. When a Georgian let it be known that they were busy making toasts in God’s name, God smiled warmly and gave them a small but extremely beautiful and fertile piece of land in the foothills of the Caucasus Mountains he was saving just for himself.”