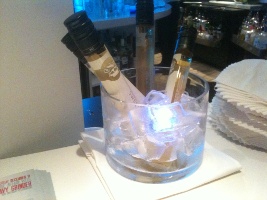 Last Friday, Lounge on 20 was one of the first bars in the country to begin carrying a chic new product: wine in a test-tubelike container. Château Saint-Marc, a winery in Bordeaux, France, packages two of its Sauternes—a nonvintage wine called Sweet Saint-Marc and the 2005 vintage—in tubes that hold 100ml (about 3 ounces) of fluid. It’s a gimmick designed to make Sauternes more accessible to American consumers who are more interested in Chardonnay and Sauvignon Blanc than in a pricey French dessert wine that retails for up to $180 a bottle. Lounge on 20 charges $14 for a tube of the nonvintage, $21 for the 2005 vintage. On Friday, the restaurant’s general manager Frank Carney placed ice buckets filled with tubes on the bar—and sold 12 in one night. “Ladies love it,” says Steve Swinford of Winery Direct Distributors, which reps the wine in this country. “It looks like a perfume bottle.”