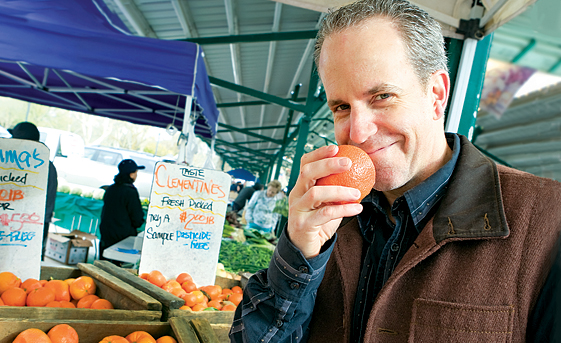 Chef Michael Tuohy recently moved here from Atlanta to run Grange Restaurant in The Citizen Hotel in downtown Sacramento. But he didn’t waste any time discovering the Sunday farmers market under the Capital City Freeway at Eighth and W streets. “It’s my absolute favorite,” he says.

At Grange, Tuohy works mostly with organic products that are locally grown or raised. He likes to do the same when he cooks at home. At the farmers market, he buys pork blade roasts and shoulder blade chops from John Bledsoe, handcrafted farmstead goat cheese from North Valley Farms and locally made Lienert’s honey.

Shopping philosophy: Buy whatever looks good at the farmers market.

Caterer and cooking instructor Terese Hollander Esperas does most of her grocery shopping at Sacramento Natural Foods Co-op. “I love their organic produce,” she says, noting that the co-op carries fruits and vegetables from local growers she knows, such as Riverdog, Full Belly and Terra Firma.

Hollander Esperas, who co-owns A Healthy Kitchen catering company with her husband, Dionisio Esperas, heads to the co-op for the heirloom produce and lesser-known varieties that she likes to cook with—everything from heirloom peaches to fava greens. She also loves the store’s selection of bulk spices. “It’s a treasure chest,” she notes. “I do a lot of ethnic cooking, and I love to buy just the amount of spices I need. If I need a pinch, I don’t have to buy a whole jar.” The retailer carries unusual spices, such as asofetida, used in Indian cooking.

Since giving birth to her first child two years ago, Hollander Esperas has acquired an even greater appreciation for the co-op’s selection of healthful foods. “I don’t have to read as many labels,” she notes. One of her daughter’s favorite treats: bits of Laura Chenel goat cheese, rolled into little balls.

Money-saving tip: Buy just the amount of spices you need from the bulk bins.

Cullen Newhoff, who runs the kitchen at Seasons Restaurant in Davis, doesn’t venture far afield for his personal foodstuffs: He shops at Davis Food Co-op, just a few blocks from the restaurant.

“They have the best selection of organic produce,” he says. “It’s just amazing.”
Newhoff shops like a European, going to the store almost every day. He raves about the store’s “great cheeses” and bulk foods and buys almost everything—beans, grains, granola, dried fruits, even dog food—at the co-op.

Money-saving tip: Buy from the bulk-foods department. “There’s no packaging, so it’s more efficient, and you can buy the amount you want,” says Newhoff. “Plus, you can see what you’re getting.”

It should come as no surprise that famed Italian restaurateur Biba Caggiano shops at Corti Brothers, the famed Italian grocery store.

“When I need a special ingredient, I go see my friend Darrell Corti,” says the chef/owner of Biba restaurant in midtown.

She pops into Corti Brothers for Italian specialties such as mostarda di Cremona (candied fruit in mustard-flavored syrup, used as a condiment) and mozzarella di bufala (mozzarella made from the milk of domestic water buffalo). She also likes Corti’s selection of imported Italian olive oils.

When she wants to splurge, she heads to Whole Foods Market on Arden Way. “Oh, my God!” Caggiano exclaims. “I just love the way they present the fruits and vegetables. I also like their cheeses and breads. I just walk around and spend money.”

Shopping philosophy: “When I find a good ingredient, I buy quite a bit. I’ll double or triple the recipe and put the excess in the freezer.”

He swears by Whole Foods’ produce, dairy and fish departments. “Their seafood is the best in town,” he declares. “It’s fresher than anybody else’s. I buy a lot of salmon and bass there.” He also likes Whole Foods’ selection of smoked fish.

At the meat counter, Haines purchases ground chicken and turkey. “They carry both light and dark meat, which I like to blend when I make a chicken or turkey patty,” he says. He frequents the store’s serve-yourself olive bar, but he tries to avoid the prepared-foods section. “When I hit the salad bar, I end up with a $20 salad,” he says. “There’s a reason people call it Whole Paycheck.”

Money-saving tip: Plan your shopping so that you can get two or three meals out of one dish. For instance, roast a chicken for dinner, then use the leftovers for sandwiches and the carcass for soup.

Scott Rose, the chef at Cosmo Cafe in downtown Sacramento, is a big fan of Trader Joe’s. “I live around the corner from a Raley’s, but I do most of my shopping at Trader Joe’s,” he says.

Money-saving tip: Buy chicken legs (Trader Joe’s has them at a good price) and use them for stir-fries and fried chicken.