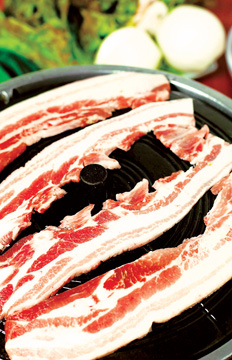 I always start my customers with pork chops, says John Bledsoe from behind his table at the far west end of the Sunday farmers market under the WX Freeway. They have a lot of flavor, and they’re not hard to cook.

It wouldn’t matter if Bledsoe started you with pork shoulder, sausage or Canadian bacon. Bledsoe Natural Pork doesn’t take much getting used to. The color, taste and texture of pork raised without antibiotics or growth hormones are nothing like that of pork from larger agricultural operations. Raw, a Bledsoe pork chop is pale and moist. Cooked, it’s sweet and tender, with nary a stringy mouthful.

Bledsoe and his son, Dan, raise 300 to 400 Duroc, Yorkshire and Hampshire pigs on their farm in Dunnigan, near Woodland. Dan, who has spina bifida, zooms around the farmers market and the Bledsoe spread in a wheelchair. When he was in high school, he raised show pigs for Future Farmers of America. We had more pigs than had homes, and that’s how we got started, the elder Bledsoe says.

Bledsoe used to raise pigs with stimulants to force them to bulk up faster. Four years ago, father and son switched to natural methods&emdash;neither antibiotics nor growth hormones&emdash;and Bledsoe is happier with his product. I like the flavor of the meat when it’s raised slower, he says. So do chefs. At Mulvaney’s Building & Loan, Patrick Mulvaney might stuff a 2-inch-thick Bledsoe pork chop with walnuts and thyme. At Lucca, chef Ian McBride relies on Bledsoe sausage to spice up ricotta gnocchi. Bledsoe’s own favorite cut is pork shoulder, popular in stir-fries and for making char siu pork. Our Chinese customers say it’s the closest to the way pork tastes in China, he says.

At the farmers market, Bledsoe charges $4 a pound for pork sirloin, shoulder and chops, $5 for four large sausage links or eight of his popular poppers: hot dogs made with no, ahem, spare parts, just pure pork and seasonings. Customers include Sacramento’s mayor, Heather Fargo. I’m one of his regulars, she says. A politician who pays for pork&emdash;imagine that.

Pork Chops in Merlot Marinade
The last drops in a bottle of Merlot inspired this impromptu recipe.

Place the pork chops in a single layer in a low-sided dish. Stir together remaining ingredients and pour over the chops. Marinate at room temperature 15 minutes but not longer than 30 minutes. Line a low-sided baking sheet with foil, set a rack on the foil and slide all under the broiler; preheat the rack about 3 minutes. With tongs, arrange chops on the hot rack, adding marinade as desired. Broil the pork chops 6 to 7 minutes per side. Place the chops on a serving platter and top with the juices. Serves 4.