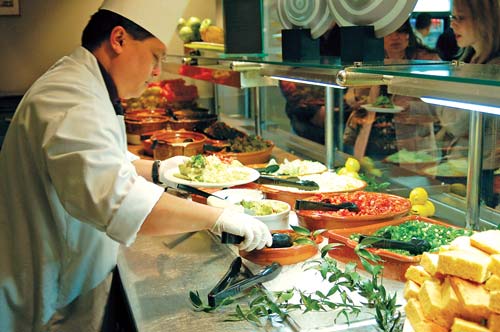 In a town full of state workers, we all know the drill: The benefits can’t be beat.

But there are other advantages to state-worker life&emdash;including, as it turns out, some of the hippest cafeterias in town.

The Dollar-Wise Gourmet is not a government employee and would not normally be found roaming around state office buildings. I’ve always been a stubbornly independent sort, which is why I’m sitting at home in my leopard-print bathrobe writing this story instead of chalking up my 25th year with the California Highway Patrol.

But I digress. The point is, you don’t have to work for the state to eat in its cafeterias&emdash;some of which offer surprisingly tasty food at bargain prices. That the settings are decidedly uncafeterialike was the unexpected cherry on top.

Reputed to be the best of its kind is the cafeteria at PERS, which, in case you don’t know statespeak, stands for Public Employees’ Retirement System. Located on the first floor of PERS headquarters in the Lincoln Plaza Complex at 400 Q St.&emdash;which my lunch-mate Janet compared to the hanging gardens of Babylon&emdash;the cafeteria offers a mind-blowing array of gourmet fare, in addition to cheeseburgers and other basic grub. We swooned over the deli bar (37 cents an ounce), where Janet assembled a colorful sandwich featuring pesto, grilled vegetables, and provolone and Swiss cheeses. Equally dazzling was the salad bar (35 cents an ounce), with its spectacular smorgasbord of selections. (Brussels sprouts and roasted potatoes at a salad bar?) In addition to my plate of leafy greens, I stopped at the soup station for a small bowl of jambalaya ($1.10) and a slice of artichoke-embedded focaccia (60 cents), fabulously fresh and made on the premises.
Our total: $11.57, including two beverages.

For sheer culinary diversity, PERS can’t be beat. But while the selections were narrower, the food at the Capitol cafeteria (in the basement) was excellent, and the grandeur of the setting added to its allure. Though daily chef specials range from hot pastrami sandwiches to crispy chicken salad&emdash;all from $7.75 to $7.95, including three sides&emdash;the focus here is Tex-Mex. My friend Debbie and I tried the Tex-Mex specials ($5.95): chile colorado for me, chicken enchiladas for her, each accompanied by Mexican rice, refried beans and tortilla chips&emdash;very filling! Debbie was impressed that her enchiladas weren’t drowning in sauce and cheese and said they were better than what she’s found at many local restaurants. And we felt like we were in a restaurant, too, with the room’s lovely booths, handsome brick walls and eye-catching collection of artwork. Our total: $16.42, including beverages.

Several state-worker friends suggested the cafeteria at the Department of General Services (707 Third St., West Sac), in the building popularly known as the Ziggurat, so my pal Peggy and I paid a visit.

Unfortunately, we were more wowed by the comfy booths and the serene, river-view setting than the food, though her taco salad ($5.49), featuring nicely flavored shredded chicken and piled high in a tortilla bowl, wasn’t half bad.

Sure, there are other state cafeterias to explore. But as a woman who knows her priorities, I’m going to stay right here in my robe and slippers and let the rest of you do the work.