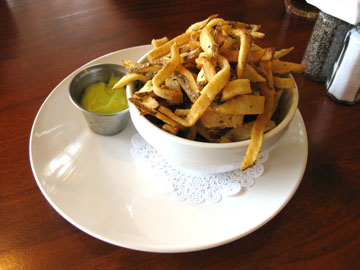 I had lunch at OneSpeed yesterday with friends just back from a five-week trip to France, Luxembourg and Belgium. While there, they visited the French Fry Museum in Bruges. (It’s actually called Het Frietmuseum.) At the museum they learned that the French fry was invented in the 17th century by the Belgians, who used to eat small fried fish with their meals. In the winter, when the river froze over and they couldn’t fish, they cut potatoes lengthwise to look like little fish and fried them.

In honor of that story, we ordered a bowl of Rick Mahan’s delicious herbed French fries with aioli. Very French … um, I mean Belgian.