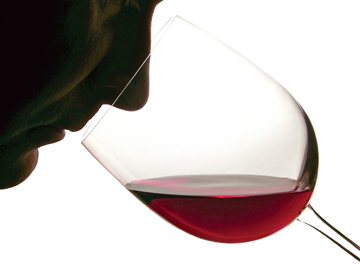 Ever wonder how some people can pinpoint an elusive flavor in a stew, or find differences between two wines that taste virtually the same to you? Chances are, these sensitive types are supertasters, born to have a stronger experience of what’s in their mouths. In the wine world, I have colleagues whose abilities are uncanny. I’m just glad they use their powers for good, even if they can be darn picky when it comes to where to go for lunch.

I prefer to call them â€˜hypertasters,’ says UC Davis professor Hildegarde Heymann, whose cutting-edge research on food and wine influences sommeliers from New York to New Dehli. Calling them â€˜super’ gives it emotional content. They genetically taste more than normal, and their life is more complicated that way, she says. Sensory scientists like Heymann can measure the sensitivity and density of taste buds on a tongue to determine whether its owner is a nontaster, normal taster or hypertaster.

You might think that having more taste buds might make someone more likely to be in the taste business, working (as I do) as a wine judge or in quality control for the Valrhona chocolate company (my dream job). Yes and no. Super status has to do only with intensity of sensation on the tongue. Someone with super hearing isn’t necessarily a good music critic, right? Success depends on years of training, for starters.

A venture capitalist who sniffs out a winning startup may have been born with analytic aptitude, but he’d be nowhere without the experience and above-average motivation to snag his quarry. Same with catching that hint of mint that identifies a certain single-vineyard Cabernet: Anyone paying that much attention not only has the tools but knows how to use them.

Culture, too, can trump genetics when it comes to taste. A supertaster from Mexico overcomes her aversion to the hot peppers in her mom’s cooking, even though they initially burn something awful. Nontasters who enter the coffee business through inheritance can pick out their family’s blend in a blind lineup.

I strongly believe that wine tasters are created, not born, says Heymann, who has trained hundreds of tasting panels in the course of her research.

How can you train yourself to be a supertaster, regardless of bud count? Practice. Join a club. Take a class. Let those corks fly!

And don’t do it just with wine. In fact, it may be easier to start with foods. Suck on a kumquat. Lick some sea salt. Put your nose above a bowl of soup and see if you can guess the ingredients with your eyes closed. Make your brain play along by saying flavors out loud to yourself or to an understanding friend. Explain you are in training to your mystified co-workers as you scribble down notes with lunch.

I really do think it’s about paying attention, says Heymann.

Are you a supertaster?&emdash;Experts figure that about 35 percent of women are supertasters, compared to about 15 percent of men. That fits in with anecdotal evidence I hear in the wine industry. Some male winemakers tell me they bring their wives in when it’s time for final blend decisions.  â€¢  Here’s how to test yourself: Lick some blue food coloring and use a magnifying glass to see how many pink taste buds you can count within a 7mm circle. A normal taster will have between 15 and 35. Less sensitive nontasters have fewer than 15, and supertasters have more than 35.  â€¢  Don’t forget the importance of smell: The receptors in the nose and olfactory passages can sense more than 10,000 different scents. Taste buds, on the other hand, register only five flavors: sour, bitter, sweet, salty and umami, a Japanese term for the savory earthiness found in mushrooms and aged cheeses.  â€¢  Tests for the sense of smell are even more fun, if you can get your doctor to get you one. The most commonly used is the University of Pennsylvania Smell Identification Test, a game of scratch and sniff. Another test, aptly named Sniffin’ Sticks, is just like snorting Mr. Sketchy
scented markers in second grade. There are also tests that measure how well taste and smell work together, such as the flavor discrimination test.

Use it or lose it&emdash;We teach children about colors and shapes, but not tastes and smells. I think we lose out by not doing that, says Dr. Hildegarde Heymann. Her mentor in sensory science at UC Davis, Ann Noble, once gave her directions to a bush of ripe blackberries on campus by mapping only a trail of smells (parking garage, trash cans, chicken coop, etc.).

Elaine’s Pick of the Month

Ah, romance is in the air in February, and there’s no substitute for ros Champagne. I’m smitten with De Meric Grande Sous Bois Bouzy Ros Brut Champagne. With only 300 cases made, and only 23 exported to the United States, it’s as rare a find as
true love. ($35, klwines.com)

>>  What rock band recorded a catchy song about being a supertaster?

E-mail your answer to wine@sacmag.com by Feb. 15. The winner will receive an insulated wine tote. Make sure to include your name, address and telephone number. The winner will be selected by random drawing from all the correct responses.

We’ve got a winner! In December, we asked: What’s a flying winemaker? The correct answer: a winemaker who works two harvests a year, flying from one hemisphere to another. (For example, Paul Hobbs crushes in October in Napa under his eponymous brand, and in April gets his hands purple in Mendoza, Argentina, for ViÃ±a Cobos and other labels.) The winner, Margot Rice of Rancho Murieta, received a Rösle wine decanting funnel.