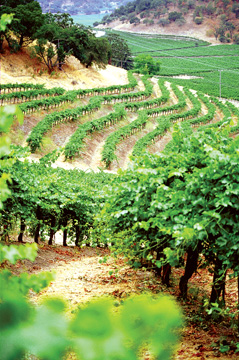 Elaine, you’ve got to show this guy the real deal in Napa, wrote my friend Peg Tomlinson-Poswall, on vacation in Milan. As befitting one of Sacramento magazine’s Dining Divas, she had bonded with top sommelier Federico Graziani at the celebrated Milanese restaurant Aimo e Nadia. He was planning a food and wine tour of the United States, she said. Which got me to thinking: Where, exactly, might the real deal in Napa be found?

On his own, Federico was free to witness the tour-bus hospitality that the corporate wineries have perfected. But with me, he would see two privately held wineries that I felt were especially evocative of the Napa Valley.

On the day of our excursion, we hopped in Peg’s Prius and enjoyed plenty of food and wine gossip on the way to Napa. Our first stop was Cliff Lede Vineyards in the Stag’s Leap district. I told Federico that it is difficult in some parts of Napa to get zoning-board approval for a new winery and tasting room. Canadian businessman Cliff Lede solved this by purchasing S. Anderson, a beloved maker of sparkling wines. Lede regrafted S. Anderson’s Pinot Noir and Chardonnay vines to Cabernet Sauvignon.

Lede isn’t alone in having invested more on a Napa winery than the GNP of a few small nations, but he’s done it with gusto and good taste. Lede’s winemaker is Michelle Edwards, formerly of cult winery Colgin, and the vineyard manager is David Abreu, famous for his work with Colgin, Harlan and Screaming Eagle. Michel Rolland, the globe-trotting consultant from Bordeaux, is on the books as well.

Lede’s buildings, which were built upon the footprint of the S. Anderson winery, are refreshingly modern and almost modest when compared to the Victorian and Gothic mansions in the neighborhood. The tasting room is a respectfully remodeled 1913 Craftsman bungalow.

The winery building is a luxury playpen with state-of-the-art design. Federico and I turned green with both envy and vertigo on the steel catwalk that slinks above shiny tapered tanks. At harvest, the grapes are hand-sorted, berry by berry, then gently lifted by crane to the tanks rather than pumped. The egg-shaped cement fermenter is an experiment, from a French company that originally made mausoleums. And the reds are treated to a 25,000-square-foot aging cave.

Sufficiently impressed by all this whiz-bang, we sat down to taste the wines. The 2003 Poetry Vineyard Stag’s Leap was a prime example of Napa Cabernet and very much what we expected: rich texture, tannins tamed, upfront, ripe fruit flavors with the corresponding heat of high alcohol, and prominent use of oak. Same, too, for the 2003 Claret, which was a nicely balanced blend of red Bordeaux varieties.

We compared notes as we left the parking lot. Federico and I found that, despite the power of the reds, we both favored the Cliff Lede 2005 Sauvignon Blanc, a seamless, sophisticated white. At $20, it seemed a screaming deal when compared with the $120 tag on the Poetry Cabernet.

Now I want to show you something a little different, I said, getting out my map. We zoomed up Highway 29, exiting just before Calistoga to enter the Diamond Mountain district. The winding road gained elevation quickly and the Valley oaks gave way to redwoods, pines and lush ferns. We missed the blue mailbox the first time but finally made our way up a steep, narrow driveway to the home, vineyard and business office of Dyer Vineyard.

We were greeted by winemaker Dawnine Dyer, who led us into the rammed-earth home she and her husband built into the hill. It was as cool and peaceful as a monastery.

Dyer directed winemaking at Domaine Chandon for 25 years, pioneering sparkling wines in California. Her husband, Bill, had a long career as winemaker for Sterling Vineyards, and now consults in Napa and abroad. Dyer Vineyard, or Dyer Straits, as they call their tiny company, is their personal project, one that is now coming into bloom.

Their share of the mountain is 12 acres, and the vineyard is just 2 1/2 acres, planted mostly with Cabernet Sauvignon and a smidgen of Petit Verdot and Cabernet Franc. The vines themselves are manicured, micromanaged, said Dyer, for sun exposure and ripeness. But the surrounding forest looked as if it could take over any minute in a brushy brawl.

Dyer told us she makes the wines at neighboring Von Strasser Winery. There was no talk of crush-pad heroics. The enormous rock pile at one end of the vineyard spoke volumes, though. The right to plant vines in the volcanic soil was evidently earned boulder by boulder.

We sat at a wooden table next to the open kitchen and tried not to drip wine on Dyer’s woven place mats as she let us pour for ourselves the one wine, only 400 cases of it, that comes from this vineyard. We smelled the 2002 vintage before we even brought the glasses to our lips. The aromas went beyond gushing black cherries and cassis. There was sandalwood. And plum skin. Violets. Cedar. Federico was silent, nose suspended in glass, eyes closed, lips curled in a smile.

In my mouth, the wine had lots of black fruit flavors and an elegant balance of acidity. At four years old, the wine was still tightly wound, with a fine tannin structure that felt polished. The finish was long, with the flavor of tart currants. I let it play out across my tongue and looked around. The Dyers had moved us as surely as they had those boulders.

Wine Trivia Contest
While El Dorado winemaking and grape growing date back to the mid-1800s, when was the region officially identified as an American Viticultural Area?
a. 1963    b. 1973    c. 1983

E-mail your answer to wine@sacmag.com by March 15. The winner will receive two passes to El Dorado Wine Country Passport Weekend on Sunday, April 1, worth $130. Make sure to include your name, address and telephone number. The winner will be selected by random drawing from all the correct responses.
We’ve got a winner! In January, we asked: What whimsical second label, featuring a large bird on the bottle, was so successful after only three years on the market that the winery sold the brand for millions of dollars about a year ago? The correct answer: HRM Rex Goliath Giant 47-Pound Rooster. The winner, Hal Franscioni of Carmichael, received an insulated wine tote.