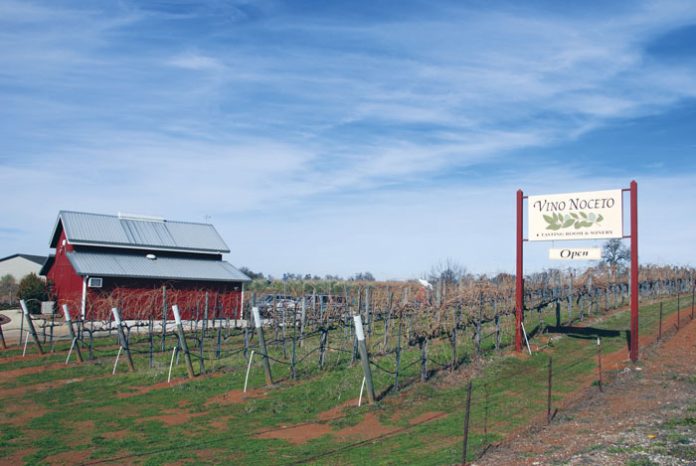 Like a shark that suffocates if it stops moving, I depend on the wine world to keep ideas and experiences running past my gills. Recently, new insight ran up and wrapped me in an emphatic squeeze. “Vintage in California matters,” it murmured joyfully. “And not in the way you think.”

Vintage—the year the grapes in a wine were grown—is a colorful postcard of just one season. The taste paints a landscape, perhaps of a green spring ruined by hail or of a ripe, dry summer. “Dear aroma and acid balance, wish you were here. Flavor and alcohol levels are fat and happy in the sun,” it says, readable even years later.

In France, the spiritual home of our wine traditions, grapevines live just on the edge of optimal conditions. Like the girl with the curl, good weather makes for very good wine, but when it is bad, the wine can be horrid. That’s why you see vintage charts for growing regions around the world: to keep track of the better years (and to justify the higher prices you’ll find).

In general, we Californians don’t worry about vintage much. Our climate isn’t extreme: We don’t have plagues of summer locusts (Australia) or killer ice storms (New York). Irrigation protects against drought, and in the winery, technology and equipment ensure we get the most out of whatever the harvest brings.

In addition, California enjoys a heal-thy bulk-wine market and lax labeling laws. If winemakers need to add in a little juice from a warmer or cooler region to balance out their wine, they can. They can even add in up to 15 percent from another year. For most California wines, vintage is the last thing you’ll think about when making your choice.

So how, and what, did I learn about why vintage matters? Let me explain. A typical evening with my geeky wine friends, The Capitol Cork Dorks, began with almost no introduction from our fearless leader, Michael Chandler. We were flying blind, tasting 12 wines from his cellar that we knew nothing about. It was our job to guess, if not the wines themselves, at least the theme that bound them. Cut to the chase: We failed miserably. The wines were red, that much we were sure. I thought they were Cabernet or Cab blends, with a bit of age, given the aroma profile, but from where? I associate California Cab with high alcohol levels and a certain sweet fruitiness, which these wines were missing.

“These are like Napa,” I said to my dorks-in-arms, “only I like them.” The cloaked wines were a bit more subtle, more balanced than the blue-chip reds that usually overwhelm me with their full-blown ripeness and heavy use of expensive oak barrels. We guessed various New World appellations with cooler climates: New Zealand’s Central Otago, Argentina’s upper Mendoza? Being true Californians, vintage didn’t figure in our guessing, despite the obvious clue: tastes like Napa but lacks the jammy ripeness.

“A cool spring” is how wineries diplomatically describe 1998. I remember it well. In the coldest June since 1949, I was shivering in my wedding dress while the grapes were hard and green, struggling to reach veraision. Two months later, I traipsed after my new hubby, who was surveying vineyard land on the Sonoma coast. That foggy August, I saw vintners dropping crop in an effort to minimize rot and mold. And in a wet October, with clients in the Sierra foothills, I saw the stress on their faces as they managed the ugliest harvest in memory.

But like a bad day of fishing, a rough year in California ain’t the disaster the pundits lead you to believe. Many wineries managed the crop well and made stellar wines. Famous critic Robert Parker even said he liked the 1998 Staglin Family Vineyard Cabernet better than the sunshine-and-flowers year of 1997. Yet if you compare prices of California wines on Internet auction sites such as WineBid.com, the 1998s run about half the price of bottles from “vintages of the decade” such as 1994 or 1997.

The blind tasting taught me to appreciate the vintage for what it was. I resolved to snatch up 1998s at bargain prices and raise the caliber of simple meals at home. Others in the group had the same idea, and it was a race to the auction sites. But we were the only ones there.

So don’t obsess over whether a vintage is postcard-perfect. Well-traveled wine lovers simply appreciate the variations, and the conditions that lead to them.

By the way, I hear 2008 was a real doozy in California. A brittle frost, followed by heat and drought, wildfires seemingly everywhere and a race to harvest under the threat of rain. The one result everyone agrees on is that the crop was small.

I can’t wait to taste it.

Don’t take the vintage charts as gospel or you’ll miss some great deals. I pounce on wines that follow a hyped vintage—if I like them. Good years come in twos and threes, even in Europe, but it’s too hard to market them all as “the vintage of the decade.” So the year after a great vintage often costs less.

Vive la différence
The other night, I opened bottles from the same winery, same vineyard, same grape, but different vintage: one from 1999, blessed with an Indian summer, and one from the “dismal” 1998, with twice the normal rainfall. I found both wines delicious but quite different. Here are my notes:

1998 Vino Noceto Sangiovese Amador County, Shenandoah Valley—Color is typical light garnet with rim thinning to brick. Looks and smells fresh. Aromas of plum, plus tart small fruits like cherry, cranberry, pomegranate. Syrup underneath it all, and just a bit of mature complexity. Smell some oak aging, as vanilla, woodsy odor. On palate, sweet, bright fruit, plummy. Texture has become smooth and silky. What a surprise it aged this well.