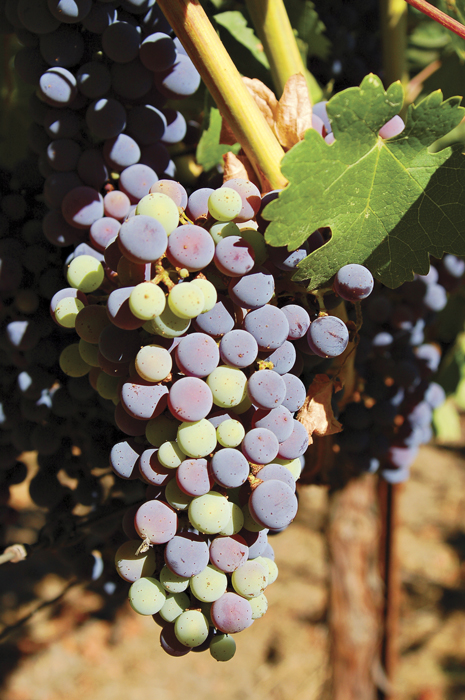 There’s no substitute for visiting a vineyard. For one thing, wine grapes tend to be planted in the most beautiful areas on earth (complete with good restaurants). But what do you see when you look at a vineyard? And what can you tell about the wine that’s made there? Here’s a brief guide to what you’ll see when you visit a vineyard, and a few words on why it matters.

Vines
The first thing you’ll probably wonder is “What kind of grapes are those?” And then you’ll probably see a cute winery sign that tells you. No sign? Then you’ll have to memorize leaf shapes. (Grape leaves are distinct according to variety.) If the vines are dormant, and thus bald of leaves, your task becomes much, much harder. But lucky you if there’s fruit on the vine. How’s it hanging? Merlot, for example, has long, lanky bunches. Members of the Pinot family, such as Pinot Noir and Pinot Gris, grow tight fists of grape clusters.

Clones
If you ever fantasized about being a detective, you’ll enjoy looking for clues as to the type of clone you’re seeing. Clones are genetic variations within each varietal type. Since wine grapes are reproduced through cuttings, not seeds, each clone has the same genes as its source. For winemakers, choosing the right clone for a particular site is almost as important as choosing the right grape varietal. Can you tell a clone by looking at the vine? I doubt it. But you may see clues at the end of the row. Often clones are identified by their source, so a row marker might say, “Syrah, Tablas Creek clone” or simply “Syrah/TC.” Last year, while vacationing on the other side of the world, I noticed a row marker of New Zealand Sauvignon Blanc marked with the letters “UCD.” Yes, the clone was from UC Davis!

Trellis System
What can you tell from a vineyard’s trellis system? A straight, vertical trellis can accommodate mechanical harvesting. Grapes grown on a quadrilateral cordon, with four anchoring canes tied to cross wires, are likely to be hand harvested. And if there’s no trellis at all? You’re looking at head-trained vines, typical of old Zinfandel vineyards, which are pruned and harvested by hand. Bonus: Count the number of shoots in the trellis and you’ll get a clue to crop size. A vintner prunes to 10 or 20 canes for a low yield. A quantity-driven vineyard may grow 40 or more shoots per vine, with two or three clusters each.

Eyes on the Floor
Is the ground under the vines bare, like the surface of the moon? That means herbicides have been sprayed there to keep weeds from stealing moisture or nutrients from the vines. Are there cover crops planted between rows to hold the soil in place? Clovers, vetch and grasses between the vines not only prevent erosion but provide homes for beneficial insects and nitrogen for the soil. When the vegetation is mowed, the clippings are left in place as a cushy mulch.

Irrigation
A vineyard can be watered in one of many ways: using drip lines,sprinklers, flooding furrows or nothing but the rain—the easiest and least expensive option. Those who can afford irrigation love the Godlike control it gives them. Zero irrigation is called “dry farming,” and its proponents aren’t just cheap: They think the grapes get more concentrated. Progressive growers are changing their irrigation methods in light of water shortages; dry-farmed layouts are on the rise. Think it’s a challenge to program your home sprinklers? Try managing steep vineyard hills. You have to allow for the runoff to the vines at the bottom.

The Big Picture
Are you in the flatlands, or would you get a nosebleed if you climbed to the vineyard’s highest point? Hills and valleys create microclimates. We don’t worry about ripening in sunny California, but in Oregon or Europe, you’ll notice the better vineyards are planted on a southeastern-facing slope. Like budding starlets, the vines want as much early exposure as possible to the bright lights. Sunlight in the morning equals a longer day of photosynthesis, and that equals more ripe, juicy flavor.

Elaine’s Picks of the Month
Txakolina (chock-oh-leen-ah) is a cool, crisp white wine with a spritzy natural carbonation. Fans wax poetic with descriptors: honeysuckle, lemon zest, sea air, raw quince, minerals and more. In Spain, an ocean of Txakolina chases down tapas, especially shellfish and tender pulpo. This low-alcohol wine is based upon the indigenous grape Hondarribi Zurri, fermented in steel tanks rather than oak, with the addition of Folle Blanche, Sauvignon Blanc and other local varietals, depending upon the producer. Expect to spend $20 or less. Try Ameztoi Txakolina 2008 or Gurrutxaga Txakolina Bizkaiko Rosado 2008 (both available at The Market at Pavilions and 58 Degrees & Holding Co.).