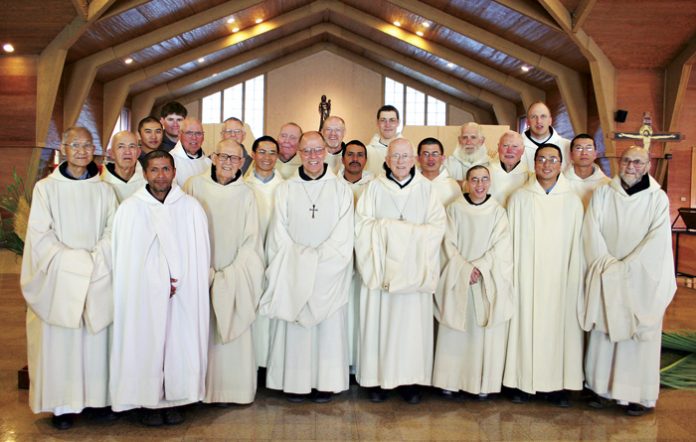 Drawn by the image of silent men in robes, I drove past undulating ribbons of fruit orchards to a Trappist-Cistercian monastery just north of Chico. There, the monks of the Abbey of New Clairvaux make wine in a unique joint venture with one of California’s oldest winemaking families.
The order’s winemaking bona fides go way back, to 13th-century France. The Trappist-Cistercians are credited with shaping our understanding of terroir, the geography of vineyard sites.
Close to 40 years ago, the California monks met Phil Sunseri, a member of the winemaking Nichelini family of Napa. Sunseri and his siblings still own prime vineyards in Napa, and Nichelini Winery is said to be the oldest operating winery there. His cousins are the Boegers of El Dorado.
Sunseri formed an unusual alliance with the abbey to plant vineyard land and start a winery called New Clairvaux Vineyard. (Since the order isn’t permitted to have financial partners, the monks own one vineyard, called St. James, while Sunseri owns another, called Poor Souls.)
Meanwhile, Phil’s daughter, Aimée Sunseri, was following her own calling, studying enology at UC Davis. In 2003, diploma in hand, she went straight to New Clairvaux, overseeing the first crush from the vines planted by her dad and the monks.
This petite blond winemaker quickly mastered the steep learning curve of winery management. In addition, she expanded the winery’s plantings from mainstream Cabernet Sauvignon and Chardonnay to include a litany of varietals: Barbera, Tempranillo, Trebbiano, Albariño. “It’s safe to say we’ll always be exploring what works, both in the vineyard and the market,” she says.
During my visit, as Aimée Sunseri and I discussed the challenges of marketing and distribution, Father Harold stopped in to talk with her about a vineyard issue. He wasn’t dressed in the solemn robes I was hoping for. Instead, the 70-something monk was spry and fit in a pair of baby-blue coveralls. I wondered what it’s like for a young woman to work not only with her father, but with all those fathers and brothers. And as a first-time winemaker? I’m in awe. She’s got the faith of all these monks put together, not to mention the cojones of her great-great-grandfather, Anton Nichelini.

A Little History Lesson
The Vina ranch that is home to the Abbey of New Clairvaux was developed in the 1880s by Leland Stanford, the railroad baron who later became governor of California.
Stanford first fell in love with the property while traveling the railroad lines that made his fortune. Stanford, who was a vintner in the Palo Alto area, bought the ranch and concentrated his operations at the new place. The town of Vina grew there, named after the vines that produced 100,000 gallons of wine and brandy a year. Stanford’s brick winery building, where New Clairvaux still makes wine, was known back then as “the largest wine cellar in the world.” It covered 2 acres and could hold 2 million gallons of wine.
Stanford’s dreams of passing down the wine business to his son were shattered by the boy’s death of typhoid on a trip to Italy. Later, the thriving winery helped bankroll the founding and operation of Stanford University, named in memory of the boy.

Elaine’s Picks of the Month