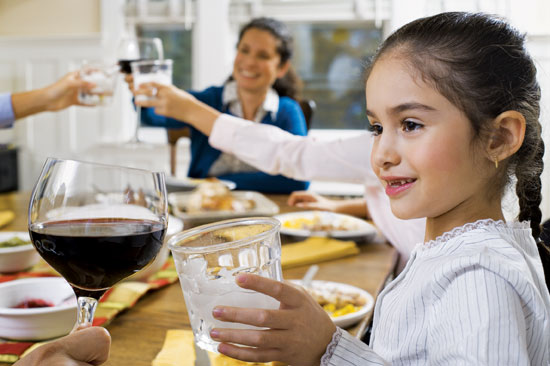 Ten years of consulting, teaching, writing and judging&emdash;you could say my life has revolved around wine. I’ve enjoyed the growing popularity of wine in America, the critical mass celebrating its sensual satisfaction, agrarian roots and cultural history. Wine is food, the enlightened industry has proclaimed. Wine is health, announced Morley Safer on 60 Minutes in 1991, and scores of medical studies to support the claim have followed. Wine’s role in my own healthful lifestyle went unquestioned&emdash;until I had children.

I knew I wanted my kids to grow up with a strong sense of personal taste, the sensory pleasure and discernment that I enjoy so much in my work and play. But when my 2-year-old swirled and sniffed her sippy cup at the dinner table, I freaked. What kind of role model am I, who receives wine reps and their samples at home, who sits her toddler down with the See ‘n Say while I inventory hundreds of bottles in the basement? How do my kids perceive the 20 open bottles on the bar when we have a dinner party for 10?

Friends from work and school were no help. One winemaker massaged his baby’s gums with wine to develop his palate early. A winery owner supplied her teens with leftover bottles, asserting, It’s safer to have them drink at home rather than in a field somewhere. Moms of kids in my 10-year-old son’s class allowed them sips of beer at a picnic, saying, If they grow up with it, they won’t go crazy over it when they turn 21. Myths abounded, and no one seemed overly concerned that this thing we prize as adults could also pose a danger to our children.

The literature on the health benefits of wine isn’t just industry cheerleading. This past year alone brought good news published in The American Journal of Gastroenterology, Nature, Annals of Internal Medicine and Journals of Gerontology, among others. Wine drinkers live longer. Their hearts beat stronger. Diabetes, strokes, colon cancer, even the incidence of cataracts lessens among those who imbibe. Adults who imbibe, that is.

The key to the bennies: moderation, which the American Heart Association defines as one to two glasses a day. But can kids grasp the value of moderation, when their natural impulses are more, now and mine? And what about the real dangers of alcohol abuse? Are my kids headed toward resistance to cancer or risk of addiction? Improved vascular function or shattered marriages? Joyful connoisseurship or multiple DUI convictions?

Benefit and excess have bedeviled each other for ages; it even says so in the Talmud and the Bible. But I decided to explore more recent sources to separate myth from fact: the latest research. What I found often surprised me&emdash;and has changed the way I handle wine, beer and spirits at home.

Myth: A glass of wine during pregnancy can’t hurt.
The research: Regardless of whether you enjoy wine, beer or spirits, the alcohol in these drinks poses equal risk to the developing fetus. In the first trimester, birth defects are the worry: cleft palate, mental retardation, kidney defects and the facial features of fetal alcohol syndrome. The second trimester is all about the growth of essential organs. Alcohol can slow or damage their maturation. And in the third trimester, alcohol can impede brain development, leading to learning disabilities, hyperactivity and attention deficit disorder.
The kicker: Heavy drinking is more likely to do damage. That makes sense. But what about light drinking? Researchers can’t predict what amount is tolerable for individual women and their children. Some may be fine, others may show developmental delays. Who wants to gamble on that? In addition, multiple studies indicate light drinking&emdash;a single beer a week, for example&emdash;correlates to greater risk of physical, mental and behavioral problems in children exposed in the womb.
The short answer: Just say no to any alcohol during all three trimesters of pregnancy.

Myth: It’s good to raise kids with wine at the table, even giving them little glasses of it, like they do in Europe.
The research: Around the table, at a party or anywhere else, kids need clear boundaries set forth about alcohol, says Tamu Nolfo, Ph.D., a local substance abuse prevention specialist and mother of two boys. She explains:

1 Their brains are still developing, and alcohol can hinder or alter that development. Why would I risk stacking the odds against them neurologically?
2 Because their brains are still developing, and the last region to fully develop helps them with reason and judgment, I would not want to confuse them. There are some things that need to be black and white, such as always wearing your seat belt in the car and not drinking alcohol until you are an adult. With an immature brain, it is not a hard leap to make that â€˜Mom gives me alcohol sometimes, so it must not be so bad for me.’
3 I am conscious of how I am socializing my children. I want them to know that they can enjoy a good meal, celebrate a special event, have a tough day or mourn a loss without involving alcohol. I have to role model that for them, too.
4 Finally, I would not provide them with alcohol under any circumstances because I simply do not know what their vulnerability to addiction is; I only know from the research that if they begin drinking before their 20s, they have a substantially greater likelihood of developing an alcohol problem than if they wait.

The kicker: While many of us adults enjoy moderate alcohol use as part of a healthful lifestyle, we send the wrong message to children when we give them wine or beer at home. It’s illegal in the United States, for starters. Besides, there is no evidence that says Europeans are any better off when it comes to alcohol addiction. The death rate from liver cirrhosis in France, for example, is 1.5 times greater than in the U.S., presumably because the French drink 1.5 times more per capita than Americans.
The short answer: Don’t serve alcohol to your kids at the table, even on special occasions.

Myth: Kids are going to experiment with alcohol anyway. Better they do it young and get it out of their systems, especially before they start driving.
The research: There are two issues when it comes to adolescent alcohol use. First is the effect alcohol has on the growing brain. Moodiness and pimples get all the attention, but the adolescent brain’s leap into higher conceptual and moral reasoning is the big event during the teen years. Young brains are busy, more vulnerable. Kids just can’t process alcohol like adults can. Alcohol kills rapidly growing cells (witness its use as an antiseptic). And just as with the developing fetus, the immature brain and organs take the hit. Alcohol exposure to the developing hippocampus, for example, may impair learning and memory in teens more than adults. Secondly, researchers identify alcoholism itself as a brain disorder. So the developing brain of a preteen or teen that is exposed to alcohol risks not only developmental interruption but increased danger of alcohol use disorders.
The kicker: Experts aren’t just worried about the damage alcohol does to a teen’s body; they’re worried about long-term abuse patterns. The earlier a kid starts drinking, the more likely she will develop a drinking problem, according to studies that show a 40 percent likelihood of alcohol dependence for those who begin drinking at age 14 versus the 10 percent dependence rate among those who start drinking at age 20 or later.
The short answer: Yes, kids will experiment. But the later they start drinking, the lower the risk to their bodies and brains. Remove, lock up and/or carefully monitor the alcoholic beverages in your home, starting when your kids are age 10 or younger.

Myth: Alcoholism is genetic. There’s nothing I can do to influence my kids.
The research: True, DNA contributes many factors to the risk of alcohol abuse. There’s no one gene with the scarlet letter A on its chest. Rather, experts point to multiple genes that determine alcohol metabolism and nervous-system functioning, including neurotransmitters like dopamine and serotonin. Yet even geneticists balk at pinning the alcoholism rap solely on biology. About half of the risk comes from genetic factors, the other half from the environment, according to epidemiological studies. Parenting, peers and other environmental factors weigh just as heavily as genes.
The kicker: Parents make a difference. Make and enforce strict rules and clear consequences for drinking or possessing alcohol. Be involved in your child’s life. Know their friends. Know their friends’ parents and their rules about alcohol use.
The short answer: Risk of alcohol problems hinge upon both nature and nurture. Stack the nurture deck with positive parenting to offset any known or unknown genetic factors.

For more information, contact the National Council on Alcoholism and Drug Dependence, Sacramento Region at (916) 922-9217 or go to addictiondata.org.