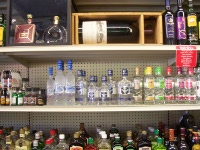 I was at my local quickie mart last night buying a candy bar when I spied something unexpected: a dusty large-format bottle of Robert Mondavi 1983 Cabernet Sauvignon. Cradled in a wooden display box, it was surrounded by bottles of cheap, no-name booze. The price tag: $899.99. Wow.

The 6-liter bottle has been in the store for years, says Mike Singh, who owns and manages Jay Street Liquor at 3712 J Street. “I don’t know if the wine is still good,” he says. “But they don’t make it any more.”

Singh’s store carries the usual fast-mart merchandise: candy, cigarettes, lottery tickets and booze. While he’s fond of his Mondavi, he’s even prouder of a $6.99 bottle of Urapar vodka, named after the village in India where he’s from.

The Mondavi Cab isn’t even the most expensive item in the store. That would be a bottle of Louis XIII de Rémy Martin cognac, complete with presentation box. Its price: $1,599.99.