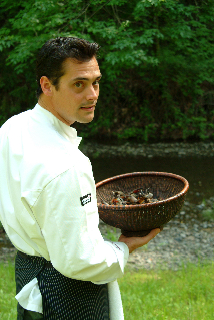 Kelly McCown, a Napa chef with an impressive resume that includes stints at Martini House and Rubicon Estate Winery, is taking over from chef David English. He starts today and will work alongside English until July 21, when he assumes control of Ella’s kitchen.

The Selland family, which owns Ella, hired McCown after a nationwide search that included interviews with chefs from New York, Chicago and San Francisco. “This is a horrible time to be in the restaurant business, but it’s an incredible time to hire a chef,” said Josh Nelson, one of the restaurant partners.

After interviewing “a lot” of chefs, the family narrowed the field to four, who auditioned by cooking for the Sellands. “We thought Kelly was the best fit,” Nelson explained. “His food was very Ella.”

Nelson said McCown, a trained pastry chef, will focus his immediate attention on the dessert menu (look for changes there) and will also revamp the cold-bar menu. “We want to make more bar-friendly foods,” Nelson said.

A 1990 graduate of the California Culinary Academy, McCown has been named a rising star by a number of magazines, including Bon Appetit, Seattle Magazine and Japanese GQ. In addition to Rubicon Estate Winery and Martini House, he has worked at Wine Spectator’s Greystone Restaurant at the CIA in Napa and Flying Fish in Seattle.

English, who started with the restaurant when it opened almost two years ago, is planning to travel through Italy before returning to Sacramento and opening his own restaurant.