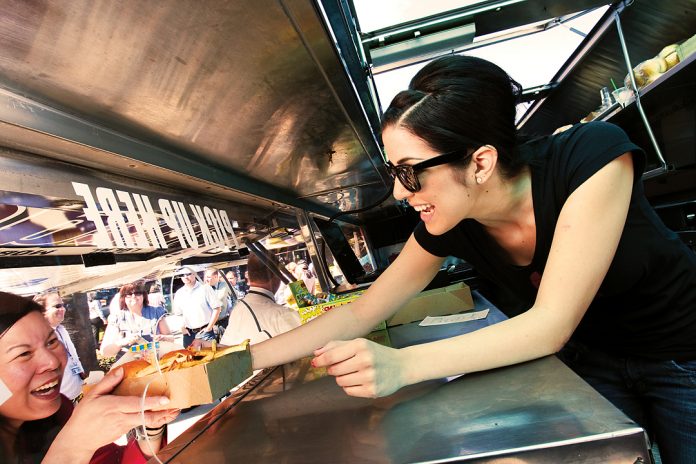 In Los Angeles, Portland and other major U.S. cities, gourmet food trucks are the hottest thing since Asian-fusion tacos. They’re even the subject of a TV show, Food Network’s “The Great Food Truck Race.” In February, Sacramento got its first taste of the mobile food trend when Mini Burger Truck hit the streets, tweeting its location as it moved from spot to spot. The truck has attracted tons of media attention and hordes of customers. Recently, SacMag followed along to see what the fuss is all about.

10:35 a.m. Loaded with Five Dot Ranch beef and freshly baked brioche buns, Mini Burger pulls out of a warehouse parking lot near Richards Boulevard. Behind the wheel is Davin Vculek, a 28-year-old classically trained chef who quit his job running Guy Fieri’s restaurant kitchens to open his own restaurant on wheels. With two employees in the jump seat, the truck heads down Seventh Street, passing the deserted railyards and Downtown Plaza on its way to its destination: the massive CalPERS complex at Fifth and R, home to thousands of hungry state workers.

10:48 a.m. A block from CalPERS, the truck pulls into a metered parking space on the street. Cash register operator Mandi Pisano tweets Mini Burger’s location on a laptop, then hops out to feed the meter while Vculek fires up the propane-powered grill and fryer. In less than a minute, two women have materialized beside the truck. A pair of Crystal Dairy delivery men jump out of their vehicle and join the line.

10:58 a.m. Pisano starts taking orders from the truck window. The menu is simple: four varieties of mini burger, plus hand-cut french fries and sweet-potato tots. As the orders come in, grill chef Juan Reyes plunges a 2-ounce scoop into a tub of freshly ground beef, forms a little patty and throws it on the sizzling grill. Already, a dozen people are in line, and more are streaming down the sidewalk. It looks as though somebody rang a dinner bell. In fact, for food trucks like Mini Burger, Twitter is the 21st century version of the dinner bell.

11:07 a.m. Working in a space that’s smaller than most people’s bathrooms, Reyes removes burgers from the grill and passes them to Vculek, who adds sauce (Sriracha mayo, roasted red pepper aïoli, barbecue or “house” sauce) and toppings: Asian slaw, pea shoots and lotus chips for the Ninja burger; grilled mushrooms and onions for the Philly; bacon and tomato for the Cowbell; lettuce, tomato and grilled onions for the Original Gangster. Everything is made from scratch and cooked to order. Periodically, Vculek plucks the metal basket out of the fryer, dumps fries or tots into a stainless steel bowl and douses them with salt. Then he places the food in cardboard boxes lined with wax paper and hands them out the window to waiting customers.

11:13 a.m. There are close to three dozen people in line, plus another 10 waiting for their orders. As the scent of grilled beef fills the air, people laugh and chat with their office pals. It feels like a party. “I love it,” says state worker Robert Hernandez. He gets tired of eating at the CalPERS cafeteria, and the closest restaurant is several blocks away. Hernandez says he’d like to see more food trucks in Sacramento. He’s getting his wish: Two new trucks—Drewski’s Hot Rod Kitchen and Mama Kim on the Go—recently hit the streets. And in April, a couple of local food bloggers held a mobile food festival, called SactoMoFo, in Fremont Park to promote food trucks.

11:20 a.m. The crowd has gone viral: There now are 60 people either standing in line or waiting for their food. Vculek’s not surprised. A week earlier, he had his single biggest day ever outside the state’s Food and Agriculture building, serving 300 people in a couple of hours. Evidently, state workers like to eat. “We’re going to get slammed,” he predicts.

11:34 a.m. Under a city ordinance that prohibits food trucks from staying in one spot for more than 30 minutes, Mini Burger Truck should be moving to a new location by now. Vculek points to the dozens of people waiting in line. “We can’t move without sacrificing a lot of business,” he says. The ordinance was designed to protect land-based restaurants from unfair competition from food trucks, which don’t have the same steep overhead costs. But so long as Vculek doesn’t park his truck too close to a restaurant, the city apparently is willing to turn a blind eye to the infraction. “The city’s been pretty friendly,” he says. “If nobody complains, we’re OK.” Later this week, he’s meeting with members of Mayor Kevin Johnson’s staff to talk about how to make Sacramento even more food-truck friendly.

12:19 p.m. The truck is now flooded with orders. When Pisano tells customers it will be 30 minutes “give or take” until they get their food, no one complains. A week ago, a customer went on Yelp to criticize the wait. “Come on,” Vculek says cheerfully. “Show me a restaurant with 50 people in line where you don’t have to wait.”

12:48 p.m. The line has shrunk to seven people. The CalPERS lunch rush is over. Pisano tweets that the truck will move soon to another spot downtown.

1:46 p.m. Vculek finally pulls into a space on 13th Street near I, and Pisano tweets the new location. A handful of customers appear—nothing like the earlier CalPERS crowds. Downtown is good for business, but so are suburban locations like Gold River, Roseville and Elk Grove. “We always get a crowd when we go to Elk Grove,” he says.

2:18 p.m. With business down to a trickle, Vculek settles into the driver’s seat and pulls out his phone to check his e-mail. He’s got to snatch these moments when he can: His life is crazy-busy right now, between running the truck six days a week and planning for the future. Vculek rents the truck out for weddings and other special events, and he’s thinking about adding a breakfast shift to the schedule. He’s having a second truck custom-built; the one we’re in now is a dicey 34-year-old former taco truck that frequently breaks down. Thinking big, Vculek wants to oversee a food truck empire, with at least four trucks in Sacramento and more in other cities.

2:48 p.m. There haven’t been any customers for a while. Pisano looks hopefully at Vculek. “Finito?” she asks. Yes, he says, they’re finished. Time to go back to the warehouse and regroup. Vculek just learned about a Save the Kings rally planned that evening at Cesar Chavez Park. It could attract several hundred hungry fans. So in a couple of hours, he’ll head back out, tweeting and cooking—just another day for Sacramento’s first gourmet food truck.