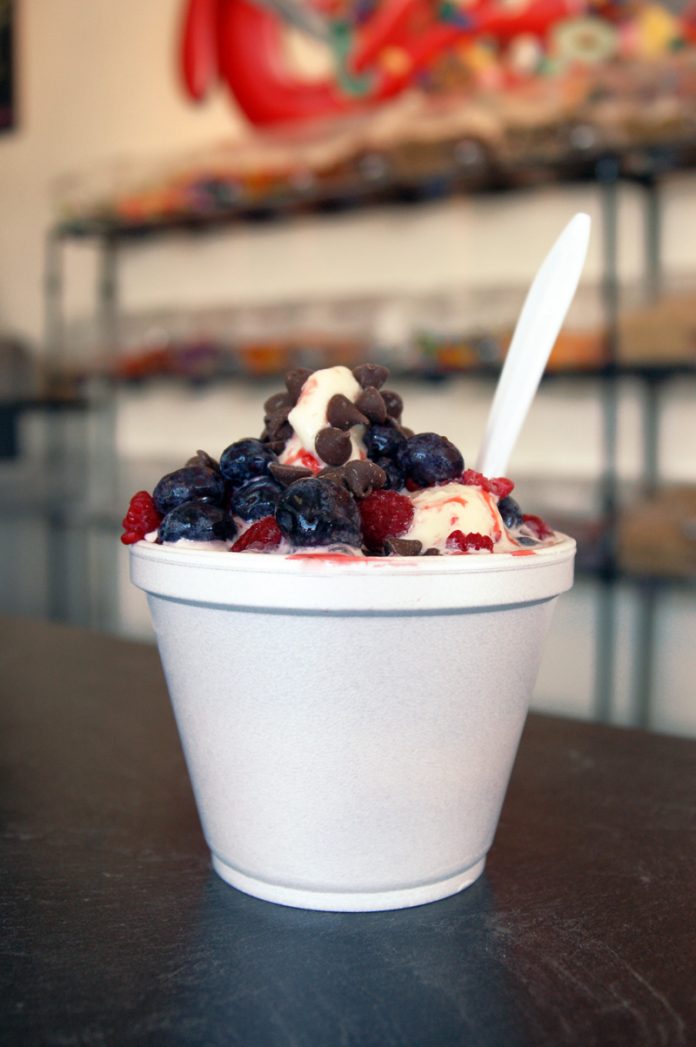 Somewhere between the leg-warmer fad of the ’80s and grunge rock of the ’90s, frozen yogurt got lost.
But frogurt&emdash;aka fro-yo or fro-yo-yo&emdash;is enjoying a sweet renaissance that’s redefining its place in dessert pop culture. In Sacramento, yogurt shops are seeing an influx of new customers in search of swirls and whirls of frogurt with plenty of toppings.

In Los Angeles, the fro-yo war has been waged for a while with the explosion of Pinkberry. In case you aren’t in the loop (or is that swirl?), Pinkberry is a Korean-imported chain that serves tart, yogurt-style creations at 25 calories an ounce&emdash;before the gobs of toppings, of course. The craze has caused frogurt turf wars, a wave of imitators and an actual investigation that begs the question: What makes yogurt, yogurt?

Here in Sacramento, frozen yogurt is a smidgen less controversial. While we don’t have a Pinkberry, we do have yogurt shops giving ice cream parlors some serious competition.

Big Spoon Yogurt, at J and 36th streets, has been around for almost three years, but its popularity is on a major upswing.

It’s blowing up so fast, says Samanthia Warren, general manager of the East Sacramento shop. You can act like a kid. Use your imagination to create. It’s limitless, and people like that.

With 75 different toppings, the possibilities at Big Spoon range from tooth-aching concoctions of sweet vanilla bean yogurt with bubblegum balls, rainbow sprinkles and whipped cream to simple swirls of boysenberry yogurt topped with a few gummi worms for giggles.

In the Land Park area, Yogurtopia on Freeport Boulevard is a newbie offering frozen yogurt in a similar self-serve style with 41 toppings&emdash;not too shabby. But Yogurtopia‘s strength is in its healthful selection of sliced fresh fruit: kiwi, strawberries, boysenberries, mangoes and raspberries. It also has granola toppings that, when paired with nonfat or low-fat frogurt, could almost make for a guiltless treat.

Yogurtopia also has two flavors of European-style frozen yogurt, which is creamy, tart and sweet. The staff here refers to it as the true yogurt, with an icy-creamy, gelatolike texture that people seem to either love or hate.

Yogurt makes you feel like you’re eating healthier, says Melissa Sparks, 18, trying out Yogurtopia for the first time. It’s not as rich as ice cream, but it’s still good.

Craving frogurt? Get your fix at one of these places:

To read up on Pinkberry, go to www.pinkberry.com.

Know of a frozen yogurt shop you think we should check out? Send me an e-mail at cindy@sacmag.com.