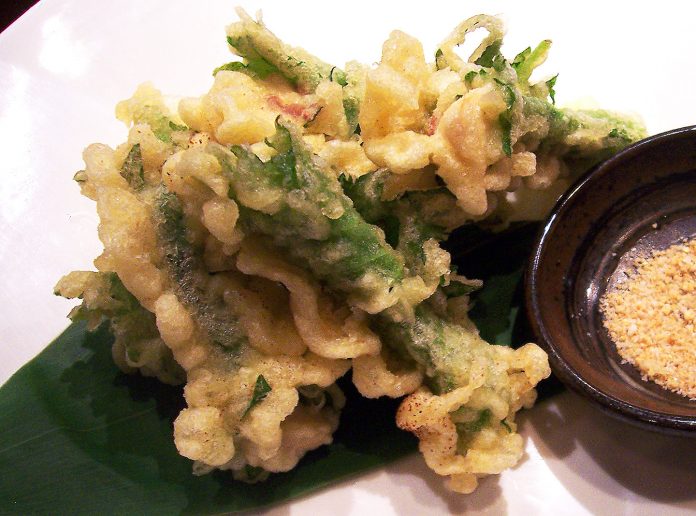 It’s hard to believe our economy is faltering when you visit a local Mikuni. Packed with enthusiastic sushi gobblers, the popular restaurants never seem to have a problem filling up their seats (or bar stools). Such was the case at the chain’s newest venture, Mikuni Kaizen, which I stopped into on Friday night. Thronged with diners, the space buzzed with excitement as harried waiters and hostesses darted amongst the crowds and restless patrons waited at the front of the restaurant for a table or coveted spot at the sushi bar.

The re-designed space, with brightly-colored walls, upbeat artwork and an enormous, shiny silver octopus hanging from the ceiling, has transformed the space last occupied by Sake House. The warehousey, urban, hip vibe of the former lounge has morphed into Mikuni’s trademark frenzied, friendly vivacity, and it seems pretty clear that Roseville residents have embraced the restaurant with vigor.

The menu differs from other Mikuni restaurants in that it places great emphasis on a huge selection of tapas ((I counted 73). All your beloved, lavishly-sauced sushi rolls are also available, but they are downplayed by the waiters, who encourage diners to make adventurous forays into the lineup of small plates.

We sampled the Kaizen baby back ribs, which offered a great flavor but were disappointingly dry; and an intriguing seafood tapa called “Healthy Tempura.” Chunks of fish were wrapped inside large shiso leaves with garlic and plum paste, then battered and deep-fried in the traditional way and served with a yellowish yuzu salt. The dish was attractively presented, but again, I found it to be very dry – I longed for a sauce to dip the tempura into; and the powerful, herbaceous flavor of the shiso leaf completely dominated the other ingredients. A third tapa, the Ika Geso Karaage – fried squid tentacles – had a nice spicy snap, but was frustratingly rubbery. The best dish of the night was an old fave, the “Incredible” roll, filled with spicy tuna and panko-fried shrimp, then torched with great flourish by our cheery sushi chef.