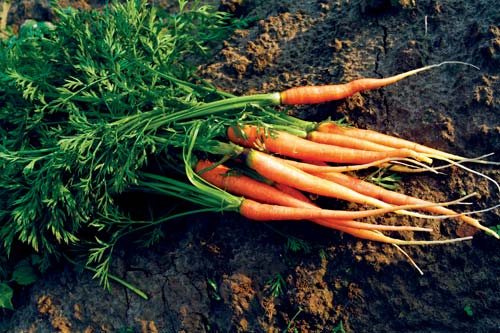 Looking to get more fresh produce into my diet, I turned to community-supported agriculture. What I got was a food adventure.

Seven months ago, on a quest to lose some belly flab, reinforce my immune system for cold and flu season and support our region’s food economy, I joined a CSA. CSA stands for community-supported agriculture, and it basically means you pay for a share of a nearby farm’s harvest. You write a check and collect a box of organic produce, fresh from a local farm, every week.

I had long been curious about CSA. The idea of belonging to an organic farm sounded earthy and healthy and community-connected, and it appealed to the part of me that longs for a simpler, more meaningful existence. I envisioned opening my front door to a wooden crate full of vibrant produce, delivered by a guy in overalls from the back of his one-speed bicycle. I’d make gorgeous salads and lovingly teach my daughters how to shuck sun-warmed corn and de-string tender green beans. My husband and I would lose our midlife midsections, and our skin would glow from the vitamin-packed greens we consumed. I would feel a deep sense of connectedness to our agricultural community and to the delicious bounty it produces.

I found a few local and regional farms that offer CSA, several of them in Yolo County. But I quickly discovered that no farmer would be delivering vegetables to my door&emdash;I had to pick them up at a delivery drop-off point, none of them near my home in Folsom. I narrowed my choice of farms to one that delivers to an East Sacramento location every Tuesday, which is a day I spend in Sacramento magazine’s office at 56th and H streets. Logistically and gaswise, it made sense. I also learned that I wouldn’t be able to choose which vegetables came in my box each week&emdash;you take what you get, and you get whatever’s in season&emdash;but, being a reasonably open-minded eater, I figured I’d be OK as long as I didn’t receive too many beets or eggplant.

My farm: Good Humus Produce, located in Capay Valley, about 40 miles north of downtown Sacramento. Owned by Jeff and Annie Main, Good Humus has been growing organic fruits, vegetables, herbs and flowers since the mid-’70s. The Mains started their CSA in 1993, so I figured they knew what they were doing. I called the farm, spoke briefly with Annie and made arrangements to join the Good Humus CSA starting the week of Sept. 10. I eagerly anticipated my first box of goodies and committed to consuming every scrap I received.

My first box was due at the drop-off sometime after 3 p.m. the second Tuesday in September. I pulled up in front of a home in the Fabulous 40s and saw stacks of white cardboard boxes on the porch. Following the instructions Annie Main had given me, I checked my name off on a clipboard and took one of the boxes, which felt heavy and gloriously dirty. I set it on the front seat of the car and cracked it open. Inside: a newsletter from the farm with recipes, four small ears of unshucked corn, three lemon cucumbers, three ripe red tomatoes, a melon, three green peppers, a bunch of tarragon and&emdash;uh-oh&emdash;a large eggplant.

At home, my daughters got involved. Seven-year-old Melissa immediately ate two of the tomatoes, the juice dripping off her chin and onto her shorts. These are the best tomatoes I’ve ever had, she proclaimed. She would have eaten the third if I’d let her, but I wanted a taste of the tomatoes, too.

Anna, 10, hates vegetables but loves to help in the kitchen; she said she’d husk corn. Standing in front of the sink, she gripped the first ear of corn and pulled. Suddenly, she screamed and threw it into the sink. Worms! she cried. Sure enough, the top of the corn ear was rotten and chewed, and two plump worms wiggled around in the corn silk. A quick study of the other ears proved they were all infested with worms. Between this and the eggplant, I was hugely disappointed. The peppers looked small and dirty, the cucumbers bruised and the tarragon a little worn out, too. Not only that, but the melon&emdash;which looked like a cantaloupe&emdash;made the kitchen smell like garbage. This CSA thing was a bust.

But I was determined to eat every blasted item in the box. So I grabbed a sharp knife and cut the mushy tops off the corn, leaving four truncated ears. I shucked them myself&emdash;Anna and Melissa weren’t coming near them&emdash;and dropped the corn into a pot of boiling water. I scrubbed and sliced up the cucumber and the last tomato, then doused them with vinaigrette.

Then came the taste test.

That corn was incredible. It was ugly-looking&emdash;not like the perfect, plump, yellow stuff from Raley’s&emdash;but it tasted better than any corn I’d ever had. Sweet, crisp, fresh. No wonder the worms liked it. Melissa and I argued about who deserved the last piece. In the end, I cut it in half, hardly believing I was battling my daughter for a 6-inch length of corn on the cob.

The cucumbers and tomato, too, had a vibrant, sunny taste that made even my garden tomatoes taste bland by comparison. When I cut into the stinky melon later that evening, it was juicy and smooth. I tasted a chunk; it was ripe and perfect. I would put some in a smoothie the next morning. My spirits lifted, and I reminded myself that this was organic produce&emdash;no pesticides, no growth enhancers. Just pure vegetables and fruit. From my very own part of the world.

We ate every item from that first box except the eggplant. I had good intentions&emdash;searched online for a recipe, then sliced the eggplant, brushed it with olive oil and garlic and set it under the broiler. When I turned my back on the oven, though, the eggplant shriveled up and burned black, filling the house with an oddly delicious-smelling smoke. It tasted rubbery and scorched. I sent it down the disposal.

In the past seven months, the eggplant has remained my only failure. For the first few weeks, we got wormy corn. We diligently cut off the tops and greedily gobbled it up. Teeny, sour-looking Bronx grapes turned out to taste like candy. Tomatillos made a delicious chili verde. Acorn squash baked up nutty and sweet, perfect with just olive oil and sea salt. Not everything has been great: String beans were disappointingly tough and stringy, and one butternut squash arrived rubbery and fibrous. Many of the vegetables have been gloriously deep-hued and well-formed; others, particularly toward the end of their season, have looked a little the worse for wear or shown signs that scavengers had gotten to them first.

When the weather cooled, winter greens loaded the box. Turnips with tops, carrots with greens, salad mixes, spinach. (Nothing like knowing where your spinach comes from and who is growing it for you, said the weekly newsletter that arrived with that box shortly after the E. coli scourge.) I have baked turnips (not bad), made huge salads, stir-fried lots of zesty greens and added bitter greens to my fruit smoothies every morning. (Makes a very ugly smoothie, but tastes great and heavies up the health benefits.) We have discovered some produce we never would have chosen at Raley’s: sunchokes, for example, rutabagas, finger-length radishes and tatsai (greens). My younger daughter takes green-topped, supersweet carrots to school, where she passes them around the lunch table so her friends can eat like bunnies.

It’s definitely been a food adventure for my family. I still buy produce from Raley’s and Sacramento Natural Foods Co-op: We’ve become big vegetable eaters, so the one box doesn’t support my family for a week. And besides, when I need tomatoes, I need tomatoes. As for helping with weight loss, perhaps it does, because there’s something about eating copious amounts of vegetables that reduces our cravings for junk food and motivates us to get out and walk. And health? I got through the winter season with one minor cold that lasted just three days. (My husband, on the other hand, was knocked flat by the flu for 10 days in January, despite his veggie-eating ways.) And there’s the feel-good aspect of eating locally grown, seasonal produce. I look forward to Tuesdays, when I collect my CSA box, full of treasures that were grown purely and safely within our agriculturally rich region. The CSA boxes have forced me to stretch as a cook, to create dishes out of sunchokes and rutabagas and, yes, beets. Thankfully, though, so far we’ve only gotten one eggplant.

For recipes that accompany this story, check out sacmag.com.

What’s in the Box

CSA produce boxes hold different contents every week, based on the season.
A few examples: