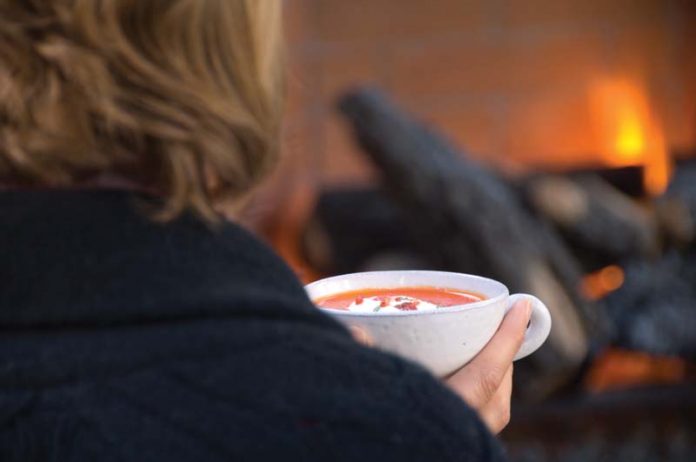 Elaborate parties donâ€™t seem to be in order this year, do they? So we asked local food pro Andrea Hagan to come up with a party plan thatâ€™s easy and inexpensive to execute. Something unfussy, we said. Oh, and one more thing: It has to include foods that could be enjoyed by a group of friends sitting around the fireplace. Hagan ended up looking to that childhood favoriteâ€”tomato soup and grilled cheeseâ€”for inspiration. But this is a soup-and-sandwich combo with the flavors turned waaay up.

For a no-work nibble when your guests arrive, set out a bowl of olives. â€œItâ€™s my absolute favorite way to start off a meal,â€ says Hagan, a food consultant who has created recipes for Williams-Sonomaâ€™s catalogs. â€œThey pack a lot of intense flavor, which is what I yearn for.â€ She chooses a mixture of bright-green Castelvetrano olives and dry-cured black olives.

For the soup, Hagan roasts plum tomatoes and cippolini onions in a hot oven to caramelize them, adding a layer of flavor. (Not familiar with cippolinis? Theyâ€™re small, flat, thin-skinned onions that are sweeter than yellow onions.) To serve, she pours the soup into mugs and tops each one with a dollop of pancetta-flavored cream and a sprinkling of crispy pancetta bits.

Hagan knows that grilled-cheese sandwiches donâ€™t have to be pedestrian. For these Spanish-inspired panini, she uses Manchego cheese (a Spanish sheepâ€™s milk cheese) and ultrathin slices of salty Serrano ham. She adds smoked-paprika caramelized onions for sweetness and peppery arugula for a bit of bite.

For a rich, satisfying end to the meal, Hagan offers her recipe for bittersweet hot chocolate.

Best of all, says Hagan: Everything can be done ahead of time. Make the soup a day in advance, and assemble the sandwiches early on the day of the party. Pop them in the panini maker when your guests arrive. You can even prep the hot chocolate beforehand; just reheat and serve.

Toasted Manchego Panini With Serrano Ham and Smoky Caramelized Onions
If you donâ€™t have a panini press, you can make these sandwiches in a frying pan.

In a large frying pan, heat the oil over medium heat. Add the onion to the pan and cook, stirring often, until wilted and beginning to caramelize, about 25 minutes. Stir in the smoked paprika, then remove from the heat.

Place the bread on a work surface in pairs. On one half of each pair, spread 2 tablespoons of the onions, then top with three slices of cheese. Lay two slices of Serrano ham on top of the cheese, and a layer of arugula atop the ham. Cover the arugula with the other slice of bread.

Brush or spray olive oil onto the outside of the sandwiches, then place in a preheated panini press. Cook until the outside is golden and the cheese is melted, about 3 to 4 minutes. Slice into quarters and serve immediately. Serves 4. Â Â Â  Â Â Â

Preheat oven to 400 degrees. Destem the tomatoes and slice them in half lengthwise. Peel the cippolini and halve them horizontally so that you end up with two thin rounds. Toss the tomatoes and the cippolini with the olive oil and spread in a single layer on a sheet tray. Place in the oven and roast until the onions are soft, about 35 minutes. Transfer the tomatoes and onions to a blender. Add 1 cup of the chicken broth and purÃ©e until smooth, about 2 minutes. Pour the mixture into a large saucepan and add the remaining chicken broth, salt and thyme sprigs. Place over low heat and simmer for 20 minutes.

In a small frying pan, cook the pancetta until crispy. Remove to a paper towel, reserving the drippings. Whip the cream until slightly thickened, then add 1 teaspoon of the pancetta drippings and a pinch of salt.

Ladle the tomato soup into a mug and top with a dollop of the pancetta cream. Garnish with a few thyme leaves and the pancetta bits. Serve immediately. Serves 4.

In a small, heavy saucepan, heat the milk over medium heat until almost boiling. Stir often to avoid scalding the milk. When the milk is almost boiling, turn off the heat and add the chocolate. Whisk constantly until the chocolate is melted. Pour or ladle into small cups. Top with a little whipped cream and sprinkle with the paprika. Serve immediately. Serves 4.