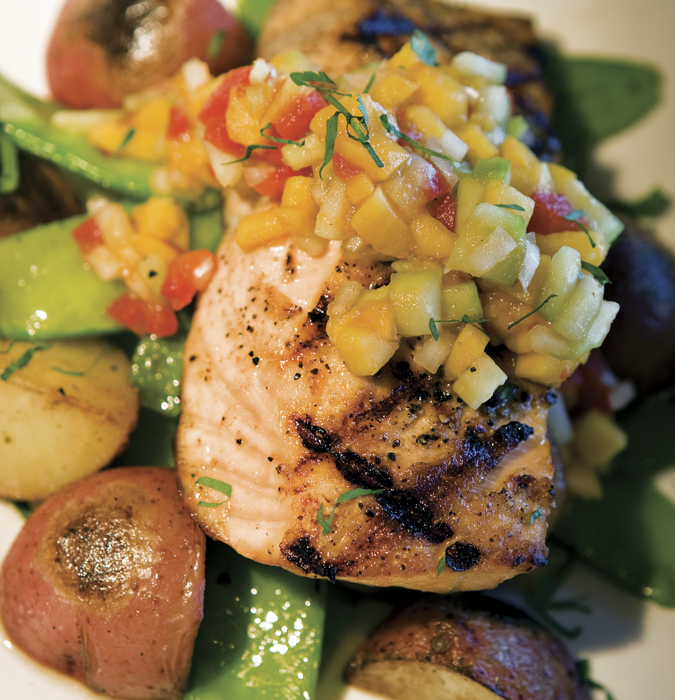 We Sacramentans love our rivers. We swim and frolic in their swirling waters, we fish from them in silly-looking chest waders, and we lounge lazily on their sandy shores, shellacked in sunscreen. But one of our favorite ways to appreciate these lovely rivers is by dining alongside them.
Unfortunately, restaurants with gorgeous river views often fall short when it comes to the food. In this region, it can be a real challenge to find a waterfront restaurant with exemplary fare.
So I was pleased recently to discover spunky Pearl on the River, which very quietly opened for business in mid-April. Employing a “soft opening” tactic designed to give the staff plenty of time to find their sea legs before the restaurant becomes too busy, it already appears to run like a well-oiled machine. Pearl’s seafood-centric cuisine may still be a work in progress, but I admire owner Jeff Pooler’s ambitious vision and commitment to upping the ante.
Pearl’s walls are swathed in a cool beige color, and the restaurant’s lower level features a handsome, dark, glossy wood bar. Tables in the lower dining area are placed next to windows so diners can drink in views of the river and marina below. Spiky plants erupt out of black, boxlike planters, and tasteful artwork adorns the walls.
Climb the staircase to the upper level and you’ll spy its main attraction: a sleek, freestanding demonstration kitchen that resembles a sushi bar, with seats where you can watch your food being prepared. A tall, thick glass divider separates diners from the cooks, making it difficult (and somewhat comical) for the two sides to communicate with each other.

All of the restaurant’s seafood is sourced from the California/Hawaii/Pacific Northwest triangle, and many of the ingredients are purchased locally. After trying a number of dishes at Pearl on the River, I have the sense that the kitchen is still trying to find its groove. Some were slightly perplexing, others lacking a vibrancy or clear vision. However, the new restaurant does offer a selection of pleasing choices.
Appetizers include lighter-than-light fried calamari, a dish found regularly on restaurant menus but often executed poorly. Pearl’s version is delightfully crispy (with minimal greasiness) and served up with a bright lemon aioli. The meaty, crusty crab cakes are another winning appetizer, as is the bay shrimp Louie, lacquered with a fantastic Thousand Island dressing. But I wouldn’t order the oysters Rockefeller, topped with bits of bacon, sautéed spinach and overly thick béchamel sauce and baked with a topping of Gruyère cheese. After sampling one, I realized they hadn’t been in the oven (or under the broiler) long enough to actually cook the oyster, which remained essentially raw, and the appetizer had an odd, sweet flavor contributed by Sambuca, an anise-flavored liqueur.
On one visit, I tried an ahi sandwich prepared with a portion of fish so small that it was almost humorous. Overwhelmed by a soft, puffy roll and a slick of strident wasabi aioli, the ahi was indiscernible and the sandwich underwhelming. A fish taco plate that same day featured Mexican spice-rubbed tilapia piled on springy cabbage and sprinkled with pepper Jack cheese. While pretty to look at, the dish was curiously flavorless.
Other seafood dishes I sampled included an enormous cioppino—an impressive clutch of prawns, shrimp, mussels, crab and chunks of fresh fish in a tomato broth—and a hearty, beer-battered combination seafood platter, composed of thickly crusted prawns, scallops and big hunks of fresh salmon with a generous portion of tartar sauce.
The restaurant offers a nice selection of desserts, including Key lime pie and cheesecake. On all of my visits, the food was served by a team of engaging wait staff whose attentive, warm service certainly enhanced my meals.
Pooler may have some fine-tuning of the menu to do, but with an eager, friendly staff and a stunning river view to keep the customers coming in, he’s made a fine start.