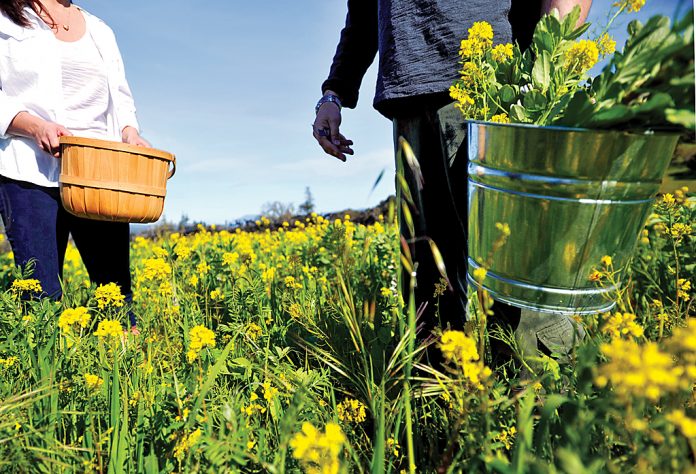 Foraging for food is all the rage these days. We go on the hunt for wild edibles with Kelly McCown, the star chef at downtown’s Ella.

Bring your boots. That’s the first lesson I learned when I joined chef Kelly McCown on a food foraging expedition in the Napa Valley.
McCown, the dynamic young star in the kitchen at Ella Dining Room and Bar, recently offered to show me how to hunt for wild edible plants. Foraging has been his obsession for a long time, starting back when he worked in Napa at Martini House and Rubicon Estate. Earlier this year, he held an event at Ella called Dinner at the Wild Table to showcase his favorite wild produce.
We arranged to meet early in the morning outside Bouchon Bakery in Yountville. With McCown and his girlfriend, Elizabeth Vianello, in the lead car, photographer Ryan Donahue and me following behind in another, we headed on Highway 29 toward Gemstone Vineyard, where Vianello works as managing director.

After a couple of minutes, we pulled over to the side of the road, next to a vineyard field ablaze with bright-yellow wild mustard. Originally planted by Spanish priests to mark the California mission trail, mustard grows promiscuously all over this valley. Setting out on foot, we headed into the field, which was thick with mud and muck after a week of heavy rains. Vianello was prepared: She wore rubber boots. My leather cowboy boots, however, were about to get ruined.

McCown reached down and plucked a slender mustard plant out of the ground. “The flowers are edible,” he said. “They’re good in salads.” When young and tender, the greens also make a nice salad. When they’re old and tough, McCown braises them in chicken stock.
After just a few minutes, we’d collected a basketful of wild mustard. “Let’s go find some miner’s lettuce,” said McCown as we walked back to our cars.

Miner’s lettuce grows prolifically all over Northern California. Crunchy and mild flavored, it has large, spade-shaped, bright-green leaves and tiny white flowers. Hank Shaw, the award-winning local food blogger and forager, calls it America’s gift to salad. It’s one of the very few native food plants we commonly eat, along with wild rice and cranberries.

We turned off Highway 29 onto a sun-dappled country lane lined with trees. A week earlier, McCown had seen clumps of miner’s lettuce next to the road here. Jumping out of the car, he quickly found his quarry growing like crazy on a skinny strip of roadside land. I was starting to feel a little disappointed. This was turning out to be almost too easy. I’d envisioned foraging as a treasure hunt. This was more like shooting fish in a barrel.

“There’s a difference between foraging and hunting,” McCown explained. Hunting for mushrooms involves a lot of work on your hands and knees in the forest. You may not find anything. Foraging is picking food right where it grows—often, just by the side of the road. “In Northern California,” said McCown, “there’s just so much stuff to be found.”

Growing right next to the miner’s lettuce was wild fennel, its lacy green fronds a dead giveaway. “It’s amazing in a salad,” McCown said. (Unlike Mediterranean fennel, you eat only the fronds, not the bulb.) When McCown worked at Martini House,

he would gently simmer the fronds in cream, then use the infused cream to make wild fennel panna cotta. At Ella, he likes to scrape the pollen off the plant and roast it until it acquires a nutty, almost popcorny flavor, then dust it on pork or tuna. At the end of summer, when the wild fennel plants grow 5 to 7 feet tall, he’ll dry the huge stalks and throw them on the fire to add flavor to barbecued meats and fish.
We’d had plenty of luck finding miner’s lettuce and wild fennel. But we struck out when it came to fiddlehead ferns, the highly prized, tightly coiled fronds of young ferns that pop up on upscale restaurant menus for a few short weeks every spring. McCown suspected another forager had beaten us to them. “The French Laundry’s right around the corner,” he said, laughing. “They’ll charge $250 for some weeds they got out on the road.”

McCown and the folks at The French Laundry have latched on to something that winemakers have known for years: The concept of terroir applies to food just as much as wine. You actually can taste the land in the miner’s lettuce. “Chefs are always trying to get close to their product,” McCown said. “This is about as close as you can get.”

Back in our cars, we drove a few hundred feet and stopped again. This time, McCown had spied some wood sorrel. “We called this sour grass when I was a kid,” he explained, grabbing a stalk and handing one to me to chew. The taste was tangy, sour and lemony. It adds a nice zing to salads, said McCown, who also serves wood sorrel purée with sweetbreads and apples at Ella.

A mile or so down the road, we came to a stream filled with cattails. Hopping out of the car, McCown scrambled down a culvert and whipped a knife out of his pocket. Grabbing the seed head, he scraped off some pollen. Like fennel pollen, it has a nutty flavor when roasted. Then he took hold of a cattail in both hands and starting pulling hard. He was trying to pull it out by its rhizomes, the vermicelli-like fibers embedded in the muck. Once you wash off the mud, you can sauté the rhizomes. “It sounds a lot easier than it looks,” he muttered as he yanked fruitlessly on the stalk. Temporarily off balance, he fell ankle deep into the stream.

By now, it was 10 a.m. Morning, it turns out, is prime time for foraging. The plants have had all night to soak up moisture, and they haven’t yet had to fight the harsh sun. Picked in the morning, wild edibles are fresh and strong. But pick them when it’s hot and they wilt quickly.
Driving on to our next destination, we passed through a residential neighborhood. My photographer wondered if we were going to forage in somebody’s backyard. “This is Bob’s house,” he joked. “He grows strawberries.”

Instead, we ended up at another winery. We stopped our cars and picked some wild chamomile and dandelion greens growing on a strip of land near the vines. “Um, are we allowed to do this?” I asked, something I’d been wondering throughout our little foraging adventure. “I live by the theory that it’s better to ask for forgiveness than permission,” said McCown. He admitted to hopping a few fences in his time. “Foragers and mushroom hunters all deny it, but everyone does it.” OK. Works for me.

We had just one more stop to make. Driving up the hill away from the vineyard, we suddenly found ourselves out of civilization and in the woods. “Westwood Hills Park” read a sign at a gated entrance. McCown and Vianello strode quickly up the steep hill, while I struggled to keep up with them, trying to dodge the mud and steer clear of poison oak. Every so often, McCown would stop and point out something: miner’s lettuce here, stinging nettles there. It was a little too early in the season for mushrooms, he said, though we saw a few. But in summer, the ridge will be full of wild chanterelles.

Finally, we stopped at the top of the ridge and took in the majestic valley spread out before us. I asked McCown what made foraging so appealing. It’s simple, he said: Food this seasonal and local just tastes better.
“Anyone can order a box of mesclun greens,” he added. “This is way more fun.”

WHERE THE WILD THINGS ARE

Interested in learning how to forage for food? A group called forageSF (foragesf.com) offers wild edible food walks in San Francisco and the East Bay. And check out this book: The Wild Table: Seasonal Foraged Food and Recipes by Connie Green and Sarah Scott. It shows you how to find wild edibles—and what to do with them once you get them home.