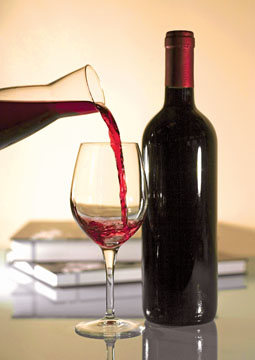 Ever the student, I once attended a wine class at a bookstore. My enthusiasm shriveled on the vine when I realized no wine would actually be served. Instead, the store was pushing wine books like an end stack of $9.99 Chardonnay in the supermarket.

At home, with glass in hand, I regularly skim through wine memoirs, guides and atlases aimed at everyone from dummies to academics. Good wine books entertain as they teach, and the best ones pose questions in generous proportion to the answers they provide. Here are three very different wine book finds that I’ll be giving as gifts this year:

â€¢ A Hedonist in the Cellar: Adventures in Wine by Jay McInerney (Knopf, $24)
This collection of essays on wine by best-selling novelist Jay McInerney (Bright Lights, Big City) is a literate travelogue flavored with art, mythology, pop culture, sexual metaphor and plenty of name dropping. On one page alone, he fits in a sledgehammer-wielding Angelo Gaja, President Kennedy, an undressed Alan Ginsberg, Jesus, the Puritans and French vintner Michel Chapoutier, a personal hero of mine, whom he quotes as saying about wine, If you think too much, you kill it. McInerney thinks a lot, actually, and his insights are golden, but for the most part he humbly describes wine people and places more clearly than most journalists.

From A Hedonist in the Cellar:  Don’t get me wrong, I have nothing against fruit. But I sometimes get tired of all this superextracted, alcoholic grape juice that seems like it ought to be served on toast rather than in a glass, and that tastes like it doesn’t come from anywhere in particular. These are wines that somehow remind me of the blind date I had recently with a woman exactly half my age. Our conversation had lots of italics and exclamation marks and very few parentheses or semicolons.

â€¢ The Cork Jester’s Guide to Wine: An Entertaining Companion for Tasting It, Ordering It and Enjoying It by Jennifer Rosen (Clerisy Press, $15)
Jennifer Rosen writes smart, funny columns that are syndicated internationally. Her schtick as the wine world’s pop princess belies a quirky Bjorklike sensibility. In her latest collection of columns, she teaches through Trojan horse stories, in which the wine education is hidden behind a raucous sense of humor and an irreverence that serves her readers well when it comes to separating the marketing from the Merlot.

From The Cork Jester’s Guide to Wine:  Four out of five Freudians agree: What I need is a good spanking. It’s the only way to explain why all winter long, while other wine drinkers cozy up to comforting Port and claret, I drink icy-cold Sauvignon Blanc.

Sauvignon Blanc spanks. It’s the gin and tonic of wines, replacing G&T’s squeeze of fresh lime with a stiff swat of acid. It’s perfect after tennis in the hot sun. Sometimes it even spangles with a hint of CO2 left over from the fermentation or (cover your ears, you don’t want to know) added later for that effect. No matter. It works. The sting makes you want to slap your cheeks and go Ah! like guys in aftershave commercials.

â€¢ Africa Uncorked: Travels in Extreme Wine Territory by John and Erica Platter (The Wine Appreciation Guild, $25)
In Napa, wine explorers must deal with mile-high winemaker egos, faux-castle eyesores and crowded tasting-room mosh in order to find the hidden gems beyond Highway 29. But for South African wine writers John and Erica Platter, a day’s research may include a hike among lemurs in Madagascar or a slog through a misty vineyard fertilized with the manure of the local Zebu cattle. The Platters follow the vines through Morocco, Kenya, Mauritius, Zimbabwe and elsewhere, sometimes with armed bodyguards in tow. The writing never sags: Small details regarding breakfast ingredients, words in the local language and astonishing landscapes kept me riveted, as did the myriad of inspiring winemakers along the way who reminded me of certain characters I know in the vineyards of California.

From Africa Uncorked:  The old phrase vin mdicin was still used by Algerians (and Moroccans) with pride, signifying not nasty medicine but the health-boosting tonic, the sunny ripeness their wine could inject into pallid, underpowered French specimens. Today all this would have been decried as a gigantic con or (even trickier) a huge admission of inadequacy in French wine.

After losing this jewel in its wine empire, a fifth of its entire crop, France character-assassinated Algerian wine as rough and tough! Yet the wines of Mascara, in the hills around the 600-meter-high mountains behind Algeria’s western coastal city of Oran, had been winning prizes in Paris since 1858, just three years after the famous Bordeaux Grand Cru Classifications were finalized.

Which African nation claims to be home to the world’s earliest viticulture? A. Tunisia
B. Morocco
C. Egypt
D. all of them

E-mail your answer to wine@sacmag.com by Nov. 15. The winner will receive a wine bottle coaster. Make sure to include your name, address and telephone number. The winner will be selected by random drawing from all the correct responses.

We’ve got a winner! In September, we asked: In James Bond movies, what is Agent 007’s favorite brand of Champagne? The correct answer: Bollinger. The winner, Cheryl A. Snook of Rancho Murieta, received an insulated wine tote.

* Elaine’s Pick of the Month

While reading of African wine travels, sip Rust en Vrede Estate from Stellenbosch, South Africa. The 2003 vintage is a deep-red blend of Cabernet Sauvignon, Shiraz and Merlot that will gain finesse in the cellar if you can keep your corkscrew away. Or go ahead and pop it. Take a break from turkey leftovers and grill up a Zebu steak! (Around $40, 58 Degrees & Holding Co., Nugget Markets, klwines.com)