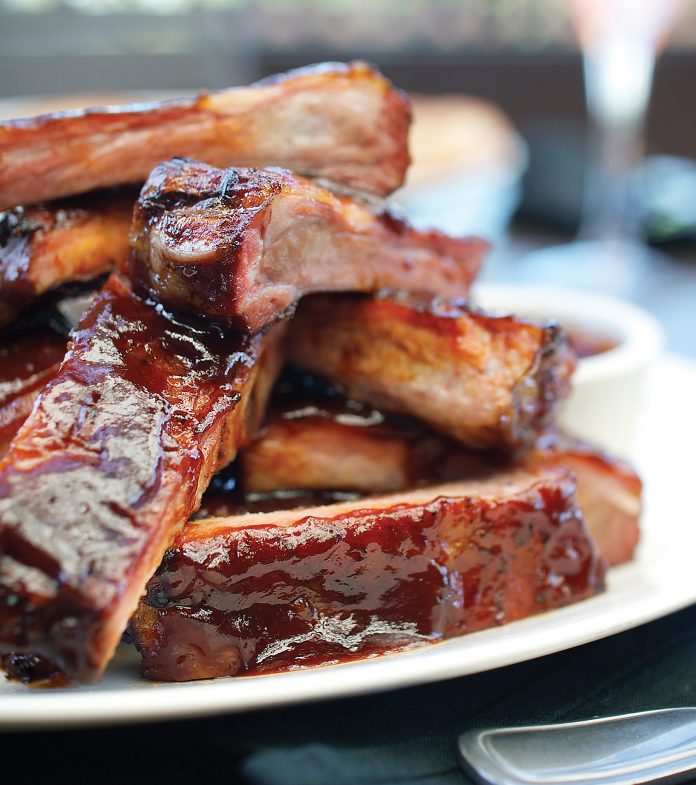 Iruminated on my age as I sat at the new Yard House in Roseville, its raucous energy reminiscent of a fraternity party. Around me, people whooped and hollered, gulped beer and dived eagerly into the restaurant’s huge entrées. I felt like an alien, surrounded by people who relished an ambiance—punctuated by throbbingly loud rock music—that I couldn’t seem to embrace. But it soon became evident that my resistance to the scene wasn’t age-related: I noticed folks much older than I am who clearly were having a ball.

So I focused instead on the dizzying number of beers available on tap (127, I was told), one of the big attractions of this cavernous, warehouselike chain restaurant, located in the Fountains shopping center. Fortunately, Yard House offers two free beer samples for people like me who freeze when faced with too many choices. After sipping a couple of “maybes,” I happily settled on a Deschutes Mirror Pond pale ale.

I then tackled the lengthy menu, which spans several pages and presents diners with another multitude of choices. Items range from a raft of salads and seafood dishes to pizzas, “house favorites,” sandwiches and steaks. Nibblers will be delighted with the lengthy and wide-ranging snack and appetizer lists, which include an appealing array of beer-friendly small plates such as deviled eggs, Parmesan-dusted onion rings, Buffalo wings and spinach cheese dip served with crispy flatbread.

I was interested to see that Yard House has a selection of vegetarian dishes made with a commercial meat substitute called Gardein—the first time I’ve seen this option on a menu. Clearly, vegetarians can have a field day (just like everyone else, it seems) at Yard House: Faux meat dishes include fried “chicken” strips, veggie orange peel “chicken” and a Gardein burger with all the fixin’s.

Wondering if the exuberant partiers around me were simply a bunch of very happy vegetarians, I couldn’t help ordering a Gardein barbecue chicken pizza, which turned out to be pretty damned good. Thin crusted, embellished with mozzarella and Gouda cheeses and sprinkled with fresh cilantro and chopped red onion, the pizza was chewy and pleasing, and the chunks of—um—chicken tasted vaguely meaty and looked like The Real Thing.

A porcini-crusted halibut was another fairly inspired choice: A juicy, beautifully cooked slab of fish arrived perched atop spears of asparagus, bok choy and a mound of mashed potatoes. Though the bok choy was practically raw, and therefore too crunchy and assertively flavored to eat, the dish boasted a fabulous, richly complex porcini mushroom sauce that worked beautifully with the fish and potatoes.
The kitchen’s calamari appetizer was thrillingly crusty and generously portioned, served with a vibrant spicy tomato sauce, and a rack of St. Louis-style ribs was another hit, though its side dishes—scrumptious creamed corn and a bowl of soupy, spicy pinto beans—easily eclipsed their main course. A gargantuan barbecue chicken salad looked like a riotous, colorful fiesta, with creamy chunks of avocado, corn, cheddar and Jack cheeses, and crunchy tortilla strips, all bathed in a lively cilantro-chipotle ranch dressing.

Other dishes I sampled weren’t quite as successful. A massive roasted turkey potpie, though rustically attractive, offered up big chunks of dryish meat and a smattering of vegetables in a pool of gloopy gravy, and a Parmesan-crusted chicken was so deeply fried that its exterior was blackish-brown. Served with a huge portion of tepid mashed potatoes, the chicken swam in an oddly unbalanced, curiously flavored sauce of sun-dried tomatoes and mushrooms.

Classic rock pounded aggressively in the background as I ate a warm, freshly baked brownie, crowned with a scoop of mint chocolate chip ice cream. Delivered by a perky, attentive waiter, it was a sweet ending to a larger-than-life restaurant experience. As the sugar hit my bloodstream and the soothing effects of the Mirror Pond ale slowly relaxed my nerves, I decided I might actually return to Yard House—armed, of course, with a set of industrial-strength earplugs and a trucker’s appetite.

KID PLAY: There’s a children’s menu and an activity workbook to keep them occupied while you eat