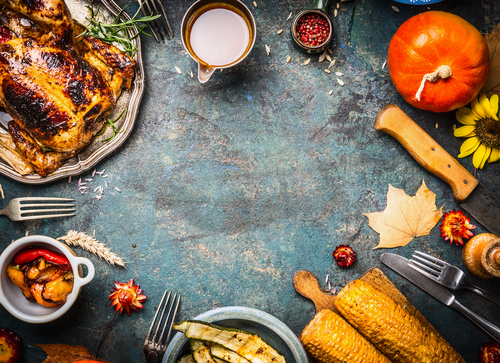 Recently, I conducted a highly unscientific poll on Facebook, asking friends if they regularly dine out on Thanksgiving. The responses were surprising. A whole lot of people thumb their noses at the traditional approach to turkey day. My friend, Lori Ostlund, and her partner have been going to the same restaurant on Thanksgiving for a decade. “We love it,” she says. “At dinner, we must order two appetizers, two entrees and two desserts, as well as a bottle of wine.” Another friend, Diane Dean-Epps, has also been dining out on Thanksgiving for years. “We go out for a no-muss, no-fuss approach to the whole shebang,” she writes. If you’re toying with the idea of starting a new tradition on Thanksgiving, one that doesn’t involve wrestling a 20-pound turkey, here are some tempting choices. You can thank me later. The Hyatt Regency serves holiday brunch with turkey, ham, waffles, composed salads and local cheeses. There’s also family style Thanksgiving dinner at Dawson’s Steakhouse in the hotel. “If people don’t want to cook, they are more than welcome to enjoy my food,” says executive chef Michael Grande. He’ll be on hand to make sure the turkey turns out perfectly. The Sacramento River Train offers a unique Thanksgiving experience: a three-hour, round-trip, “no mess, no stress” dinner train. The menu features traditional fare, including turkey, stuffing and mashed potatoes. Seating is limited; $93 per adult; $47 for children 2 to 12. The four-course holiday menu at The Firehouse Restaurant is enough to make even dedicated cooks drop their extra-large potholders and head out the door. How about herb-roasted organic turkey, merlot-cranberry relish and safe cornbread? Later, indulge in traditional pumpkin pie with candy butter crust or bourbon-pecan bread pudding. $59.95 per person; $24.95 for children 12 and younger. Want to escape but need to stick close to home? The Delta King, a historic riverboat docked in Old Sacramento, offers a holiday getaway without the getaway. Partake in the Thanksgiving buffet, including roast turkey with gravy and baked yams, spend the night in one of the Delta King’s staterooms, with views of the Sacramento River, and wake up to a deluxe breakfast.