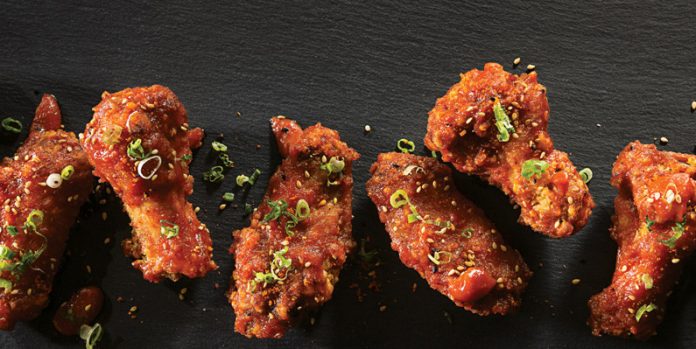 Only a few decades ago, wings were considered the least desirable part of the chicken, and they were mostly used for soup or stock. But due to their ready availability and relatively low cost, hot-sauce-soaked Buffalo wings became a popular bar food item in the 1970s and ’80s, and chicken wing franchise restaurants sprang up in the ’90s and proliferated in the 2000s.

As other food-service sectors suffered during the recession, chicken wings thrived, and today they are more popular than ever. Transcending their humble origins, wings are now found on nearly every menu in town, from sushi joints and beer bars to white-linen restaurants.

These five Sacramento-area restaurants are creating dishes that have the chicken wing soaring to new heights.

Lou’s Sushi
Former chef Lou Valente may no longer be a part of his namesake midtown sushi restaurant, but his penchant for pushing the envelope remains. While Lou’s serves Miso Garlic Chicken Wings all the time, the superior Spicy Wings ($6) are available only on the happy-hour menu. Slightly crunchy on the outside and fall-off-the-bone tender on the inside, the wings come covered in green onions and a rust-colored sauce, with bright-red Asian spices spilling off the chicken and onto the plate. 2801 P St.; (916) 451-4700; lousushi.com

Pangaea Bier Cafe
Spicy foods tend to pair well with India Pale Ales; the hop-bomb bitterness of the beer makes a compelling counterpoint to the flavor-forward heat. This pioneering Curtis Park beer bar is known for its brews first and its award-winning burger second, but the Pangaea chefs also have a magical touch with chicken. Their Hot Wings ($10) come in two styles: classic Buffalo and sticky-sweet honey habanero, both of which pair beautifully with any of the bold IPAs on the Pangaea beer board. 2743 Franklin Blvd.; (916) 454-4942; pangaeabiercafe.com

Thai Spoon
The meaty Chicken Wings ($8.95) at this Thai restaurant in Natomas maintain a crunchy texture on the outside, even though they come dripping an orangey “house sauce” swimming with charred basil leaves and insidiously slow-building spices. That crunchiness makes the perfect complement to the juicy chicken, while the tart, tangy, spicy, sticky and sweet sauce will have you happily reaching for napkin after napkin. 3890 Truxel Road; (916) 575-9010; thaispoonnatomas.com

Grange
You won’t find Chicken Wings ($12) on the lunch or dinner menus at this upscale downtown restaurant. They are served only in the bar area, so you can ditch the formalwear and dig into these grilled wings coated with Calabrian chili oil, smothered in green onions and dipped in Shaft’s bleu ranch. Although the wings are complex, spicy and delicious, the ridiculously rich and creamy dipping sauce is the real draw, since the Roseville-based Shaft’s ages select Wisconsin blue cheese for at least one year. 926 J St.; (916) 492-4450; grangesacramento.com

Charlyne’s Rib Shack
Chicken wings generally come in two pieces: a one-boned “drumette” that resembles a mini-drumstick and a two-boned “wingette.” This family-owned barbecue restaurant serves full wings instead of pieces, and while the North Sacramento location may lack the elegant ambiance of Grange, the food is flat-out fantastic. Essentially a next-level version of KFC, the breaded and deep-fried Charlyne’s Chicken Wings ($10) are outrageously delicious. 3270 Northgate Blvd.; (916) 514-8984; charlynes.com