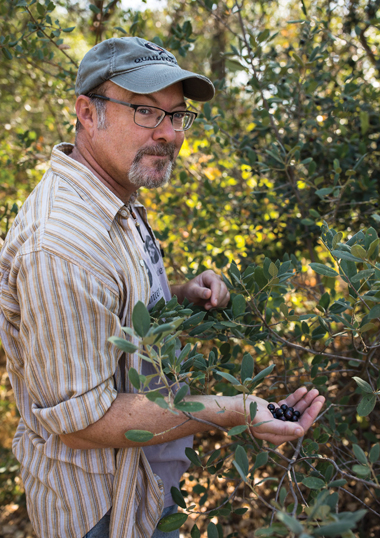 On a July afternoon in Roseville, local author Hank Shaw was drinking pilsner and chatting with Nixtaco’s co-owner, Patricio Wise, and his staff while a first-time patron contemplated the menu. Shaw recommended the pork al pastor and sweetbreads tacos. He seemed disappointed with this writer’s choice of a vegetarian taco. He ordered aguachile verde, made with raw shrimp, tomatillos and red onion marinated in lime, and a bowl of rice. His T-shirt said “Hunt Organic.”

Picture an unlikely hunter and he might look like Shaw. Besides eating, he likes to hunt, fish, forage, garden, cook and write about all of it. After lunch, Shaw mused that he’d want “writer and teacher” placed on his headstone, which is somewhat self-deprecating, but also a simple description of what he does and how he spends his time.

His is an immersive way of life.

Shaw’s motto could be “do it yourself and be yourself.” He has a graduate degree in African history and a diverse list of former occupations and pastimes—from Long Island fisherman to restaurant cook to long-distance runner. As a political reporter, he spent 19 years working around the country, including Sacramento and Stockton (for The Capitol Morning Report and The Record of Stockton), and he covered two presidential races. Now 47, he pursues and writes about wild food, like shad (fish), cardoons (similar to artichokes) and daylilies. Writing a good essay makes him happy. He prefers to completely master a subject, then teach others about it.

It was Shaw’s blog, Hunter Angler Gardener Cook, that initially caught the food world’s attention and hooked readers. He started blogging about 10 years ago, when he was still writing about politics. After nominating him twice, the James Beard Foundation handed Shaw the award for best individual food blog in 2013. A sampler from recent posts included catching rockfish, eating daylilies and making “Clif Bars” using amaranth and mesquite flour. His latest blog entry received 10,000 page views.

He first shared his impressive knowledge of wild food six years ago in cookbook form with the publication of “Hunt, Gather, Cook: Finding the Forgotten Feast.” “You don’t know if you’ll get a second chance [to publish the next one],” Shaw says, but he’s taken a few more successful shots at it.

His next book, “Duck, Duck, Goose,” came out in 2013, followed by “Buck, Buck, Moose” three years later, after a Kickstarter campaign provided funds for the initial printing. Despite their Dr. Seuss-like titles, the books, along with Shaw’s do-it-yourself machismo, hit the sweet spot with serious hunters and enthusiastic home cooks. Men in camouflage and hunting boots flock to Shaw’s book-related events. There’s usually some kind of food involved (Shaw helps plan the menus) and sometimes an organized hunt.

He prefers to use the word pursuit, instead of hunt, because it’s more accurate, and he acknowledges that hunting is not for everybody. He likes to know where his meat and seafood come from, so he gets animal protein straight from the source. As he explains on his blog: “Honest food is what I’m after. Nothing packaged, nothing in a box, nothing wrapped in plastic—unless I wrapped it in plastic myself. I eat meat, but I loathe industrial farming. So I’ve not bought meat or fish for our home more than a handful of times since 2005. If that makes me a meat hunter, so be it.”

Shaw doesn’t read passages from his books when he’s on tour. He seems uncomfortable with the idea, even though he could hold his own in a room full of top-notch essayists. Yes, his cookbooks contain essays. And, yes, even nonhunters and other writers appreciate and savor them. When he’s on tour, Shaw talks and tells stories to his audience. He has lots of stories.

He recalled that in Denver, he oohed and aahed over readers’ photos of their trophies. (It was elk season.) He understands the hunter’s customary display of jubilation and chest thumping; a lot of work and time go into a successful hunt. He also knows what it means to take a life. “Everyone who’s hunted long enough has looked in the eyes of a dying animal,” he says. One of his more powerful essays, “On Killing,” is a wrenching account of what it means to be a hunter and the responsibility that goes with it. Those are the kinds of essays that resonate with readers. It’s like “opening a vein” to write them, he says, painful yet effective.

He’s passionate about the ways people can maintain a connection to nature, what he refers to as the wild world. How do you do that? According to Shaw, you have to eat nature to stay connected to it. And the biggest mistake a hunter can make? Not to eat what you’ve killed.

When he’s at his home in Orangevale, he toggles between tasks. He listens to jazz and shuts off social media in order to write. But he’s on the road a good portion of the year, hunting, fishing, gathering and touring to peddle his books. (Hawaii is the only U.S. state he hasn’t visited.) For the “Buck, Buck, Moose” tour, he visited 41 states in seven months, including stops in cities where his readers asked him to show up, provided he could sell a certain number of books; he estimated he’d sold about 35,000 copies so far.

His core supporters live in the Pacific Northwest, the upper Midwest and Texas, but Shaw enjoys lots of local support as well. His readers are loyal, he says, and he believes that interacting with them makes him smarter. When he has a question about a recipe or an ingredient, he posts it on his Facebook page, Hunt Gather Cook, which has more than 10,000 members. (You have to be approved by Shaw or another administrator to join.) Once he’s tried a recipe a few times, he sends it to readers for further testing before it makes the cookbook cut.

That Facebook page is a bridge between two worlds: urban and rural. It’s a place where liberals and conservatives come together and discuss wild food, he says. Members share information without fear of judgment or bullying. As long as hunters eat what they kill, Shaw doesn’t judge them. He has no problem deleting offensive comments. “It’s my house,” he says.

Shaw’s writing has appeared in the magazines Food & Wine and Field & Stream, and he’s been featured on TV’s “Bizarre Foods America” and “MeatEater.” A contributor to public radio’s “The Splendid Table,” he recently recorded a segment on preparing and eating daylilies. He’s become something of a go-to source for all things daylily.

Shaw could have ended up as the host of a television show titled “Wild Dinner Parties: A Magical Feast.” The premise was to teach D-list celebrities how to forage for food, then turn that food into a feast. The pilot didn’t attract a lot of attention, he says, rolling his eyes. He hasn’t ruled out developing another show, but it has to be on his terms.

Right now, he’s working on the final book in his triple-noun cookbook trilogy, which will be released next spring on April 1. Titled “Pheasant, Quail, Cottontail,” it’s a primer for preparing and cooking all manner of fowl and rabbits as well as other small game like muskrats, beavers, woodchucks, possum and raccoons. As with his last book, Shaw will self-publish “Pheasant, Quail, Cottontail” through his company, H&H Books, formed with his girlfriend, photographer Holly Heyser. He’ll do it without help from Kickstarter this time. Besides the United States, it will be available in New Zealand, Australia, the U.K. and Canada.

Heyser shoots the sometimes-stark photos in Shaw’s books, while he takes the photographs that appear on Instagram. He maintains his own social media accounts—he doesn’t have a publicist—and frequently interacts with his readers online. “I’ve had people say to me, ‘I can’t believe you answered my question,’” he says. “I try to answer every question I’m asked.” He doesn’t have advertisers and refuses to endorse products unless he likes and uses them. “The world is desperate for honest brokers,” he says, referring to the current political climate.

Shaw and Heyser are both hunters. Heyser is also the editor of California Waterfowl Magazine. Earlier this year, she created a YouTube series called “Hanksperiments” featuring Shaw and what she calls his “weird” experiments with food. The videos show Shaw in their kitchen making “pig jello” (pork broth), separating wheat from chaff on the porch and whizzing up anchovies in a food processor. He doesn’t take himself too seriously, which could partially explain his appeal.

He’s been fishing since he was 4 years old, but he didn’t start hunting until he was in his early 30s. He’s one of a growing group of adults learning to hunt later in life. “People are taking more control of what they’re feeding themselves and their families,” he says.

Not much that is edible is off Shaw’s table—he doesn’t eat mountain lions or coyotes—and he’s not terribly squeamish. The strangest thing he’s tried is a mopane worm (“I get this question all the time,” he says), considered a delicacy in parts of Africa. It looked like a mozzarella stick and came with piri piri sauce, but the worm had the consistency of a “booger.” He recalled that he’d tried stink bugs (another delicacy) at Nixtaco’s Christmas party. They tasted like citrus.

Even though he hasn’t finished the current book, he’s already thinking about the next one: a foraging guide or a book of foodrelated essays. For October, he anticipates hunting prairie chickens and mule deer in South Dakota. And it will be duck hunting season in California. But for now, he was headed to Raley’s for some ingredients to prepare tonight’s dinner: salmon with avocado salsa. He was keeping it light because he’d had a big lunch.