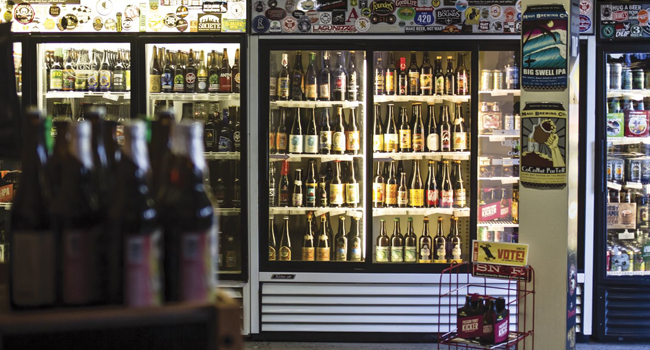 For almost a decade, Sacramento beer connoisseurs have enjoyed Pangaea Bier Cafe’s 28 ever-changing taps of global craft brews, with six devoted to sours. Five years ago, Pangaea added a bottle shop next door, where you can imagine yourself in an old-style European market. Like the cafe, it has a cozy, small-town charm to it. You can grab bottles to go or drink your purchase at a table for a small corkage fee. The focus is on Belgian and Belgian-style beer. There’s also a healthy variety of sours, wild ales, Trappist beers, IPAs, German lagers and barrel-aged brews. 2743 Franklin Blvd.; (916) 454-4942; pangaeabiercafe.com

From the outside, Curtis Park Market looks like just another ordinary corner market. But don’t let the unexciting exterior fool you: This is craft-beer heaven. The treasure trove is tucked away in the back, with aisles of obscure single bottles with funny brand names like Silly Sour Ale and strange blends like an imperial stout aged in coffee, vanilla beans and chili peppers. The beer is organized by style, which includes craft standards like IPAs, stouts and porters, along with more obscure varietals like saisons, lambics and abbey ales. There’s a “new release” shelf, much like in a record shop, for ravenous beer drinkers on the prowl for something new and adventurous. The wine, cider and spirits selections are nothing to scoff at, either. 2703 24th St.; (916) 456-6488; facebook.com/curtisparkmarket

Is it a laid-back neighborhood bar or a downtown bottle shop stocked with nearly 700 distinct craft beers? Actually, it’s both. You can grab a table and order something from one of the 23 taps, which usually change every couple of days, and relax the day away. For a real treat, order a flight, which is a small sampling of four different brews. There’s a new flight every day, and the beer comes from the store’s vast bottle collection, not the taps, and is built around themes like seasonal IPAs or local brews. Like the taps, the bottles are always changing and are from craft breweries of all sizes from all over the world. 211 G St., Davis; (530) 756- 5212; facebook.com/thedavisbeershoppe Beer me: At Capitol Beer and Tap Room, you can sit and drink or bring home a bottle. Or two. Or three . . .

Located in a suburban-ish retail complex in the Howe-Fair Oaks area, this place is half beer bar, half bottle shop. Modeled after Portland’s famed Belmont Station, it has 20 rotating taps (including an English-style cask ale setup), plus another 350 to 400 bottles for sale in the adjoining retail space. The focus is on American and California craft beers, including brews from hometown favorites Device, Track 7, Mraz, Bike Dog and Auburn Alehouse. Owner Kenny Hotchkiss travels to pick up beer from out-of-town breweries that don’t have a distributor here, like San Diego’s Council Brewing Co. Hardcore beer geeks are drawn by the constantly changing inventory, which gives them lots of material to brag about on sites such as RankBeer.com and Untappd. “We have more check-ins on Untappd than anybody within 50 miles,” says Hotchkiss. Food isn’t served here, but you can bring in your own, and those options are set to expand with the rumored upcoming openings of Buckhorn BBQ and Zocalo nearby. 2222 Fair Oaks Blvd.; (916) 922-1745; capitolbeer.com

In 2012, Oregon transplants Amy and Kyle Ruthnick opened Final Gravity in East Roseville with 26 rotating handles and 500 bottles to take home or consume on the premises. (No corkage fee!) Last November, they opened a second location in Auburn with 20 taps and 300 bottles. The pair split the ordering duties, with Amy handling Auburn, Kyle and the store manager overseeing Roseville, so each shop has its own unique lineup of brews. They offer flights and “sippy samples” that allow you to taste before committing to a full pint. Final Gravity is known for its special events, such as Mother Pucker, an all-sour tap takeover in May, and December’s Stouterday, when all 26 Roseville taps are filled with special barrel-aged and imperial stouts and porters set aside by the Ruthnicks throughout the year. Food is limited to a help-yourself bowl of pretzels, but you can order in from nearby fast food joints. 9205 Sierra College Blvd., Roseville; (916) 782-1166; 1850 Grass Valley Highway, Auburn; (539) 889-2175; finalgravitybeer.com