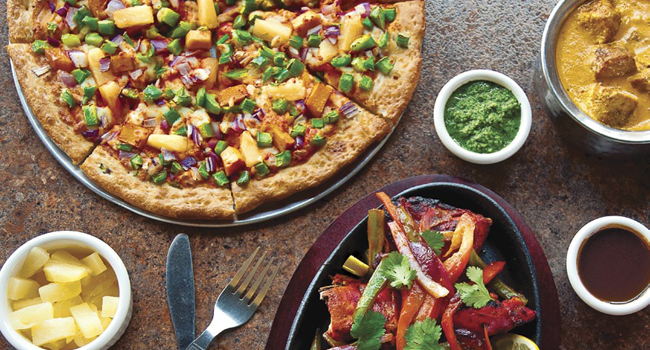 Fusion cuisine has come a long way from Wolfgang Puck’s Chinois, or even from the Korean-Mexican food trucks that dominated the dining scene in the late aughts. With galbi now nearly as common a taco topping as al pastor, chefs and restaurateurs are scrambling to put out the next hot cultural and culinary mashup.

But having lived in LA at the height of Kogi mania, when I endured hourlong lines to enjoy a kimchee quesadilla, I feel a not inconsiderable amount of fusion fatigue. Criticized for being trendy, unoriginal and inauthentic, fusion food can be a lazy gimmick and, at worst, a degradation of the culinary cultures from which it pulls. With that in mind, I’ve been reluctant to get my hopes up about new fusion trends.

That is until I heard the words “Indian pizza.” Being a bit of a pizza maniac, and also a committed fan of anything curried, I found my resistance to fusion food crumbling. Despite my fear that this would be another sushirrito situation (in other words, putting together two of the world’s best foods and creating an unmanageable, over-sauced monster), I nevertheless chose to go against my better judgment and made the trek to 1st Choice Pizza & Curry.

Situated in a nondescript strip mall in Elk Grove, 1st Choice is unremarkable looking. With its sterile, blandly pleasant interior, it can be mistaken for a generic pizza parlor. But that would be a regrettable snap judgment.

While the menu offers both traditional pizzas and classic Indian dishes (think pepperoni pizza and chicken biryani), the heavy hitters of the menu are the fusion pizzas. The butter chicken pizza, topped with curry rather than tomato sauce, is a tasty cacophony of spice and color. The mango tango pizza, made with spiced mangos and mango curry, is like a grown-up version of a classic Hawaiian. And the malai paneer pizza, with its toppings of cilantro, chilies and chunky spiced cheese curds, could make even a pizza traditionalist forget all about mozzarella with just one bite. Naan is also available, but the fluffy pizza dough meets the same needs.

If you’re craving a delicate Neapolitan pizza, 1st Choice shouldn’t be your first choice. But if you can handle a little bit of gimmickry—there’s no denying the gimmickry here—as well as quite a lot of spice, then Indian-Italian food is a welcome change of scenery. While I don’t predict that pepperoni tandoori will be the next huge food trend, it’s a welcome relief from yet another Korean-Mexican joint. Turns out replacing tomato sauce with curry is a form of fusion I can endorse. 9308 Elk Grove Blvd., Elk Grove; (916) 478-4444; 1stchoicepizza.com