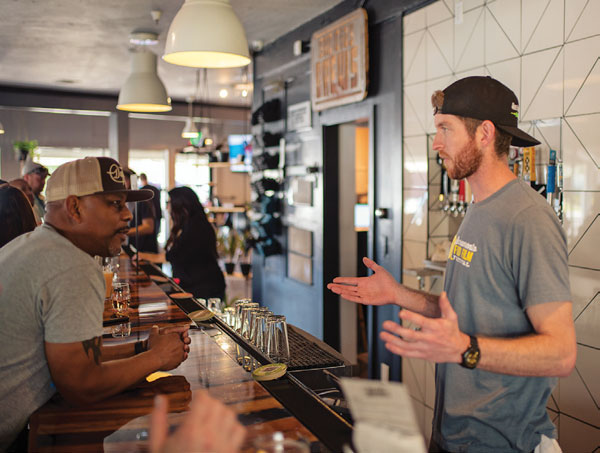 If you’re having trouble keeping up with the scores of breweries and taprooms opening in and around Sacramento, you’re not alone. 2018 is already shaping up to be a bountiful one for the region’s beer lovers:

Chalk it up to word of mouth: The folks behind Sac City Brews in Tahoe Park were welcoming throngs of eager customers in January even before officially announcing their opening on social media. This taproom is all about neighbors—and their kids and dogs—gathering in a relaxed setting. A sizable shaded patio lines the perimeter of the taproom, which serves food that’s decidedly more sophisticated than your typical pub fare and pairs perfectly with the selection of local beers on tap.

Erik Schmid, whose three Brewmeister shops supply home and professional brewers with equipment and ingredients, has launched his own brewery in Folsom. Red Bus Brewing Company takes its name from a ’68 Volkswagen bus that Schmid loves driving around town. Schmid brews small batches of a wide variety of beers and has food trucks on-site on busy evenings. “It’s a warehouse brewery similar to Track 7,” he explains. “We’re going for a light and fun vibe.”

The team behind Brü Co. near Ninth and K in downtown Sacramento plans to deliver 24 craft beers on tap from breweries across California as well as “farm-to-fork bistro fare” that’s “beer friendly but not like traditional bar food, nothing fried,” according to co-owner Justin MacClanahan. The 2,000-square-foot taproom is light and bright and includes outdoor seating. “My wife Jennifer and I met in Washington, D.C., and we’ve always talked about how other cosmopolitan cities have so much to do,” he says. “That’s what we want to bring to downtown Sacramento.”

Device Brewing Company is launching not one but two new taprooms, the first one in midtown’s Ice Blocks complex and another slated to open later this year in the city’s Pocket neighborhood, where owners Ken and Melissa Anthony reside. Neither location will serve food, but Ken says they plan to partner with nearby eateries at both locations to provide noshes to their patrons. The midtown tasting room includes communal and individual seating as well as patio space. The spacious Pocket location is intended to cater to everyone from “parents looking to get out of the house with their kids on a Saturday to the person looking to answer a few emails while enjoying a beer after work,” says Ken.

The owners of Hop Gardens in the Curtis Park neighborhood have transformed a former coffee shop into a handsome taproom that will offer wood-fired pizza and beer from 24 taps. “We wanted to bring pizza, craft beer and families together,” says co-owner Jeannine Hawkins.