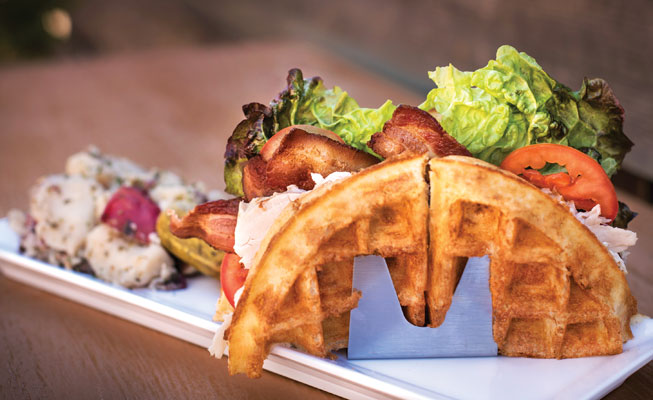 Der Biergarten owner Sean Derfield says it was a waffle sandwich he ate years ago in Southern California that inspired him to bring something similar to his midtown establishment. Kitchen manager David Bradt uses a special savory batter for the Belgian waffles that take the place of bread in their Belgie sandwiches. For the Belgie Cristo, Bradt stacks the waffles with turkey and ham along with cream cheese, a smoky raspberry-chipotle sauce and all the fixings. The Belgie Bird, a fan favorite, includes turkey, bacon, avocado and a house-made “secret garlic sauce,” along with lettuce and tomato. Derfield says customers “are getting used to the idea of a sandwich made with waffles” and that once they try it, they’re hooked. “We’ve had nothing but positive feedback.” 2332 K St.; beergardensacramento.com

Plenty of joints make a tasty breakfast sandwich, but nothing compares to the gargantuan Fork & Knife version served at Ink Eats and Drinks. The name is the first hint that this is a beast to be reckoned with: Country fried steak, bacon, two fried eggs and American cheese are piled inside a house-made jalapeño-cheddar biscuit and smothered in sausage gravy. “We have to stick a knife through the top of it so it doesn’t topple over,” says manager Carol Villegas. “It’s one of our best sellers. Customers love the flavor of each individual ingredient but also how it all comes together.” 2730 N St.; inkeats.com

The Rind took second place in last year’s Sacramento Grilled Cheese Festival for its doughnut grilled cheese, a one-off that owner Sara Arbabian says she hopes to offer in her midtown restaurant someday. Marie’s glazed doughnuts (made without the hole) are the stars of this hedonist’s dream of a sandwich. The doughnuts are sliced in half and turned inside out, then layered with Point Reyes Toma cheese, a jalapeño-parsnip puree and sliced Fuji apples soaked in lemon-thyme water. “People were really impressed with how novel it was,” says Arbabian, who has hesitated to put the sandwich on her regular menu. “I’m worried it will be so popular that we’ll run out all the time and people will be upset.” 1801 L St.; therindsacramento.com