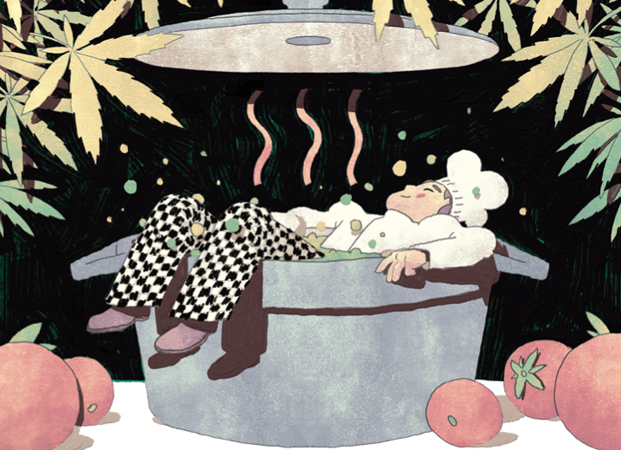 Warning: I’m from a generation that’s smoked pot (sorry, weed) for so many decades we created the modern necessity for teeth whitening. Marijuana-infused brownies were our first college course. Today, nothing makes you forget the hay you spit out from your fi rst dorm batch like a big, chartreuse block of cannabutter. It’s just one of the many culinary delights in the increasingly sophisticated world of edibles.

“Edible” is the code word for food made with marijuana. It’s also a perfectly accurate term for enchilada, which also is edible. Do not be fooled by a magazine called edible Sacramento. It is of the enchilada-is-edible genre and so far has never run a threehour recipe for basic cannabutter.

Cooking with cannabis isn’t easy. Your marinara sauce may be technically perfect, but there’s no mistaking it tastes like marijuana and has the lingering grit of a sidewalk. Certain steps were omitted, if only you’d known about them.

Not to get too wonky, but overdosing is the biggest mistake made by beginners. The same strain of pot might have various potencies. one type of cannabinoid might induce mindfulness, while another could make you buy a bouncy house. Anyone who eats weeded food on an empty stomach will get high first.

None of this matters to the professionals on the set of the Viceland TV show “Bong Appetit.” It is the best example of how tricky kush cooking is. Slick production, crazy show ideas, lab revelations, cheffie tricks—all make this show so fixating that it was nominated for a James Beard award.

Half the on-air crew is a fl eet of pro chefs or home cooks. The other half is a gang of ganja geniuses who function as chemists. The cooks use marijuana tinctures, extracts, terpenes and dozens of strains of haute weed to create dishes like Pakistani pot pakoras and weed-infused pizza. Their goal: to mask the taste of marijuana in an otherwise fine-dining experience.

The show’s host is Abdullah Saeed, a curious, stoned and happy millennial-something working with his two loves: food and marijuana. on his blog, he calls himself a post 9/11 American Muslim. He reverses the Jesse Jackson identity formulation, subordinating religion to nationality. He says he’s not religious. Obviously. He has broken nearly every Koranic law forbidding drinking, smoking and gambling. He smokes weed every day. He takes huge inhalations from bongs and blunts on air.

On one show, the theme was fi ne dining. It ended with panna cotta enhanced with a tincture of lemony terpene—the fragrant oil that gives cannabis its aroma—dispensed by an eye dropper. on another, Saeed celebrated his birthday with a Bedouin-themed dinner starring a roasted chicken stuff ed with cannabis buds the size of thumbs. By the time the show’s professionals worked out the dosing, the kitchen was in a haze and everyone was stoned.

So far, the only big name from the food world to crash this party is ex-con and opportunist Martha Stewart. With her buddy Snoop Dog, she stars in “Martha & Snoop’s Potluck Dinner Party” on VH1. Celebrity guests like Seth Rogan, Wiz Kalifa and 50 Cent drop by for what’s billed as a “half-baked evening of cocktails, cooking, conversation and fun where nothing is off limits.”

Now that recreatIonal marijuana is about to be legal in California, what’s next? Restaurants that specialize in edibles (see enchiladas, above) and food infused with marijuana are the next frontier. It might take a while to catch on in Sacramento, where, in the 1970s, the chef of a sandwich shop had to fight city hall so customers could legally drink coff ee on the sidewalk under an umbrella.

Sometimes we are rolled a bit too tightly, but try this edible fantasy.

Here’s the scene. We arrive by alternative transportation. except for the resiny aroma with hints of lemon coming from the kitchen (could it be Blue Dream?), it seems like a normal restaurant.

Hostess: “Do you have a reservation?”

Hostess: “Did you bring your marijuana licenses with you?”

The empty restaurant challenges the hostess to award us a table. We are unable to chat up the crew in the open kitchen. The chefs are freaking out because the staff is late roasting the marijuana at 240 degrees for 40 minutes to activate the THC.

The head chef, so to speak, is less concerned with bragging about vendors than budtenders.

And the kitchen has become a laboratory of calculations for parsing strains and dosing. Not that this is new. At any restaurant with a menu that changes daily, you’re paying for a laboratory experiment.

As we’re seated, we’re immediately asked to order an appetizer. Options will be packed with weed with the fastest-acting cannabinoids.

Us, speaking Portlandish: “Is it local?”

Looking at possibly an hour before we’ll know how to proceed, we order Green Goddess Dip made with mayonnaise and bread with lots of hash butter. Fats infuse THC best.

Now we wait. To kill time, it would be wrong to order a krafty kush cocktail. Alcohol might make us paranoid.

A cannabis restaurant, were it to exist here, would have pros and cons for both diner and owner. We already know the chefs will literally be in the weeds all night. Customers would need a ride home. And we’d be there for a long time.

The owner knows this, too. The tables may not turn even once. And without alcohol sales, these could be the highest prices in town to cover the costs of the magic ingredients in the food.

On the bright side for the crew, customers in a heightened state of consciousness complain less.

We end the evening on a high note. We order a stunning strawberry gelato infused with an energizing Berry Haze sativa.

A member of our party, a guy with the misfortune of being large, had taken longer to get suffi ciently high and had not reached that heightened state of consciousness as quickly as a smaller person. He wanted to send his back.