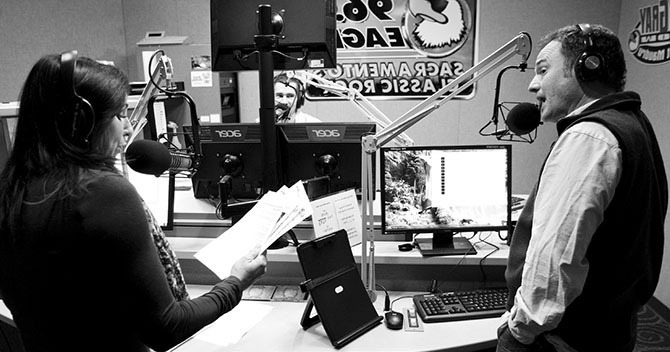 This past October, after spending 25 years at KCRA, 3 first as sports director, later as news anchor, Walt Gray got out from in front of the TV camera to take his place behind a radio microphone as host of “The Walt Gray Show” at KSEG The Eagle 96.9 FM. The show, co-hosted by longtime Eagle on-air personality Kat Maudru, airs weekday mornings 5:30 to 10. We recently caught up with the award-wining journalist to talk about his transition back to radio, his supercushy schedule and how you can take the man out of the newsroom, but you can’t take the newsroom out of the man.

How it all went down: Gray didn’t have immediate intentions to leave KCRA when the folks at Entercom Radio, which owns The Eagle, approached him to host a morning show. The station had been airing the syndicated “Mark & Brian” radio show based out of Los Angeles, but the show came to an end with the retirement of co-host Mark Thompson. “Our goal is to combine music and local content, neither of which was on this radio station for many years because the ‘Mark & Brian’ show was based in L.A.,” Gray says. “They were talkdriven, and it was mostly L.A. stuff and interviews with actors. So what we are doing is playing music again and talking about Sacramento and having fun.”

But switching to radio was in the long-range game plan. “This was always my goal: to leave television and go to a radio show and have fun,” says Gray. “The goal was for a couple of years from now, but the opportunity presented itself earlier than my blueprint. It just seemed to me that after doing serious TV news for the last 20 years that it would be a lot of fun—a way to show some personality and come to work every day and not deal with any serious issues

He’s been behind the radio microphone before. Gray started in radio at a station in his native Rhode Island, “queueing up records” and listening to the “Associated Press ticker in the background.” “It was a summer beach community,” says Gray, “and it was my mom’s hometown, so my grandparents would listen every day.”

Déjà vu. Gray hosted the “Morning Sports Page” from 1991 to 1996 on The Eagle. “That helped me feel comfortable coming over here and leaving where I was. It wasn’t like I was a new character in this play, and I think that is something the bosses here were interested in—bringing in a familiar person.”

He’s known his “work wife,” Kat, for years. “It’s unusual that a new show would have two people thrown together that have known each other for 20 years,” says Gray.

A 3:30 a.m. wakeup call? That’s nothin’! “I spent 15 years, eight months and six days at KCRA doing morning newscasts. This was my third time on a morning newscast, so I knew what it would be like, and I am totally fine with it. Totally fine with it. It’s fun coming in at 4:30 a.m. and Chris (Rice, the show’s producer) makes a good cup of coffee and Kat brings in a baked good and we have our own little breakfast. We still prepare for the show but it’s not as involved as a TV newscast.”

He can ditch the eyeliner. “Literally, I can get out of bed and come here. It’s radio. It’s a lot different than getting ready for KCRA. Here, I am not using eyeliner or concealer or hair products. If I want to shave, I shave. If I don’t, I don’t. All I need here is coffee and I’m good.”

He provides listeners a safe place to call. “Listeners are friends, not adversaries. We’re not here to kill people,” says Gray, alluding to other radio programs where getting into combat with callers is part of the shtick.

Goodwill loves him. So what did Gray do with all of his “television clothes” once he left KCRA? “I took a bunch of my suits and ties to Goodwill, and it felt cathartic.” These days, you’ll find Gray wearing T-shirts, long-sleeve button-ups, jeans and loafers as part of his work attire.

He can turn it on when he has to. When Gray found out that the Raley’s strike ended this past November, he was the first to break the story, proving there’s still a little bit of news hound in him.

He wishes Sting would drop by for a visit. “Just for my partner, Kat,” he says. “We had his guitarist, Andy Summers, on the show (via phone) and Kat got all sweaty just having this guy on the show, but if we could get Sting to come out, that would be bueno.”

He felt the love from KCRA. “They were very, very generous when I left in terms of doing stories and letting everyone know that I wasn’t leaving in a box,” Gray says. “The last few days at the job were very emotional for me. Being there for 25 years and leaving friends and a job that I really enjoyed, that was tough.”

He felt the love from viewers. “The last two or three weeks [at KCRA], I would get off the air and my voicemail would be full of people recounting a story that was done or my meeting one of their children,” Gray says. “I was a time stamp in their lives. That stuff floored me. People were warm and sincere and very pleasant. It made me feel good, and it made me feel sad.”

He still rides. A longtime motorcycle enthusiast, Gray is host of the annual Walt Gray Ride. Through the rides, Gray has helped raise half a million dollars for local children’s charities in the past 10 years. Why children’s charities? “Motorcyclists have a real soft spot for kids. I have three little ones, so it all seemed to come together.” The Eagle Walt Gray Ride for Make-A-Wish takes place this year on Aug. 18.

He played hoops in college. “In a perfect world, I would run full court basketball two days a week,” Gray says, conceding, “If I could get back to a personal trainer, my body would appreciate that.”

He’ll hook you up at your next kid party. “I bring a flask to kids’ birthday parties for the other adults to mix it in with the fruit punch. People come up to me, saying, ‘I could use a drink,’ and I say, ‘You’re asking the right guy; let’s go over to the corner.’ My flask is famous for appearing at different functions.”

He’s spent time in the pokey. Gray admits to being arrested—twice—for minor infractions when he was a teenager. The first time was for shoplifting at the supermarket. “A box of frozen fried chicken somehow found its way into my pants,” he says. The second time was for dining and dashing with friends. “We found ourselves running out of a restaurant and somehow had forgotten to pay the bill.” Gray and friends were pulled over at a road stop 10 miles up the road in rural New Hampshire.

A typical Sunday: “Church at 9:30 a.m., going to the grocery store to food shop, maybe a family bike ride from Land Park to Old Sac, lunch at Joe’s Crab Shack, maybe sneak in a trip to the gym.”

Opposites make it work. Gray’s morning schedule is the opposite of his wife’s, News10 meteorologist Monica Woods, who works 2 p.m. to midnight. But the two come together for lunch, dinner and to put the kids to bed. “At one point, we had three kids ages 4 and younger, and we were both working mornings and I was like, ‘Oh, my gosh, how do we keep this together?’ That was our circus time.”

Mr. Mom. Gray’s new schedule allows him to pick up his kids—Abby, 10, Kelly, 7, and Joseph, 6—from school every day, shuffle them to various activities and attend their events. “There’s very little I miss with this job.”

He’s happy in Sac. Early in his career, Gray mused about moving to Boston, New York, Philly. “But it didn’t work out, and I’m glad it didn’t.”

Final thoughts: “I loved my job at KCRA and it was hard to leave, and the only thing that could make me leave was this.”