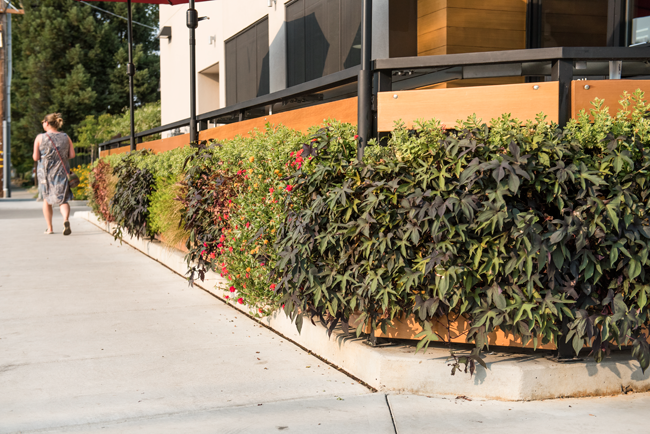 An arresting architectural feature recently appeared at the corner of Folsom and 48th in East Sacramento: a “living fence” made entirely of plants.

According to Cima, living or “green” walls and fences are popular in the Bay Area and Los Angeles but are just starting to appear here in Sac. Two years ago, downtown’s Golden 1 Center debuted with seven exterior green walls planted with 5,400 plants.

To create Origami’s fence, Cima Landscape stuffed cylindrical drainage sacs with soil and speared each one onto a metal pole like a hot dog on a stick. Workers mounted the poles like pickets onto horizontal rails, cut slits into the sacs with a razor and filled the slits with plants, mostly succulents and drought-tolerant perennials.

A living wall or fence has many benefits, says Cima. It attracts butterflies, bees and birds, filters out noise and dust and softens the urban landscape. Another plus:  It requires very little weeding.