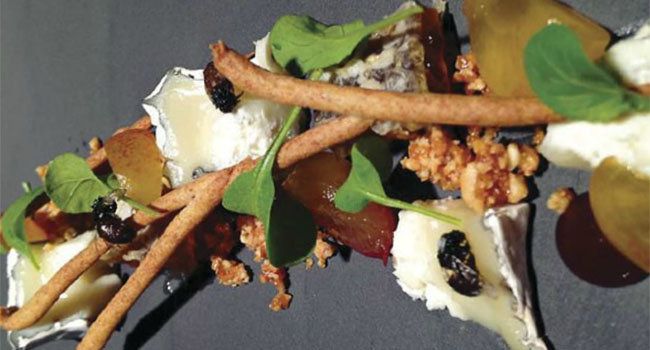 THE BACK STORY
It all began with a chunk of honeycomb Bruich’s sous chef, Tyler Bond, brought into the kitchen one day along with a batch of honey from a local farmer. The honeycomb came with hangers-on: more than 100 bees still living in its waxy cells. It was placed in a covered plastic container for a few days until the bees died off. Enotria pastry chef Edward Martinez helped concoct a plan to coat the bees in caramelized sugar (once the stingers were removed), then lightly fry them for use as an edible garnish for a cheese course made expressly for visiting chef Kevin O’Connor of Sacramento’s Blackbird Kitchen + Bar.

DID THEY TASTE LIKE CHICKEN?
Bruich was pleased with the result, likening the bees to candied peanuts but with a slight popcorn taste. “People think it’s crazy or it’s silly or it’s funny, but really the dish was about the honeycomb. The honeycomb was just a beautiful product, and the bees were a product of that,” he says. O’Connor, who dined at Enotria with his girlfriend in early June, was clearly wowed both by the playfulness of the idea and the outcome. Just a handful of the bees—coated lightly enough to still look like bees—were placed on the plate along with honeycomb, Cypress Grove Humboldt Fog goat cheese, arugula, pickled cherries and a few rye breadsticks perched like little branches. “It wasn’t a huge flavor on the dish, but it looked amazing,” says O’Connor, who admits he wishes he’d thought of the idea first in his own kitchen. “It lent another texture, a bit of a crunch.”

OTHER SPECIES UP NEXT?
Not so fast, says Bruich, who insists he’s not looking for a novelty item. The dish came together organically, he says, and also played off of Bond’s love of foraging. That said, candied bees just may make their way onto the regular menu eventually once the cheese course is perfected, he says