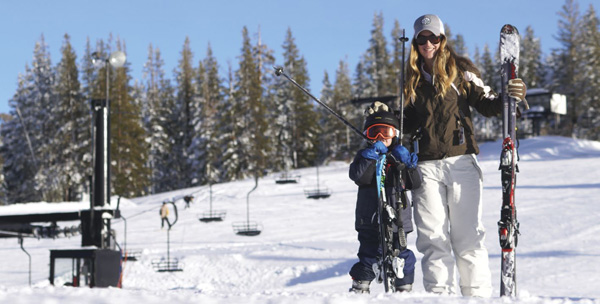 From the time he could walk, he could climb. From the time he could climb, he climbed as high as he could go. He didn’t have that first-born cautiousness thing I had heard about. He never went through a separation anxiety phase, never shied away from a stranger at the grocery store or the big kids at the park. He was daring from the beginning, fearless and resourceful in his never-ending pursuit of adventure. Our neighbor nicknamed him Evel Knievel, and it fit.

I, on the other hand, tend to be risk averse, a natural planner incapable of overlooking the worst-case scenario in many situations. In my son’s first years, this meant I was always warning him about the potential pitfalls of his thrill-seeking behavior, constantly rushing after him to grab him down from whatever apparatus he was scaling and generally trying to avoid the emergency room. It was exhausting (for both of us, I imagine).

Then I remembered when my dad taught me how to ski when I was about 6 years old. He started by tying a rope—an actual hardware store rope—around my waist and taking me down the bunny hill at Boreal like a person takes a dog for a walk. After I graduated from the rope and got to take a few runs untethered, I excitedly recounted the thrill to him on the chairlift ride back to the top.

“The uh-oh feeling is what you pay the money for,” my dad responded with a chuckle. It probably made sense for an adult skier—someone paying money to literally careen down the side of a mountain—but of course it didn’t make any sense to me at the time.

Nevertheless, I understood that there was an uh-oh feeling. I felt it that day on the bunny hill. I felt it when I had to give a presentation in front of my class. I felt it when I was about to get caught in a lie or when I tried to rollerblade down the hill my grandparents lived on. Uh-oh. I might get hurt here, or embarrassed, or in trouble, or worse.

My little thrill seeker is finally old enough for ski lessons himself now, and amid all the instruction to bend his knees and make a “pizza” with his ski tips and keep his arms in front of himself, I know in my gut that the bigger lesson is about uh-oh feelings. The only way he’ll ever learn his own limits is if I let him reach them and recognize them on his own.

I do my best to send him out prepared: Long underwear and puffy snow clothes and a fancy helmet with integrated goggles. Right between my legs at first as I guide him into big S-shaped turns, but then I let him go, to test it out outside of my reach, and all that that means.

Like many parts of parenting, it’s rife with uh-oh feelings for both of us. As I watch him learn his limits, I think about my own. I remind myself that sometimes these feelings are our inner compass and we have to trust them. But sometimes, it’s better to quiet them for a moment. I quiet them when I want to rescue him at the park, because I believe that it’s good for him to get to his own fear sometimes, instead of just mine. Maybe that sounds reckless, but it also feels brave.

It’s funny how it works out that way—that in my desire to raise kids who are brave, I have to find my own bravery first. This mothering business rarely feels easy or safe. It’s risky and hard and demands that we rise to the occasion, over and over again. Every morning I equip myself with the metaphorical long underwear and helmet and goggles, but then I head down the mountain, knowing that there’s no way to be fully prepared. As I learn when to listen and when to try anyway, I become a better version of myself. Sometimes, the uh-oh feeling is what you pay the money for.