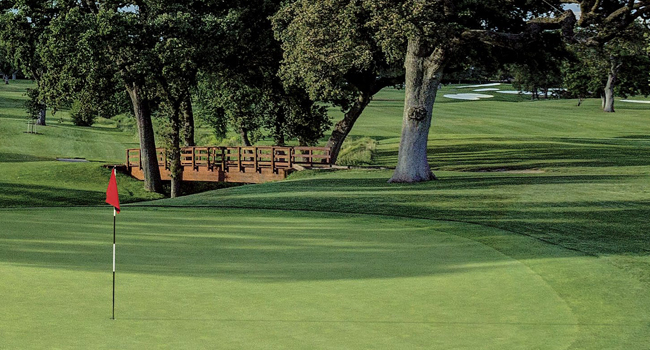 “We’re incredibly proud to have had our golf course chosen,” says tournament general chairman Dan Spector, “but we are equally excited at the prospect of the televised world stage for our community.”

Here are some fast facts.

Tickets already have been purchased by spectators from 35 states, and some 140,000 people will fill the galleries throughout the week. Ticket options include four-packs, weeklongs and special group packages. Kids 17 and younger get in free. Purchase through 2015ussenioropen.com.

The tournament could well be won or lost on the final few holes. Imagines Spector: “On the demanding 16th hole, a 285-yard drive will invite a 210-yard shot with 200 yards of carry to a green tilted back to front.

“Next, the player will encounter the 225-yard 17th hole, a par 3 that traverses the same lake the golfer attempted to avoid on 16. The tee shot requires at least 200 yards of carry to a well-bunkered green.

“Lastly, the golfer arrives on the 18th tee, a 468-yard par 4. The golfer must thread his right-to-left tee shot to a 25-yard-wide fairway, bound by bunkers on the left and rough on the right. A bending 285-yard drive will result in a 185-yard approach to a green sloping from the back. The green stands approximately 25 feet higher than the fairway and drops into Chicken Ranch Slough.”

Sacramento PGA TOUR player Kevin Sutherland plays a lot of golf at Del Paso throughout the year. He says, “Unlike other sports where you play a lot of home games, as a golfer this is the first time I will have a home field advantage!”

One hundred and fifty-six of the world’s best professionals and amateurs in senior men’s golf will vie for the championship; each player must be 50 years old by opening day. Those expected to attend include Fred Couples, Davis Love III, Fred Funk, Tom Lehman, Vijay Singh and Tom Watson. In addition, exempt players and former champions Colin Montgomerie, Bernhard Langer, Peter Jacobsen and Hale Irwin will play.

You never know who might show up at a golf tournament, but watch for athletes, movie stars and our local movers and shakers.

This will be the first USGA championship at which the USGA has sanctioned a host club to use the tournament to benefit a singular local charity: The First Tee of Greater Sacramento. The First Tee movement has its roots in Sacramento through Sacramento Area Youth Golf (SAY-Golf), which became the pilot program for the charity and has attained international status.

Top of the Leaderboard

Del Paso head golf professional Mike Green, PGA, says that length off the tee will be a key advantage to winning the tournament. His list of players to watch includes local favorite Sutherland, Couples, Singh, Love III, Miguel Angel Jimenez, Kenny Perry, Langer and Montgomerie. He adds that Michael Allen has played the course several times and could also be a contender.