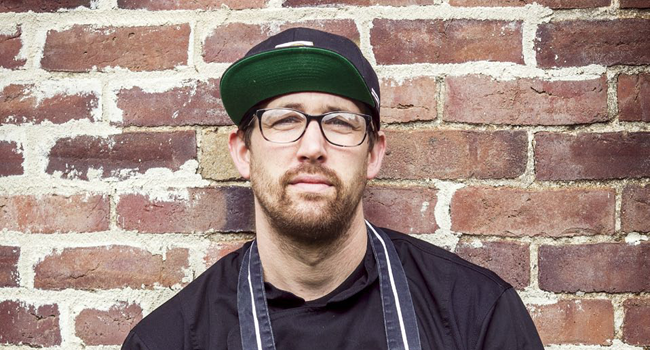 Tyler Bond, 34, chef de cuisine at Kru and the charismatic founder of Freaks of the Industry, a series of raucous pop-up dinners by and for the restaurant industry, dishes on kitchen misfits, the wonders of nature, and the hidden talents of dishwashers.

A CHILDHOOD ON THE GO:

“We moved around a lot. I lived in more places than I was years old up until my 20s. But we always had a garden. It was a big deal for my mom. She was kind of a hippie, and she liked making home feel like home for us. So I grew up eating tomatoes and cucumbers and peppers that we picked ourselves. I always had vegetable stands as a kid so I could make money for Christmas.”

“Moving a lot meant I was forced to make friends all the time, and that I’m not scared to travel. As far as food goes, I would change jobs every year and a half because I wanted to experience different cuisines. I traveled all over the world cooking—to Alaska, Mexico, Kenya, Thailand. I think to be forced as a kid to move helped me to be OK moving later in life.”

THE BIRTH OF FREAKS:

“It started off as a celebration of the [restaurant] community and the freaks that are in it. That could be farmers, delivery guys—it could be anybody, really. The back of the house is typically made up of misfits and wild-brained people and addicts. They’re a less presentable breed, but they are just as talented as any component of a successful restaurant. I wanted to celebrate that.

“To be part of a Freaks event, you don’t have to be completely bonkers. You can just come and have fun. I like people who have a creative mind, who are bold and opinionated and sensitive, because that’s who I am. If you want to do a dish for our events, you have to have a vision. And you’ve got to stick to your guns. Otherwise, the other guys will walk all over you. You have to be strong spirited for sure.”

MUSES IN THE KITCHEN:

“I find inspiration from the people I’m running shoulder to shoulder with. Those are the people I learn the most from. Like you ask the dish dude in the back about mole, and the next thing you know the dishwasher is banging out the sickest mole that you’ll keep with you for your whole career. So inspiration can come from anywhere.”

A MOUTHFUL OF WHAT?

“We have something at Kru called shirako. It’s basically the sperm sac of a cod. One day Billy [Ngo] came to me with five pieces of something and four of us cooks ate it. We asked him what it was and he said, “Semen.” Then he walked away and laughed his ass off.”

WISDOM OF HIS PEERS:

“Pajo Bruich taught me not to be afraid of failure. I was his sous chef at Enotria. When I was young, I would hear that from people but I didn’t get it. When I was working with Pajo, I finally got it. I’m such a worrying person, and Pajo and I had a lot of talks about that, sometimes with tears in both our eyes. He is a fearless dude.”

LIFE BEYOND THE KITCHEN:

“I like the idea of finding balance in life. People who run ragged doing one thing can get burned out. One of the things that I like to do most is fishing. I like being in the outdoors. I love animals and plants and nature. I couldn’t cook in New York or San Francisco or Los Angeles. I need to be able to have a retreat. I need to feel the wind and listen to the birds. I need nature. That’s why Sacramento is perfect.”