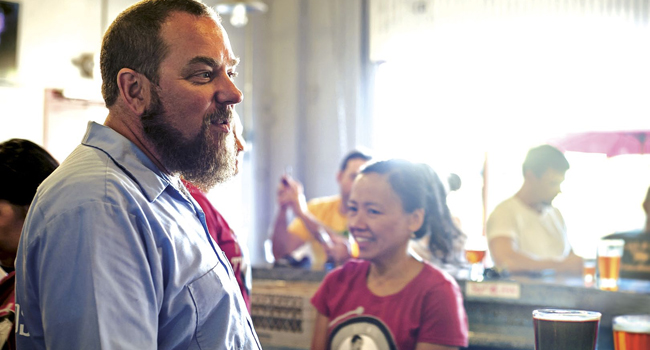 The story of how Dan Murphy went from home brewer to brewery owner is practically a cliché: For years, his friends told him that his beer was so good, he should sell it.

If every amateur brewer who ever heard those words started a business, the streets of every town and city in America would be clogged with microbreweries. The reason they’re not is simple: It’s not so easy to open a brewery—as Murphy discovered.

Three years ago, Murphy was working as a network engineer when he decided to open Twelve Rounds Brewing Company. He found a location: a 3,000-square-foot building in East Sac that had once been an antique consignment center. His wife, Elle, a senior management analyst for the city of Woodland, wrote up a business plan. The couple got an SBA loan and started gutting the building. They figured it would take about a year to get the brewery up and going.

Then the problems started. Originally, they thought about opening a brewery and small bottle shop. But when they learned that they would pay significantly less in city fees if the brewery served food, they decided to put in a small kitchen. That’s when they discovered the building didn’t have enough electrical power to support a restaurant. Electrical work caused costs to balloon. While they scrambled for more money, their original SBA loan was canceled. This happened during the government shutdown, making it hard for the couple to line up new financing. Meanwhile, the Seattle brewmaster they’d hired found another job. “I wanted to walk away,” Murphy says. “Elle said, ‘Nope. We can do it.’” Murphy quit his job only two months before opening Twelve Rounds. Experienced brewmaster Scott Cramlet, formerly with Rubicon Brewing Company, also came on board. “He’s the smartest brewer I’ve ever met,” says Murphy. “And I’ve met a lot of them.”

Cramlet was put in charge of setting up the gleaming stainless-steel brewery equipment behind the tasting room. The tight quarters include a grain mill; a mash tun, where the milled grain is mixed with water so the starches can be converted to sugar; a boil kettle, where the liquid wort from the mash tun is heated and the hops are added; four 15-barrel fermenters; four brite tanks to carbonate and hold the beer; and a cold room where the beer is chilled and stored. There’s also Murphy’s 25-gallon home-brew rig, which he still uses to make small batches.

The brewery has a dozen taps, but right now it serves only eight beers—all brewed in-house. There’s The Haymaker, a traditional Bavarian hefeweizen: unfiltered, low alcohol, not a lot of hops. The Usual is a malty lager—“the typical beer they drank in the Old West when you’d walk into a saloon,” says Murphy. A pale ale called Round One was a collaboration between Murphy and Cramlet, made with Cascade and Galena hops. The house IPA, called Uppercut, is a beer Murphy has been making at home for years, using mostly Centennial hops.

Knock-Out Stout is a rich, creamy chocolate stout, made with cocoa nibs and fresh-roasted Kenyan coffee from Entimos, a Roseville microroaster. “They’re geeks about coffee like we’re geeks about beer,” Murphy says. Cramlet created a golden ale called Golden Gloves. Two heavier beers were recently added to the lineup: C4, a double IPA made with four varieties of hops, and Sneaky Peat, a Scottish wee heavy made with peated malt. Eventually, Murphy plans to serve 12 beers, bringing on a new recipe every couple of months. The kitchen is also a work in progress. Murphy partnered with the owners of The Red Rabbit to run the food program, which will focus on small plates, mostly charcuterie. That won’t happen until sometime next year. In the meantime, customers can order food from nearby Evan’s Kitchen and Hot City Pizza, and food trucks make regular appearances as well.

It seems like a new craft brewery opens in Sacramento practically every month. Twelve Rounds joins a long list of local microbreweries: Bike Dog, Track 7, New Helvetia, New Glory, Oak Park Brewing, on and on and on. Murphy thinks Sacramento is set to be the new Portland, beerwise. “I welcome more breweries,” he says. “I think there’s plenty of room.”